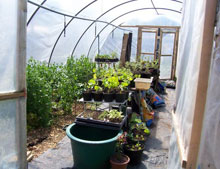 Tunnels are a very useful tool for starting early crops. Do remember though that they don’t keep out the frost – only the more damaging side of winter. More plants die from wet cold roots than below zero temperatures. The ground can be mulched early with fleece to warm it up and give seed sowing a head start.

Seeds such as broad beans should be planted at your favoured time (I usually sow mine in November/December) and the reward from using plastic is tender beans as early as March. Winter greens (kale, purple sprouting broccoli etc) should be planted over-winter without the ravages of the harsher winds and rain.

Peas and spinach can be started in January but beware; there are hungry mice around at this time and they adore large seeds. Keep a check on them (or a cat!) and you may find you have to re-sow. The old organic method was to soak the seeds in paraffin to make them distasteful to mice but I have never been tempted to try!

Come the summer with its higher temperatures the tunnel becomes all but redundant, (with care it can earn its keep working fully filled nine months of the year) although melons, courgettes and pumpkins tend to like basking in the extra heat. Remember to keep up with the watering –
moisture evaporates very quickly under the summer sun. A piece of shading tucked under the polythene will reduce loss of moisture and give the plants a bit of cool at the hottest part of the day.

Your summer pots of slightly tender perennial flowers-scented geraniums, yuccas, small acers – will spend the winter quite happily under a covering of fleece in the tunnel, as will cuttings from shrubs and hardier plants.

A few tomato plants sown later in large pots will keep producing tomatoes till much later than your plants in the garden.

A glass lean-to or greenhouse that has a frost protection heater will take care of plants and seedlings that will be killed by frosts. It’s also a good space to start early tender seeds – tomatoes, geraniums etc.

•With thanks to Sheilah Kennedy