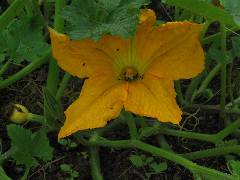 Many plants can get infested with tiny black bugs? What are they?

Called the common pollen beetle (Meligethes aeneus) or méligèthes in French are attracted to anything yellow, although often they are found on other plants as well.
Although the beetles eat pollen they are unlikely to destroy your plants. To farmers who have oil seed rape crops, however, they are considered a pest as the adult beetles colonise oilseed rape buds at the end or winter or early spring and when the females are mature they lay up to 200 eggs. The eggs incubate for ten days and the insect goes through three larvae stages before emerging as an adult.

Usually, this does not occur until mid-June but this year’s warm April has accelerated their development. However, they are expected to be gone by the beginning of August.
The bugs are becoming increasingly common in areas where oil seed rape is grown as this yellow crop is being planted in greater numbers, and is expected to rise due to its use in bio-fuels.

Also, the pollen bettles has developed years they have built up immunity to the insecticide that has been used to control them.