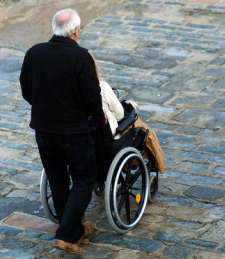 A recent survey conducted by France-Info and Le Monde revealed that more than half of us are ‘concerned’ by the prospect of losing our autonomy. This is not surprising as improvements in medicine lead to longer lives and increase the likelihood that recourse to a medical home or qualified assistance may one day become a necessity. Charles M. Wilson, Chairman of Exclusive Healthcare, suggests how an appropriate health insurance policy could help safeguard our independence.

– Each year in France 225,000 more people are afflicted by degenerative illnesses

– 30% of men and 45% of women aged 65, and living in this country today, will be confronted with total dependency

The French government has identified the problem and its potential cost and given it a name: Le 5ème Risque, which needs no translation. It was part of President Sarkozy’s electoral program, but whilst the will is still there the means (for the State) to provide solutions have clearly diminished in recent times. In these circumstances we believe that fiscal incitation is very unlikely – perceived by the left as another gift to the rich and also contrary to the government’s formal intention to reduce the impact of fiscal niches.

It is probable that the destitute will be taken care of (as now) and the wealthy left to look after themselves. For the middle (economic) class a formula called Allocation Unique Dégressive (AUD) is envisaged, involving a mortgage on assets, recovered by the State at the time of death as a deduction from family inheritance.

The pattern of cover offered is similar:

– Maximum age at subscription is from 70 to 77 years old

– 10% reduction in cost for couples

– Partial dependency can be covered, at an additional cost of roughly 50%

– Reduced guarantee maintained after a number of years of consecutive premiums

– Waiting periods of one year for general illness dependency, going up to three years for Alzheimer’s

– Practical assistance should the problem arise

The cost (monthly premium) varies little, since everyone is referring to the same actuarial tables and medical experience.

– The average age at which people subscribe to such an insurance policy is 62, which suggests that individuals are choosing an insurance solution from 50 to 75 years of age.

– The earlier the person starts the lower the monthly premium.

– Indemnities can be paid overseas.

A man or woman subscribes at 62 years of age and selects a monthly indemnity at the level of €1,400 (These indemnities are tax free). Approximate monthly premium is €66. If a spouse enters the scheme at the same time, in many cases both premiums will be reduced by 10%.

Assuming the spouse is four years younger (58) the combined monthly premiums will be in the region of €110. After 18 years of uninterrupted premium payments (in this case at the age of 80) the insured may retain a monthly guarantee of €600 even if no more premiums are paid.

We consider that such an insurance policy can seriously soften the blow financially should lost of autonomy occur. It may enable a family to afford qualified assistance at home or help finance the cost of a high standard medical residence, without resort to selling precious belongings. It is particularly relevant for a couple, when the sale of the family home is not an option to contemplate.

It may be psychologically difficult for a person to insure his or her own dependency and so there could be a case for bringing in the children, (who may have to become involved financially) on the decision.

It might also be worthwhile to weigh up the pros and cons of protecting yourself against la double peine; loss of autonomy and loss of money.

Exclusive Healthcare specialises in health insurance for English speaking residents in France. We offer a range of policies designed to meet the needs of people moving to France at every stage and in all circumstances. From private policy to Health top up cover in France. We are more than an insurer, we are a helping hand. Find out more

At Swisslife we provide health insurance for expats in France whether you are entitled to the French health system or not. We also provide banking, travel, home, car and motorbike insurance. 60% of our business is through recommendation and we are very proud of that.
Find out more