David I. explains all 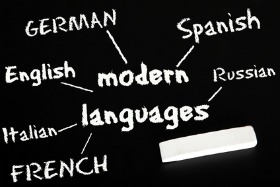 Over the years lots of language students have decided to choose to learn Spanish rather than French in the belief that the French language is much more difficult. Actually, French is much easier than you ever expect…

For example, take the English adverb, “rapidly”. In French you would change the ‘ly’ to ‘ent’ and get ‘rapidement’. You see? The words almost the same. Let’s take the English word ‘investigation’. In French the word is the same, ‘investigation’. Thus, you will already know thousands of words in French right from the very beginning of your studies.

A lot of people shy away from French due to the belief that the pronunciation is too difficult and much harder than Spanish. While the French language is less phonetic than Spanish the pronunciation is not impossible to learn and can be mastered by most students in a matter of hours or days. Furthermore, there are lots of set patterns which make learning easier. For example, ‘ais’ and ‘ait’ are always pronounced ‘ay’ while ‘ois’ and ‘oit’ are always pronounced ‘wah’.

When it comes to the verb, “to be”, French is much easier than Spanish. This is because in French there is only one word for to be: “être”. In Spanish there are two ways of saying to be: ser and estar. These two different ways of saying ‘to be’ can cause a lot of confusion for beginners and even intermediate and advanced-level students. When studying French you do not have to deal with this issue.

Finally, when you start looking at more complex grammar you will quickly realize that French is far easier than Spanish. For example, learning the past tense of French (the passé composé) is much easier than Spanish. In Spanish, you must a learn a different verb ending for each person while in French you only change the ending of an auxiliary verb and the past participle remains the same for each person. Also, when you start moving into advanced verb tenses such as the subjunctive mood you will discover that memorizing the Spanish verb tables is much more tedious.

French is one of the nicest sounding languages in the world and you will certainly be very happy you made the choice to learn this beautiful language!

Guest article contributed by David I. from FrenchLearner.com – learn French with hundreds of free audio lessons.