Glorious game, hunting for your supper

Hunting in Limousin is far removed from the traditional view we hold of hunting back in the U.K. There are no horses with riders in their distinctive red garb thundering around the countryside, instead peasant farmers sporting plastic fluorescent jackets rumble around the country lanes in battered old Renault 4 vans, towing homemade trailers packed with assorted baying hounds.

Here in Limousin the hunt usually takes place on a Sunday mornings when a few neighbours and their dogs band together to go out and bag some lunch. Whilst there is a tendency to shoot everything that moves, rabbits and hares are amongst the most popular of their targets. As descendants of long lines of countrymen the rural hunters are usually well acquainted with the runs of the local wildlife and position their group strategically so the prey has little chance of escape. 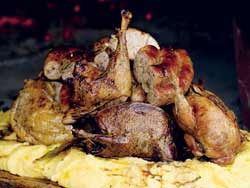 The hunt, is an important source of free food and much like the mushrooms and chestnuts also provided by nature in the region forms the basis of many of the traditional Limousin family meals.

Before the revolution, hunting was the preserve of the aristocracy and so poaching was a common activity. In a bid to control poaching hunting permits were introduced around 1844. Years over battling between landowners, poachers, peasants and gendarmes over hunting rights finally led to a reduced rate hunting permit that provided 400,000 citizens the right to hunt their own food.

Excessive hunting, farming methods and pesticides have all taken their toll on the Limousin wildlife which is nowhere near as abundant as it once and so more “game” animals are now specifically bred for the table rather than hunted, although many believe the taste to be vastly inferior.

La Chasse in Limousin is almost an entirely male preserve with the cooking left to the women with the possible exception of the cleaning and preparation of the meat.

The night before cooking

Cut the rabbit, set aside the liver and rinse with vinegar
Peel onions, carrots, put the rabbit and vegetables in a bowl with a few pepper corns, the rest of vinegar, 2 spoonfuls of oil. Mix and cover with half of the wine.
In another bowl soak prunes in the rest of the wine.

Day of Cooking
Remove the rabbit and alow to drain.
Melt the butter with 2 spoons of oil, then brown the rabbit, remove and keep warm.
Brown the bacon then add; small onions, the rabbit, sprinkle with the flour; stir well, then add the wine and prunes.
Add garlic, thyme, bay or sage, pour juice the sieved juice from the marinade
Cover and simmer for 1 hour.
Add prunes,
Cook for an additional 30 minutes.
Finely chop the grilled liver and add to the stew at the end of cooking..
Sprinkle with freshly chopped parsley just before serving

A simple version of this rich wild boar stew

Add a little water as necessary and simmer on a low heat for several hours.

Previous Article Living and working in Burgundy
Next Article Setting up in France: SARL or SCI?