The Association Saint Hippolyte Aquitaine (ASHA for short) is a horse charity in France named after an Italian priest who since the Middle Ages has been considered a patron saint of horses. In France, Saint Hippolyte is also known as the patron saint of prisoners, which is very apt as many sick horses are so traumatised by their situation that they become prisoners of their own minds.

ASHA aims to eradicate these psychological problems so that horses can be re-introduced to society and fulfil a useful life as a working animal and get back their self respect. As word spreads of the association, ASHA is receiving more and more calls to look at and in some cases rescue, horses, ponies and donkeys in distress.

Much of the suffering caused is simply due to a lack of knowledge on the half of the owner who loves the animal but does not really know how to care for it. It is ASHA’s policy wherever possible to send out someone to liaise with the owner and help them to provide the appropriate care.

Many horses are rescued, treated of their ailments and passed on for adoption. They usually they go to a sanctuary or adoptive home where they are well cared for and loved with perhaps a bit of gentle riding as well. However, some horses develop severe psychological problems making this impossible.

Helen Green runs a riding establishment near Paulhiac; she is trained in natural horsemanship and uses these skills to help rehabilitate horses for ASHA. It was while working at the Colorado Horse Sanctuary in America that Helen realised the only stumbling block between a horse and rider, who want to act as one, is that of communication. Her expertise is invaluable in the re-education of horses that others have given up on.

Last year, Helen found a yearling ‘dumped’ in the road outside her property in France. Dido had very long feet, causing bad posture and a bad back, a coat encrusted with dirt and crawling with ticks, worms and an umbilical hernia. These were only the obvious problems.

What do you do when a person or an animal in need turns up on your doorstep? The ‘Good Samaritan’ in us would say ‘Yes, I will help’. This is easily done with a cat or a dog, even a person, but a horse? Horses being a little larger than a household pet are perhaps not such an easy decision. 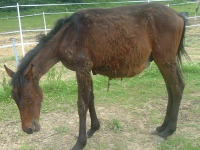 A group of regulars to Helen’s equestrian centre felt that the costs involved with Dido’s recuperation should not be borne by her alone and collections were started. From this beginning, the idea of a charitable organisation was planted.

Several of ASHA’s rescue horses have been adopted by new owners. They have been taken from a miserable existence, restored to full health and where necessary, retrained and have now moved on to happy, useful and caring lives with humans and other horses who love them. One aim when re-homing a horse is to make sure that not only is the horse right for the owner, but that the owner is right for the horse.

An example of a success story is that of Toto, a mule that was much loved by its owner but due to a combination of circumstances was badly in need of treatment for its feet. The full story is available online and shows just how much can be achieved with knowledge and understanding.

Sadly, not every story has a happy ending. Rocky was a little pony that had been so badly neglected that by the time ASHA heard about him and took him under its wing that it was too late. He died after a few days at the centre. The only consolation was that his final days were surrounded by love and comfort. 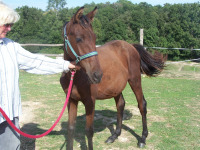 Now what of Dido, that poor little waif who was dumped? Well see for yourselves. What a little star he is!

If anything here has touched a cord with you, please log onto ASHA’s website for more information. Perhaps you have some rescue stories of your own to share or maybe you are a bit disturbed by the horse down the road and you do not know who to contact. ASHA would love to hear from you.