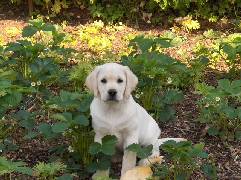 Which pets have to be identichipped?

Dogs and cats need to be identichipped. Small pets such as rabbits, guinea pigs and hamsters require no rabies vaccinations or identichipping when travelling. Birds such as owls or parrots can be identichipped. It is quite a painful procedure in their breast muscle, but I imagine that if you spend a few thousand pounds on an African grey parrot, you do not want to lose it!

What is involved when my pet is identichipped?

An identichip is about the size of a rice grain and is injected through the skin between your dog’s shoulder blades over their back whilst they are conscious. It IS a painful injection but is over in two seconds and its value lasts your pet a lifetime. Some animals bleed slightly and some owners choose to have it done only when their pet is under anaesthesia for a routine procedure such as neutering. I have advised this when a client’s pet is very sensitive and even the regular vaccination has been painful for their pet.

Once the identichip is implanted, it is checked with the scanner (some identichips can travel right through the skin and land on the table – yes it has happened to me and I felt dreadful having to repeat the procedure in a sweet-natured Shih-Tzu!). A form is then filled out with all your contact details and your pets own ‘barcode’. This takes about 10 days to process through an identification company and then your pet can be identified properly for the rest of its days and you can begin the process of obtaining a passport to travel with your pet abroad.

The information stored on a microchip implant is held on a central computer (The National Register) allowing owners to be found quickly. Remember to let the company know of any change in your address or your phone numbers. They will charge a small fee to change your address.

Any stray that is handed to a veterinary surgery or rescue centre, is immediately checked for an id chip. I have only ever seen one case where the chip proved invaluable. An incredibly friendly cat turned up at the house down the road to where it lived and made itself at home. It was not a particularly valuable cat financially (there ARE cases of theft of pedigreed dogs or cats), but the new owners were desperate to keep him. I scanned him when he came in for routine vaccinations and the new owners were very upset to see that he already had a loving home further down the road. The old owners were thrilled and were so close to nearly losing their people-loving cat.

It is a requirement for the Pets Passport as each animal is scanned at the port when it enters and exits a country. The vet giving rabies vaccinations prior to travel also has to check that the identichip is in place before this can be given. 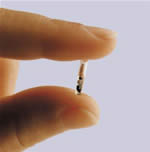 What exactly is a Microchip or Identichip?
A microchip is a small tube about the size of a grain of rice that contains a unique code or identification number. The chip is made of an inert material which means that it has no power source and won’t be rejected by your pet’s body. To retrieve your pet’s identification number, a scanner is passed over their body, this sends out a magnetic field, which picks up the 15 letter code imprinted on the chip. This code shows up automatically on the scanner’s screen; the owner can be identified from this code and be contacted via the computer database.
There is a multi-functional new chip that has been produced recently and not all surgeries stock it. It is called a Thermochip and is slightly longer than the regular chip but the needle is the same size that is inserted through the skin. It reads the animal’s temperature as well as its individual barcode, so no more uncomfortable thermometers up some lucky pets’ bottoms in surgeries that do stock it.

Some chips can migrate in the skin. I have seen a few such cases. One was a very bouncy Weimeraner called Fred. When he turned 2 and the owners wanted to apply for his Pets Passport, I scanned him over his shoulders to locate the chip and it had disappeared. It took a while to get Fred to stand still long enough so that I could locate it by scanning all over his body, but it had migrated down his front leg. He had it removed under anaesthesia and the identichip company allowed him a new one for free. This can happen in loose-skinned or very boisterous dogs like Fred. A puppy usually cannot be microchipped before the age of 10 weeks for this reason and it can be too painful in such a tiny pup.

What kind of identichip do I need for travel France?

If you are planning to take your pet abroad you should make enquiries about the type of identichip being implanted in your pet. There is some international agreement on identichip standards so that identichips implanted in one country should be readable in others.
Where possible ISO (International Standards Organisation) Standard identichip meeting specification 11784 or Annex A to 11785 should be used. It is likely that vets in Europe will have readers for these chips.
If the identichip does not conform to these standards, it may not be able to be read by a standard identichip reader when the animal is checked at the time of travel to the UK or when in a European PETS country. If your pet does not have a standard identichip you should carry your own appropriate reader when travelling with your pet. This is an extra expense to purchase this but your alternative is for your pet to have an anaesthetic and the old chip removed and a new one implanted. Your pet may need an x-ray to locate the old chip.

•With thanks to Arielle Griffiths, BVSc MRCVS 2007