An Aussie in Limousin 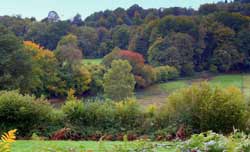 French Entrée-Limousin receives around 13,000 unique visitors each month. Predominantly from the UK and France, but also from all over the English speaking world in particular the USA and Australia.

We have regular contributions from British citizens who have made the Limousin their home or who have bought a place here for holidays and we come across a whole host of reasons for the move.

The slower pace of life, the green rolling landscapes, the seemingly endless woodlands and lakes, the calm and tranquility…… Need we go on? 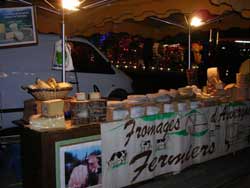 So we thought it would be interesting to find out what a young Australian currently travelling through Europe thinks of the Limousin.

Sean Whelan is a 19 year old civil engineering student who is using his gap year to spend some time in Europe.

Shaun still has plenty of links with the UK as his mum is originally from Yorkshire and his dad from Kildaire in Ireland.

Sean has spent time with his family there but has chosen to spend a large chunk of his stay in France and in particular Limousin, before heading off for a final circuit of Europe taking in Spain, Italy, Croatia, Germany and Holland to name but a few! 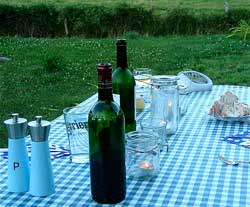 When Sean first arrived in France he took an overnight train to Montpelier, keen to take a dip in the much heralded Mediterranean sea. First he stocked up on provisions for the journey, buying a fresh crusty baguette, saucissse sec, chunk of tasty cheese and a bottle of champagne, keen to adopt the French style from the outset!

The whole experience he describes as “awesome”

After his trip south he returned to stay with family friends in the Arcachon basin , just south of Bordeaux. Sean tells us that the seafood there was awesome, a word he seems to use a lot when describing all things French. Although Oysters are available to him in Sydney he says the price and quality of the oysters he enjoyed in France were second to none. The sea food, I understand, was washed down with bottles of good white wine. Sean proceeds to rave about the French wine, I am a little surprised as Australian wine is so popular now, particularly in the UK. Sean assures me that the Australians produce great wine but at the cheaper end of the market it can be a bit “ropey” but in France there is some great low priced “vin de table” that is really “mellow”.

Next, Sean visited Biarritz, another awesome experience with great surfing, nightlife and a chance to catch up with a few fellow Aussies also travelling through Europe. After some serious surfing and heavy partying Sean made his way to Limousin. 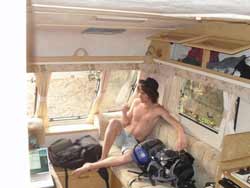 Sean has now been in the Limousin for a couple of months, staying in a caravan at his uncle’s place.

So what does he think of our green and pleasant region?

Being born and bred in Australia old buildings are also something of a novelty for Sean, who finds it incredible that every Limousin village he has passed through is made up of wonderful old properties and stunning churches. Overall he says the area is just a great mixture of quaint and fascinating architecture and beautiful scenery.

So what has he been doing since he got here?

His uncle is currently renovating his property so Sean has been helping out by chopping firewood for the winter and has just fallen in love with the outdoor lifestyle. The biggest shock to Sean so far has been the weather. When Sean arrived we were experiencing lovely hot summer weather and as the temperatures start to fall he finds the change amazing. Whilst he loves the wonderful colours as the Autumn arrives, -7° was a bit of a shock “40° to -7° in a couple of months is an awesome climate”. 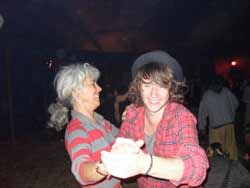 As Sean’s uncle is well integrated in to local life he has had the chance to attend several events and gatherings which he has thoroughly enjoyed as it has been a real chance to see a slice of French life, something that is not always easy to achieve when just travelling through an area. He says one event he particularly enjoyed was a local juggling festival where he partied in to the small hours his linguistic skills apparently improving with every beer.

He loves the food here but his favourite item on the menu is always the cheese, loving it all, but singling out the stronger blue cheeses for a special mention.

He has been in to Limoges a couple of times but generally the lack of any easily accessible night life is a bit of a problem for a young Aussie who likes to party!

So would he ever consider living here?

He tells me that he could never imagine living here permanently but then he also tells me he cannot imagine what it would be like to be over 40 so who knows!

He says it is an area he would certainly like to return to one day, perhaps even bringing his wife and children but thoughts of such things are still a long way off for someone who has a lot more exploring and partying to do yet!

In a class of their own in Tarn: Real Life in France