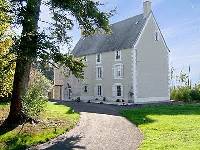 Four years ago, when Corinne and Donald Dingley left the north of England for France they hoped they were leaving their bad luck behind them. After years of successfully running an equestrian business, they were brought to their knees in just six months thanks to foot and mouth disease. ‘Our animals weren’t affected but for six months nothing was allowed to go in or out so we had no income,’ says Corinne. ‘And because we weren’t farmers we didn’t get any compensation at all.’

Until then the couple had 40 horses, and as well as teaching up to 180 people a week rode professionally too. Corinne had also started up a catering business providing meals for business lunches, and birthday and dinner parties. ‘I just love cooking and it was something I had always wanted to do,’ she says.

The couple led extremely busy lives – until foot and mouth struck. ‘And that’s when we realised there was more to life than working 7/7,’ says Corinne. ‘Until then we’d not had time for anything else, even ourselves. We were lucky if we sat down to one meal as a family a week; I saw my children for five minutes a day. It was too late to change things for my daughter, but I knew I didn’t want to bring my son Dominic up that way.’

Having holidayed in France and liked the country they decided the best way to recover, both financially and emotionally, was to move here and start again. ‘But doing things differently,’ says Corinne.

The couple bought a 15th century chateau in the Deux-Sevres (left) that came with numerous outbuildings and three acres of land, with plans to run a Chambre d’hotes business of five rooms in the chateau. But even here bad luck has dogged them.

‘We arrived in 2002 and spent the first year getting ready,’ says Corinne. ‘The place wasn’t run-down but it needed a lot of work. The previous owners used to buy up shops as they went into liquidation so there was a lot to clear away – the outbuildings were full of the strangest things. We got rid of 3,000 pairs of Wellington boots, hundreds of buttons, rubber ducks, wallpaper rolls from the fifties and sixties, pallets of tiles, all sort of things.’

The renovation work wasn’t without its problems – the first plumber, a Brit, plumbed the toilet with hot water, and connected another loo so badly that it leaked. But finally, after months of building, painting and decorating, the Digleys opened for business in the summer of 2003.

And at first it went well. Slowly but surely they started to build the business, with guests from all over the world, as well as bookings for special occasions such as weddings. Then at about 8.30am one morning in July 2005, one of Corinne’s guests shouted ‘fire!’ ‘I thought he was joking,’ says Corinne. ‘But then I looked out of the window and realised that he wasn’t.’

The fire, which grew hotter and more ferocious by the minute, was burning in what had been the original farmhouse on the property, pre-dating the chateau. A three-storey building plus a cave it was filled with everything Corinne needed for a 110-guest wedding that was booked for the following week. ‘There were tables, chairs, torches, lights for the trees, plus spare furniture, some lovely original stained glass doors that the previous owners had removed form the chateau,’ she says. ‘It was built of wood so everything was combustible.’

The fire brigade took 30 minutes to arrive, and while they were waiting Corinne and Donald tried to save the 1,000 bottles of wine and champagne that were in the cellar. ‘We held a hose over ourselves and went in and out until getting out as much as we could,’ says Corinne. Amazingly, they saved all bar about 180 bottles.

The three fire engines worked until 9pm that night to put out the fire, thought to have been started by an electrical fault. In the morning Corinne and Donald were left with a smoking ruin. ‘I sat down and had a good cry,’ says Corinne. And then got on with clearing it all away for the wedding.

‘Our French neighbour was fantastic,’ says Corinne. ‘He used his tractor to haul everything away. The mayor gave me tables and chairs from the salle de fetes but I had to buy everything else again. It was worth it, though, because the wedding was lovely.’

It wasn’t until the November that the insurers agreed to compensate the couple, although this only covers about 80% of their cost. In January 2006 the rebuilding work began (see left) and it has been so extensive that the couple decided to close the chambre d’hote business until it was finished. ‘It has been very noisy and disruptive,’ explains Corinne. ‘We’ve had to put in beams that are 40ft long and 2 ft square, and they needed a 60 tonne crane.’

Again, the financial implications have been tough. ‘We were lucky to have some money left over from the sale of our place in England otherwise we wouldn’t have made it,’ says Corinne. The couple are almost there, though, and plan to open for business in March 2007.

This time, as well as chambre d’hotes there will also be a restaurant. Housed in the restored building and aptly called ‘Phoenix’, it will serve French and international food cooked by Corinne. Unusually, the seating area will be in the cave, with the kitchen on the ground floor. ‘I have been to a couple of restaurants like that in France and really liked it,’ says Corinne. ‘They have a very special atmosphere. Also the cave has a history – it was where the resistance operated from, and it is one end of an underground tunnel and let outside the grounds.’

Today the couple are looking to the future, confident that the worst is behind them. Despite the trauma of the fire, they have no regrets about their move to France. ‘We love living here,’ she says. ‘We’re closer as a family and we have fun together. We really are very happy.’