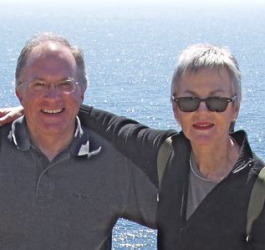 Jane and Ron Bennett live near Cambridge and have a property, Au Chicot, in the Gers (Midi-Pyrénées) that they rent out to holidaymakers. Whilst the couple intend to spend more time at their farmhouse in France once Ron has retired from his job as a lawyer, their investment has already brought with it a career change for Jane. Having previously worked as a speech and language therapist, she now acts as director of a small company called Your Holiday Matters that rewards ‘holiday property owners who care’.

How long have you had a property in the Gers?
Since October 2004, but we agreed not to obtain vacant possession until April 2005 so that our vendors could live there during the winter while their future home was made habitable. We needed to begin marketing the property before we moved in, and the vendors had some wonderful things.

People expected photos of course, so it was the vendors’ interiors that I had to display on our advertising initially! Presenting the house in a way that wouldn’t disappoint when the first batch of guests rolled up was quite a challenge and I’d nervously say to people “There will be a few changes to the furniture and accessories when you arrive”. We matched their style as closely as we could (but on a lower budget!) and fortunately everyone was happy.

What attracted you to France and this area in particular?
Over the years, we visited France regularly. It’s one of the easiest countries to access from the UK of course, and we love all things French! I had the added benefit of five years of French – being able to converse with the locals and even share the odd joke really adds another dimension when visiting any foreign country.

We first bought a tiny terraced house or maison de pêcheur on a development of six properties Le Rayol-Canadel on a relatively unspoilt stretch of the Côte d’Azur. For four years we had wonderful relaxing holidays. There had been some disappointing changes to the development over that time however, so we sold to our neighbours who were looking to knock through.

Wanting to buy again, we initially searched in the same area, before concluding that our brief for the next property and the modesty of our purse would never be reconciled there! Some years previously, when we were first making contact with agents, a Brit with a holiday home in the Vienne said something I had never forgotten: “If I were house-hunting now, I would focus on the Gers”. I hadn’t even heard of this department at the time, even though it forms the major part of Gascony. The agent described it as a small-scale Tuscany with cheaper properties.

Describe your property.
Au Chicot was converted sympathetically from a tiny farmhouse and its adjoining barn, stable and garage. The vendors were American architects and the house is now a well-planned, light, airy and very comfortable home packed with character. There is a lot of exposed stone and beams, high ceilings, a rustic staircase, solid wood floors and three large fireplaces. Sleeping 8 + baby, the house is furnished with a careful mix of French country antiques and quality contemporary pieces. The house sits neatly at the head of a plateau, on three acres of land, and is surrounded by fields of sunflowers and vineyards. Though in a tiny hamlet, Au Chicot is the perfect retreat for those seeking total peace, quiet and privacy. The views, which can be appreciated from most of the rooms, are very special – not a telegraph pole in sight!

Was the property search a long one?
A year on and off, although initially we had had a lower budget. Finally, we fell for Au Chicot which was larger and more expensive: a case of heart ruling head! The decision to share it with other holidaymakers was rather made for us.

What work has been done since you bought it?
Apart from maintenance, some more planting, extending the tiled pool area and the lawn (previously field) installing the electrically operated pool cover and minor bits and pieces. The builders our vendors employed were local.

How have you arranged the property to achieve maximum rental potential?
I think it helps to have twin beds in some, if not all double rooms to offer greater flexibility when families with children come to stay. When groups of adults come, the twins can be joined to make a super-king sized bed. The accommodation is roughly the same on each floor: two double bedrooms and two bathrooms, so if two groups of friends come to stay, they are offered a degree of independence and privacy. We offer Thursday changeover day in high season, which many guests see as an advantage as flights and ferry crossings tend to be cheaper mid-week than at the weekend.

Is it difficult to manage the rental of your holiday home from the other side of the Channel?
I’d rather be nearby and have a bit more control but we have acquired a super team (two ladies who do the changeovers and a caretaker to look after the pool and grounds and to check the property when it’s unoccupied.) They are well versed on how I like the property presented and the standards to be met. All three are terrific at communicating by phone or email, so we have great peace of mind.

How much time do you spend at your holiday home and what do you do when you are there?
Not nearly as much as we’d hoped and when we are there it is usually for a flying visit – we always end up fine tuning the house or going in quest of an item which is perhaps looking a bit tired. We do love to explore the region though, either by car or on foot, (I never tire of doing this!) cook at home having bought the ingredients at a local market or visit one of the many great restaurants close by. When Ron eventually retires, we will be able to relax there properly and make a few more local friends. We do mean to keep renting Au Chicot to holidaymakers, but not for as many weeks!

When do you think you might make the move to France?
Originally a relocation was thought about but we have just sold our home in the UK and bought a small cottage there, (a lock-up-and-leave) as we concluded that it would be a mistake to burn our bridges completely. We still have very close family in England anyway: our daughter and Ron’s parents.

What advice could you give to people who would like to do a similar thing as you?
Get hold of every book on the subject that you can and research your area (particularly the weather out of season). Familiarise yourself with the ins and outs of the buying process. If you’re buying something renovated, I would still get a qualified person to survey it, if only informally as this is not a universal practice in France.

What would have been ideal for us, had we initially intended to rent out a holiday home, would have been to buy two properties, either on the same plot or close to each other. In this way, we could have enjoyed more holidays there in the summer instead of counting the cost! It would have enabled us to have had more hands on involvement too.

If you are going to rent your property out to holidaymakers, be open to learning how to do it effectively. It is amazing how people think that all they need to do is advertise it and wait for the bookings to roll in. I am now a director of a small company whose owner members share the same ethos as I do. We want to give our guests the best holiday possible and that takes effort! The rewards in terms of feedback make it all worthwhile. We have actually met some of our guests now and made some lasting friendships.

Previous Article Useful French Phrases: Visiting a Spa in France
Next Article Transferring French Property out of a UK Company