In search of the good life 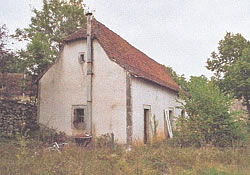 We moved into our 2 roomed house in the petit hameau of Blars in the Lot in September 2004. However, the purchase of a second property had not originally been part of the ’grand plan’ we had drawn up before leaving a lovely house in a mountain top village in North Wales. Having bought a semi-derelict barn in the village of Grezes, about 7kms down the road from Blars whilst on holiday in 2003, our original intention was to live in a caravan on site whilst we were ‘doing it up’. Visions of sun filled days working on site, with lazy lunch breaks in between, filled our heads.

However, having spent a cramped, fairly cold and uncomfortable two weeks during Christmas 2003 in the caravan – which was given to us free and is perfectly watertight but quite old and small – we had second thoughts. Caravan living in warm weather is fine but could we stand living in a caravan through a French winter or three until we could move into the renovated barn with a dog and two cats plus all the stuff we might bring over with us? 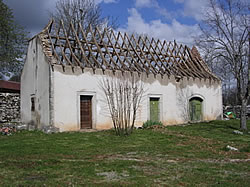 Showering facilities were primitive in the caravan, albeit resourcefully installed by David, and could we stand cooking, eating, sleeping and washing in so few square metres of space for an indefinite amount of time? Our hope was that we would get the go ahead on our Permis de Construire (planning permission) for the barn by the beginning of September 2004 when we planned to move over permanently, but what if it was refused? We would have no renovation project to be getting on with, even longer to have to live uncomfortably in the caravan and we would be ‘wasting’ money just kicking our heels rather than ‘investing’ it in a project.

So, returning in early June 2004 to the caravan at the barn for a holiday and to do some wall building and other jobs, we did a few sums and decided that we needed a fallback plan – a second property. This second property would need to be nearish to the barn in Grezes – (so we didn’t have too far to go home after a hard days work); would need to be habitable and have ‘sanitary facilities’ – (so we could have a shower, space for the animals, space for cooking/eating and sleeping at the end of the day); land so that we could grow vegetables, keep hens and an outbuilding of some sort, large enough for David to set up an ironwork workshop – (so if planning permission was refused on the barn we could at least fill our time and set up a small entreprise artisanale (crafts-type business) in decorative wrought iron work whilst we started the application process from scratch again). 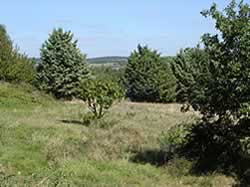 We quickly found our small house in Blars, which fitted all our criteria except for the one about having sanitary facilities. There were none at all as the house only had two rooms! But, with its proximity to Grezes, a good amount of workable land, a huge garage and a beautiful view, we both fell in love with it and decided that we could put up with a chemical toilet and washing at the sink for the time being!

Our plans for purchase were almost thwarted when a month before we were due to up sticks and move to France permanently, our house in North Wales had still not sold. All our plans were dependent on releasing money from the sale of the house and I reluctantly began investigating equity release schemes and bridging loans. Very reluctantly, because although David was still working, I had given notice on my job so we were facing the prospect of trying to find temporary work for me as well as potentially paying back even bigger loans/mortgage on possibly a single income. 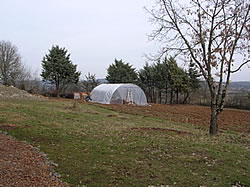 Fortune must have smiled on us because that very weekend, at the beginning of August 2004, a couple came to see our house having seen our advert on the Internet. Fortunately they had sold their house and wanted to complete the sale in four weeks. Parfait!

In the end, we had to spend nearly three weeks living in the caravan at the barn before we finally signed for the house in Blars and could move in. But this was fine as the weather was lovely and because we knew we would be moving shortly, any relative discomforts (like dog snoring and cats taking over most of the bed at night) were easier to deal with. 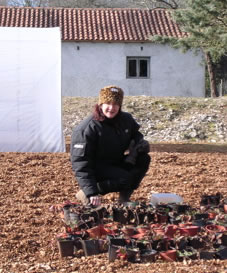 In the event, some of our ‘worst case scenario’ predictions came true. A few days before we left the UK we got a letter saying planning permission on the barn had been refused. The barn, like our house in Blars, is in the Parc Naturel Regional des Causses du Quercy and less than 500 metres from a dolmen – an ancient burial site. The application had had to go for approval to l’Architecte des Batiments de France and was refused because we had included too many skylight openings on the roof. The whole application would have to be done again with new plans taking another 3-6 months. This was a blow and we were bitterly disappointed but glad we had taken the plunge and bought a property we could live in whilst we started the application process again. It strengthened our resolve to plunge into the complex and bewildering world of setting up a business in France; something which has proved to be one of the most challenging learning experiences we’ve ever undertaken – not to mention expensive! However, that is what we wanted to do and, as, of 1st April 2005, David is the Chef d’Entreprise (head) and I am conjoint collaborateur (unpaid partner!) in Ironwood Motif, a decorative wrought ironwork and garden design/maintenance business. 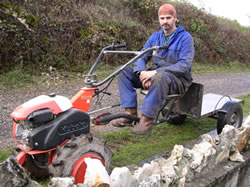 It also turned out to be a particularly cold winter so we were more than doubly glad of a cosy house to return to after a day’s work at the barn or in the garden at our house in Blars. We finally got our Permis de Construire for the barn in early January 2005, with conditions attached, of course.

So, between the end of September 2004 and the end of January 2005, when we started the compulsory Stage de Preparation de l’Installation – (setting up a business course) – at the Chambre de Metiers, we concentrated on trying to get the house and garden at Blars in order so we could be productive and comfortable. 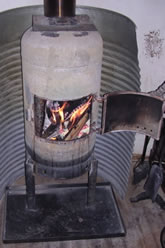 We’ve always been keen on recycling, reusing and renewing things where we can and life at Blars has presented us with many opportunities to do just that.
One of the great recycling successes has to be our gas bottle wood burning fire, which is now our heating source in the house. David had made it whilst we were in the UK as an extremely effective patio heater. It was a Mark II model; Mark I being smaller, with a less sophisticated door and airflow control mechanism and no ‘hotplate’ on top for heating kettles, pans etc. After buying some chimney pipe and attaching some legs to it to raise it from the wooden floor, David installed it at our house in Blars just before the first cold snap. Not pretty, but it throws out a lot of heat, is controllable and cost us very little.

Another thing we were keen to do was to make the garden/land at Blars as productive but as attractive as possible for two reasons. One was so that we could reduce our living costs by growing things for ourselves e.g. vegetables, keeping hens (for eggs and manure), but also so that our garden could be a living example of our skills in garden creation and design which would help to promote our business. We also wanted to adhere to the ‘recycle, reuse, renew’ principles wherever possible. This first year is a bit of an experiment to see what can and can’t be done. If you’d like to know more about how our little experiment is going, plus tips for gardening on solid rock with only a few inches of soil on top – watch this space!

Lindsay Nixon and David Low spend their time renovating a barn, running their ironwork and garden creation/maintenance business and creating a productive and attractive garden at their house in Blars.

For more information on Ironwood Motif visit David and Lindsay’s website www.ironwoodmotif.com, email them [email protected] or telephone on +33 (0)5 65 30 53 99.