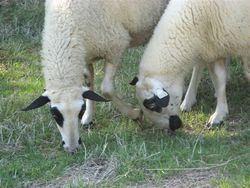 This is now my third little piece for French Entrée. Life progresses. We are still letting out our main house and moving out each summer. The letting market seems to have changed a fair bit over the last seven years, more single week lets, less careful guests, having to offer more to stand out from the many other properties offered for rent. For the first time this year we had a week un-let. Although I took full advantage of the situation and got the vegetable garden up to scratch, which was great.

We are about to start our third lambing season. The flock are all in pretty good condition now, despite the extreme weather this year. The heat of early spring suddenly gave way to cold and rain the day we did the shearing. We lost 2 from pneumonia because of it. The shearer has to be booked well ahead, so we couldn’t cancel him and we didn’t have enough barn space to house them all. Incidentally, if anyone would like the wool, they are more than welcome to it – as the market is dead and we just compost it. Then the wet late spring, again not good for the sheep as we had most of the pasture set aside for hay, which couldn’t be cut as it was continually wet. So they were on scrubby pasture and last year’s hay. Luckily being Caussonades (the old Lotois breed) they are pretty tough. They don’t grow huge carcasses but the taste and quality is excellent. They are also very easy to look after, good mothers and a friendly nature. 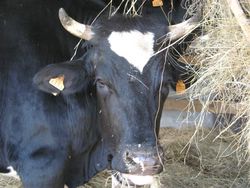 The cattle are also doing well and are nearly ready to go to the butcher. They are now 2 years old and looking marvellous. They again are very easy but much more difficult to handle unless you are fully equipped to restrain them. Just worming is quite a job, they are just so big and strong that one flick of their heads could end up in you being seriously injured. I don’t think we’ll be having more after these 2 have gone. They are such magnificent animals. Almost enough to turn you vegetarian, but not quite. They have been hand reared and fed on only the most natural of foods, just grass, hay and barley. Therefore a much better quality of life than most with no stress. Should be delicious and we’ll let the carcasses hang for a long time (a la Fearnley-Wittingstall). 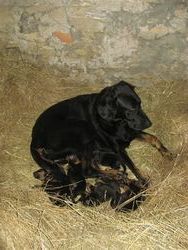 Petal, our faithful Beauceron dog has just had 5 beautiful puppies, all of whom have good homes to go to. We shall keep one bitch to try to train to help with the sheep. Although they were originally cow dogs, I’m sure they can adapt to the smaller woollier variety. If you look after them correctly they are great dogs. We had Petal’s mother before her and she being a rescue dog, following an unstable start to life, was not to be trusted with strangers (or some friends for that matter). So if you give them your all they will generally be a loyal friend for life.

Our sons are still at university in England. Samson just about to begin his final year in Bristol, studying Environmental Science and Marketing. He is now very happy and to help finance his studies works at Tesco 2 nights a week, which he has been doing for the past 18 months. He is well paid and although only a part-timer gets paid holidays, which can’t be bad. He has also done tele-research, phoning French companies for information, which is no problem with the French of course and helps his telephone skills. Merlin, our second son, has just spent a year at Hatfield university in Hertfordshire, but was so unhappy there that despite being awarded a bursary, decided to leave and therefore not receive the second installment. We really had no idea what it was like. Never mind, it was his decision to change and even though he will have to start at year one again, at least he’s not dreading his return. He has decided to go to Bristol as well and will be studying Built and Natural Environments. We are very fond of Bristol, as you may have realised, not too big and not too small. 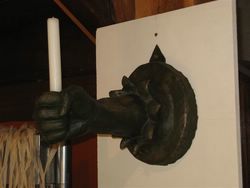 Good communications and until last year had a wonderful service from Bristol to Bergerac, which was so convenient. I have e-mailed Flybe so many times I’ve lost count to ask, why, why, why have they stopped it? They tell me it is for commercial reasons. Thank you Flybe!

I have been doing a little more sculpture this year. I find it not only very therapeutic but relaxing and good for my concentration. So when Michele Ch’i (photographer) suggested we had an exhibition, along with Birggita Kopperud, I agreed. It’ll be a bit of fun, as I’ve never done anything like that before. Although I did win first prize for a wooden sculpture of a face I entered in the Yscol y Preseli, Eisteddfod in 1972, mind you I won a prize for my Welsh cakes as well!

Steve carries on working away at one project or another. His latest being the oak frame on the front of a newish building we have, to give it some character, so it doesn’t just look like a soulless modern building. It has transformed it, so much so that a friend’s brother decided to have his retirement party in it. 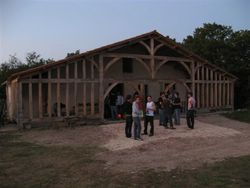 So it was a bit weird to receive an invitation to your own place, before he had discussed it with us. Never mind it went well and we were glad of a good supper after a long day of changeover.

We managed to grab a week in Corsica again this year, leaving the boys in charge of the animals. Having had a wonderful time there last year we expected another great holiday. It started well but then we had a visit from the Gendarmes warning us that if we camped sauvage again on the island we would go to the tribunal. We are very discrete and respectful, following the country code etc. But they said that there has been so much abuse by the ‘great whites’ that they now have to clamp down. So that will be our last trip to Corsica. Sardinia looks good, maybe we’ll try that next year…

Other articles by Tessa:
Mint sauce anyone?
Sheep farming
Looking back on a year in the Lot

Tessa’s property to rent – Les Places, sleeps up to 14