My life in France: why I love the Loire 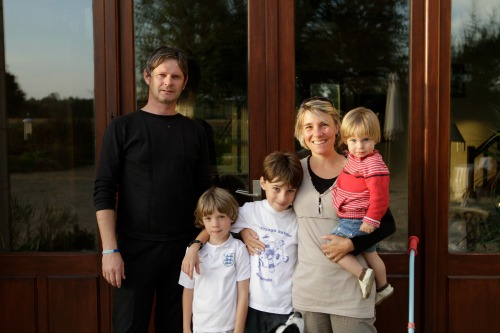 Comedian Ian Moore lives in the Loire with his half-French wife and has written a book all about his experiences, À La Mod: My So-Called Tranquil Family Life in Rural France.

Tell us about your experience of cross-Channel commuting…

I travel back to the UK almost every weekend for work. At first, I convinced myself that I was some undercover comedy SWAT team, slipping into the UK, dropping a few witty observations and stealing home – the novelty wore off pretty quickly. I try and make it a different journey every week, a Eurostar there, a Ryanair here, a mixture of Flybe and easyJet – sometimes I even drive, if we’ve run out of brown sauce and Marmite.

What do you look forward to the most at weekends?

Getting home! I really am lucky enough to live in my favourite place and even now, after eight and a half years of this ridiculous commute, it still feels like I’m going on holiday when I begin the journey home.

You’ve written a book about your life in France. Did you read other people’s work before you made the move?

I’ve deliberately avoided all books on France. I think I always knew I’d write something one day and so, in the same way that I steer clear of watching comedy, I avoided books. You can be influenced, even subconsciously, and I believe it’s best to approach something creative almost completely unaware of what’s gone before.

Have you travelled much in France?

My first holiday was to Nice and since then I’ve worked every so often along the Côte d’Azur. I travel so much that on the rare occasions I am at home, I tend to stubbornly drop anchor!

Has France proved to be a rich source of comedic inspiration?

France is a rich source of comic inspiration but not from a stereotyping point of view, though there’s always room for a bit of gentle ribbing about strikes and the length of meals. My comedy comes from the point of view of a very English fish out of water so if there’s a ‘butt’ of the joke it’s actually me.

Would you like to try stand up in French, à la Eddie Izzard or Marcus Brigstocke?

There are plans for me to do something later in the year because I want to prove to myself (and my sceptical children) that my French is good enough – and to record it and show the locals what I do for a living! In France, a ‘comédian’ is an actor and ‘stand up’ is only really just starting in the big cities, so there’s no history of what I do here.

In what ways do you think you’ve become more French?

My family would say not at all, while colleagues in England would say that I’m practically De Gaulle. For me, the biggest change is that shops are shut for lunch. I still spend half of my week in England, where it’s possible to get up at three in the morning and do your monthly shop.

What do the French make of Mod culture?

The success of Bradley Wiggins means that when the locals see me, they now have a reference point. In England, I get stared at for the way that I dress but, generally, I’m regarded as some kind of nostalgic throwback. Here I’m regarded as a cross between Buck Rogers and Doctor Who. I’m the future!

Previous Article What’s on in Burgundy
Next Article French Word of the Week: Allure