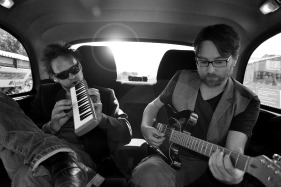 Kent Terry from Nutley in England (45) and Jake Watt from Dunbar in Scotland (31) with Tilda the Taxi from London (16) are Rip-it Encore, a band based near Pézenas that play bars, restaurants, weddings, parties and other events.

Before moving to France, Kent was a piano bar entertainer, working on cruise ships and ski resorts. Jake has been in the music field for much of his life, playing different instruments in various bands. Tilda the taxi was a London taxi until she was exported to the south of France for a quiet retirement touring with a rock, jazz, pop, blues and reggae duo (sometimes trio).

What first attracted you to life in France?
Kent: The lifestyle. I always dreamed about a life in the sunny South of France for as far back as I can remember. Because I am a lover of good wine, music, historic buildings and great landscapes, I couldn’t really see a better place to live.
Jake: Parents brought me here as a child.
Tilda: The clean air and attention.

What preparations did you make before you went out?
Kent: I got my cat vaccinated and bought a huge 1982 Mercedes van for the move, which I then sold when I arrived. I got my money back and a little more. Other than that – Nothing… Oh, spoke to a local estate agent to arrange somewhere to live.
Jake: Nothing.
Tilda: Had an MOT done and passed.

What do you do?
Kent: Webmaster, musician and father.
Jake: Musician.
Tilda: Spoils brides and grooms, make things look great in any setting.

How have you found setting up a business in France?
Kent: As long as you read the instructions, fill in all the paperwork, and I mean all of it, wait patiently and going along with all that is asked, it’s no problem at all.

Where do you live? Describe your property.
Kent: I live in a recently converted stone barn that was owned in the C18th century by a wine producer. The house is located on the edge of a village just outside Pézenas. It backs on to vineyards and we have a beautiful village square.
Jake: House not finished, but should be in sometime between June and December.
Tilda: Couldn’t be more content. I’ve been given the cellar where Kent stores all the wine.

How did you go about finding your home? Was it a long search?
Kent: We looked at 40 properties in a four month period before settling for this one. Every house we visited has something from our tick box, but this house ticked them all.
Jake: Just saw one and bought it.

Did you have to do much work on your property?
Kent: As our property was converted into a holiday house back in 2000, we had to make some changes to make it into what we needed. Including creating two extra bedrooms from what used to be platforms accessed by ladders. Moved a couple of walls, a bit of paint, and took away all the wall hanging sombreros left by the previous owners.
Jake: Don’t ask… it’s been almost a year since we bought and we’re still repairing it.
Tilda: Swept away a bit of dust and parked above a drip tray. Perfect!

Could you speak the language? How have your improved your language skills?
Kent: Well, as I lived in Sweden for 14 years from when I was 19, I had already learnt to speak, read and write a second language fluently. I picked Swedish up to a level of almost perfection within five years, and thought that the same would apply to French. Boy, was I wrong. I get by now, and can converse one to one, but as soon as a third person enters the chat, I’m out.
Jake: I’m fluent in both English and French because I’ve been here since I was four. Kent is such a pain cause he constantly asks me to translate for him. I wish he had taken courses from the first day of his arrival.

What have been the main challenges about the move? In hindsight, would you have done anything differently?
Kent: I found it quite difficult to enter the French health system as I was self employed in the UK before and after the move in 2005. In hindsight I would have learnt French sooner, or for that matter, just moved here when I was four.
Jake: As I moved here at four, everything just fell into place once I started school.

How have your benefited from the move? What do you like about the lifestyle?
Kent: This move has enabled me to be more myself and benefit from a healthier and interesting lifestyle. Living in both Sweden and the UK felt a lot more stressful, where each day seemed to roll into the next. But here in the South of France it seems almost natural to put it all off until tomorrow.
Jake: Are you saying I’m lazy?
Tilda: I haven’t been knocked by one single suitcase since I arrived.

Have you found it easy to integrate into French life?
Kent: Easier than expected. After a little investigation into my family history, I found that I did originate from around here. I can almost say that I am French.
Jake: I wish you were!

What are the differences between life in France and life in the UK?
Kent: For me the main difference is that families here seem to spend a lot of time sharing precious moments by the dinner table. I think that a lot of families and friends miss this in the UK.
Tilda. Potholes.

Do you go back to the UK regularly?
Kent: Not if I can help it.
Jake: Only when on tour in Scotland.
Tilda: You must be joking! I like the roads here.

What do you miss about the UK?
Kent: Guinness.
Jake: Ale.
Tilda: Unleaded.

Describe a typical day.
Kent: I have a three year old daughter who is to me the most precious thing around. Waking up to her calling in the morning is music to my ears, and driving her to the creche in Tilda the Taxi is a pleasure for us both. Jake usually turns up to our rehearsal room at around 10am, bringing his guitar and soft tones in his voice. We do have a drummer in our band, Ged Kingsford, who is currently back in the UK finishing some tracks on a new album with some rather more famous musicians than myself and Jake, and when he is back is not yet known. Jake and I usually rehearse around 3 – 5 hours per day. At some point we’ll try to fit in lunch, which almost always consists of cheese and a couple of glasses of a local red wine made by a neighbour.

What have been the reactions of your friends and family to your move?
Kent: “Oh you’re so lucky…” But they are the ones who are lucky as they get a free place to stay every time they take a holiday.
Jake: Same…

Is your move permanent or do you plan to return to the UK?
Kent: Permanent.
Jake: Permanent.