How we turned into junkies (brocanteurs!) 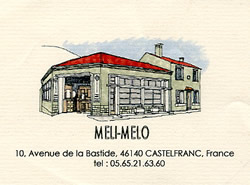 Kevin Lowe & Sandra Milne left their home in Leicester in 2001 and set off in search of adventure and a new life in France, with only a vague idea of just where in this vast country they actually wanted to live. They stuck their furniture in storage packed a few essentials into the car – along with their two young children, four year old Barney and fourteen month old Nelly, not forgetting their twelve year-old dog – and set sail for the sunny south.

After six months of gruelling house hunting and several failed attempts to buy various properties, they came across an old service station/garage with a house, in the small village of Castelfranc in the Lot valley. 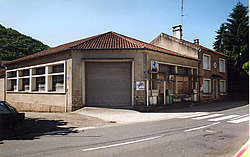 “I’ve always wanted a shop selling reclaimed & second hand goods and this place was just perfect for that!” Kevin exclaimed enthusiastically. “It’s situated on the main road between Villeneuve and Cahors so there’s plenty of passing trade, and there’s also an essential area for parking. I knew straight away that it would make a great brocante. I don’t think Sandra was over enamoured with the place when we first viewed it, she wanted to live in a French farmhouse, keep chickens and have a donkey and this place was certainly a far cry from that. All the same, her mind changed pretty quickly when she saw inside the house. Being an admirer of all things “kitsch” she fell immediately in love with the fifties Formica cupboards in the kitchen and that was that. A week later we moved in!”

Fortunately they managed to complete the purchase without any of the previous hassle, and with permission granted to open a “brocante”, Kevin and Sandra set to work on transforming the garage into a viable retail space.

“It took us eighteen months to actually get the business up and running.” Kevin smiled ruefully “It’s been really hard work as Sandra and I have done the whole lot ourselves, the cleaning, the painting, the electrics and even rebuilding walls. The worst job was actually cleaning and painting the floor of the garage, that job alone took us over six weeks as there was fifty years worth of oil, dirt and grease engrained into the two hundred and fifty square metres of cement. What with all the hard work and having two young children to look after as well, this was a rather stressful time for us and there were times when we really felt like jacking it all in and going back to the grey skies. 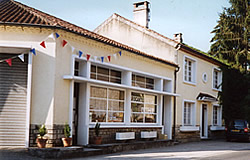 Even when we’d finished all that work we still had to stock the shop, but by this time our financial situation was at a critical level – to put it more baldly, we’d run out of money. I took a job at a local wine chateau for several months, whilst Sandra went out searching for stock and the children did the socialising at the local school. We decided that we had to set a date for the opening of the shop – if not, we might never get our act together – so we agreed on the 12th July, two days before Bastille Day. I handed in my notice at the chateau and left a week before our set date for the opening. That week was really hectic. The children had started their summer holidays, so not only did we have to complete all the final preparations for the shop, but we also had to entertain the children. We were working until the early hours every day, falling into bed exhausted, only to be woken at six by the kids. It was the hot summer too; temperatures soared into the forties, which is not conducive to manual labour. It was a mad week and we were completely shattered!”

Despite all the pressure, Kevin & Sandra opened their brocante, which they have called Meli-Melo (meaning “Mish-Mash”) at eleven o’ clock in the morning of the 12th July 2003. Celebratory aperitifs were passed round for all the villagers and, much to their relief, there was no lack of customers. 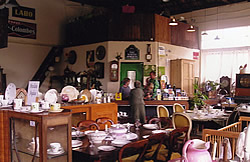 Since the enormously successful opening day, Kevin and Sandra have never looked back. The business has expanded and gone from strength to strength. Not only have they built up a regular local clientele, an eclectic mix of French, English and Dutch, but also there’s the added benefit of the many tourists who visit the area during the holiday periods. A recent article about the shop in the departmental magazine Dire Lot has also provided a noticeable increase in customers from other areas of the department, who now travel on a regular basis, to visit the shop.

The Secret of Success

“We had three criteria before we opened up the shop.” Explains Sandra, “the first was simply that all goods going into the shop for resale must be clean and well presented. The second that the shop must have regular opening hours and the third that all the prices must be reasonable. We’d visited hundreds of brocantes in the area before we opened this place and we felt that these three things would distinguish us from the others. We’re not an antique shop and we don’t pretend to be. We often stock some very nice pieces, but all in all we like to feel that there is something for everybody in our shop. We sell everything from old ploughs, beds and wardrobes to plates, plant pots and greetings cards. We have a high turnover of stock because prices are kept to the minimum, it keeps the shop interesting and that ‘s why we get people coming back on a regular basis. Of course it is hard work, but we reap the benefits. Nothing gives me more pleasure than when a customer tells me how tastefully the shop is laid out -even if they don’t buy anything!”

Have Kevin and Sandra any regrets about starting a new life here in France?
“Absolument pas! we love it here and so do the children. We have no regrets at all,” says Kevin. “We had a lovely house in Leicester but, unfortunately in the wrong area. City life is not for us, we wanted to get right away and have the chance to create a better life for us and even more importantly for our children. We feel we’ve achieved that here.”

Any more plans in the pipeline? There certainly are. Kevin and Sandra have always fancied incorporating a coffee shop into their brocante, but until recently, there was a little hotel in the village, offering just that service. Now the proprietor has decided to retire and plans are already afoot. You may soon be able to enjoy un petit café et gateau whilst you dither enjoyably over your selection of bric-a brac.

And Billy the dog? He’s sixteen now and still going strong. Sandra puts it down to the clean air, the carefree life and the French diet.