We knew Brits would love our sausages, but the French do too! 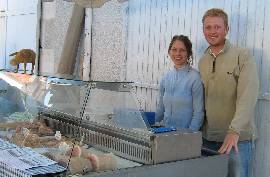 At the start of the new millenium Oliver Jenner and his girlfriend Amy Jones were both at Newport University in Wales. Oliver was studying photography and Amy media studies. Fast forward to the present, however, and you won’t find either of them in the world of media and PR. Instead, the couple can be found busily making sausages and curing bacon in their own butchery in rural France.

Quite a career change. ‘Yes, I know,’ laughs Oliver, 24. ‘When I was at uni I needed money to live off so I got a part-time job in a butcher, and I found I loved it. It was really creative, learning how to do the different cuts of meat and preparing orders for people. So I decided that’s what I wanted to do.’

At the same time 25-year-old Amy – the couple met after rooming in opposite rooms at university – was coming to the conclusion that she didn’t want to live in the UK. ‘It was too expensive and I didn’t want to be in a city,’ she explains.

Both of them knew France having regularly visited Oliver’s parents who lived in the Vienne, so they decided to make a new life across the Channel. ‘We really fell in love with the area because of the countryside and the way of life here,’ says Oliver. ‘And I wanted to keep doing butchery, and we decided that the best place to start it was in France because of the large British community.’

The couple researched the idea of producing and selling their thick, juicy sausages and other pork products for a year before deciding to definitely go ahead. They eventually moved to France in 2004 and although they bought a house for 30,000€ it was little more than four walls so they moved in with Oliver’s parents.

The first thing they did was register as job-seekers with the job-seeker’s agency, ANPE, which provided them with one year’s worth of free French lessons. Then, with the help of their local Chambre des Metiers, they started to apply for the various grants and bursaries that were available for young people wanting to start up their own business. ‘Every time we applied I had to make a presentation – in French!’ says Oliver. ‘It was incredibly nerve-wracking!’

They also attended a local business course, in English, at Limoges which helped the couple work out their tax and pension details. They decided on a ‘micro-enterprise’ which means they can do the book-keeping themselves and not have to pay an accountant, although this means they cannot have a turnover of more than 76,000€ a year. ‘But it is easier to change up than down,’ says Oliver. Adds Amy: ‘And we prefer to expand slowly so we’re not out of pocket or having huge debts.’

While the various grants and bursaries helped pay for their equipment, from refrigerators to mincers, the couple used their savings to convert an old building on Oliver’s parents land into a self-contained, three room butchery, where they cut the meat and make the sausages.

Ten months after they arrived, having passed the health inspection test with flying colours, Oliver and Amy started their business, Le Cochon d’Argent. Their first market day was fete du pain at Jouhet in the Vienne, and they went loaded with 30kg of sausages in flavours from Cumberland, Pork and Cider Pork and Leek and Lincolnshire with sage and cracked black pepper. ‘And we sold out by 11.30am,’ says Oliver.

Since then the business has grown through word-of-mouth, and today Oliver and Amy’s range of sausages come in 30 different types, fincluding pork and prune and whisky and walnut. While the couple expected their clientele to be mainly British, the French are also falling for their product. ‘Now 70% of our customers are French which is fantastic because it is really nice to sell to the locals,’ says Oliver. ‘They think we’re a bit bizarre in our taste but they still love it and keep coming back to try something new! They like the less spicy sausages although they do love the ones with lots of garlic.’

At the moment the couple do not breed their own pigs although they do plan to in the future, including rare breeds. Instead they buy French white pigs from local farmers which are slaughtered at the local abattoir before being delivered to the butchery. Here, the meat is turned into sausages, as well as home-cured bacon and meat cuts including pork joints with a thick slice of fat for crackling.

Amy helps in the butchery, as well as running the business side of things. ‘It’s been a complete change for me and I thought I might struggle, but I’ve been fine,’ she says, although she admits she was homesick for the first six months. ‘I missed my family and friends and I was worried that because I couldn’t speak French I wouldn’t meet anyone my age.’

Not just sausages but bacon, ham and pork

The couple are extremely busy. They make the sausages the day before they go to market to keep them fresh, and with three markets a week, they are extremely busy. At Christmas, as well as gammons and honey glazed hams, they also add turkeys to their product list, which means trussing up to 50 birds. For the first couple of years they spent their one day off, Sunday, doing up their house which they finally moved into in the summer this year.

Still, they wouldn’t have it any other way. ‘We love it here – the area, the lifestyle and the people who are so friendly,’ says Amy.

She had no need to worry about making friends. They have plenty, the majority French. ‘When we arrived we made sure we went to our local bar and everyone made us feel very welcome, especially when we started trying to speak the language,’ says Oliver.

Next month they get married and many of their new French friends are flying to Wales to be at the wedding. ‘It as easier for us to go to Wales than get all the family to come to France!’ says Amy. ‘But France is where we want to live. It’s our home now.’