We work harder than ever, but still love France 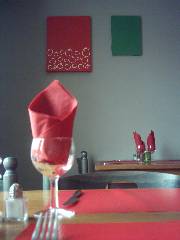 Linette and Stuart Smith moved to Brittany having holidayed in France for many years. They bought a restaurant, La Petite Peche, with the help of Stuart’s parents who had been in the restaurant trade for 35 years.

La Petite Pêche was bought from a Scottish couple who had run it for about 18 months. However, when the Stuarts took over, they discovered that business was sporadic at best. “We used to sit in front of the wood burner in the restaurant lounge, jumping up every time a car went past, hoping that someone would actually be wanting to eat or have a beer” says Linette.

Despite a slow start, the couple persevered and the restaurant now has an ever growing customer base. “About 60% of our guests are French; the remainder are the English that live over here or visit the area for holidays” says Stuart. “It was important that we weren’t seen as another English run restaurant, serving English food to English clientele. That’s not to say we don’t appreciate our English customers – we’ve made some really good friends since we’ve been here and I think it’s nice to sit and have a chat in your native tongue and share some of the ups and downs with fellow expats” he added.

Life here is much more basic but you feel like you are actually living. We work much longer hours now but we communicate with each other, have time to spend with the children. And though we only have one day off a week we really make the most of it – go surfing, go out mushroom hunting, have friends over. In short we live life rather than life living us.

How was your French when you moved over?

We had holiday French and could get by in bars, restaurants and supermarkets but we were a long way away from being able to hold a conversation, even at a very basic level, when we arrived. That said, our main goal was to integrate into the community and learning French was a priority. We didn’t buy tapes or books, we just threw ourselves into it and muddled through. One year on, we can have a bit of a laugh and joke with our French friends.

What about your two children?

They go to a private bilingual school, French and Breton. Billy’s teachers say he has a real aptitude for languages. Harry struggled a little more but it’s all falling into place and they both came home from school last week and had got top marks in class.

Schools are a little different to England. When we got here, they were both in the equivalent of junior school and apart from the language, found things like maths really easy. The French don’t really push children until they attend college. Billy (11) started at college this year and loves it. Harry, (8) does maths with kids a couple of years older and his teachers say he should go to college a year earlier!

The fact that they weren’t pushed in the first year has actually given them both the opportunity to get a real understanding of the language.

How have you integrated into the French community?

The culture is very different but the local people are brilliant. We had been here only a couple of weeks and one of the local farmers, Marcel, and his wife, Marie-Louise, came and introduced themselves. We’re now firm friends and in the summer, Marcel would pick up the kids and take them off on his tractor for hours at a time. You just wouldn’t dream of allowing that in England. You seem to make friends here much more quickly than in England.

Take Roget and Andrea – they popped in for a drink in the summer because a couple of their friends were having a meal. A few telephone calls later we had a table of 12 eating and drinking and insisting that we must go to the pardon that night with them. The pardons are a fantastic way to meet normal French people in a relaxed, sometimes too relaxed environment. We were pretty much the only English there but sat, danced, drank and fell down with our new found friends.

The local business community is also great and people are happy to see you doing well. I think if you give a little bit in the way of effort to chat with people, learn their customs and traditions, then they’ll do all they can to help you out in whatever way they can.

Linette celebrated her 35th birthday recently and we put on a buffet and invited everyone we knew. It was a real event with French, English and Breton all getting on really well. We have been asked by a few English friends who came along to put an event like that on each month so that the whole community can get together.

What about the business?

It can be tough. When we got here we had all kinds of ‘Excel’ documents set up on the computer to monitor best-sellers, good days, bad days etc. After a few months, we stopped bothering – there is simply no pattern at all. One Tuesday can be full at lunch and dinner; the week after it can be dead.

We also made lots of mistakes in our first year, which we knew we would! We were doing a 10€ menu at lunch and a much more sophisticated menu at 18€ evenings and weekends. Now we have simplified the menu, though it changes every day, and now includes coffee, wine and three courses for 11€ every week day, except Wednesday when we’re closed.

Fridays were difficult too. In England it’s the start of the weekend but here Saturday is a normal working day so people don’t go out much on Friday night. Since we’ve been putting on theme nights (Indian, Italian etc) however we’ve seen a definite increase in Friday night business and the French just love the idea of curry.

The amount of paperwork is gargantuan and obviously it’s all written in French – we got ourselves into a bit of a pickle at the beginning but with the help of our accountant, we’re now on top of it.

If we could offer any advice, then that would be to do your homework on what you need to pay out each month by way of cotisations, then don’t forget all the taxes that must be paid at the end of the year and income tax later the next year.

Also, be sure about what you are buying. It has to be said that if something appears to be too good to be true, then it usually is! We’ve suffered floods in the cellar and have since discovered it was knee deep last winter too. We should have guessed when we saw the marsh plants across the road!

On the point of food, we came here with specific ideas – no chips, different menus every day, no English food etc. Down the line, we’re learning to be less precious about it all and now offer a snack menu – steak haché and chips, spaghetti of the day, omelette and chips, quiche and chips.

Whether a guest is spending 6€ or 26€ we try to ensure they feel as though they are getting as good a service as we can offer. We’re also looking at putting on an traditional English Sunday lunch, something we’ve so far resisted doing – but I’m sure it’s worth giving a go and will prove popular with both French and English friends.

Do you see yourselves going back?

We do miss family and friends in England, but we do try and stay in touch via the internet and phone calls. However, I don’t think we would think of spending our summer holidays in England.

If the business was to prove unsuccessful, then we would have to weigh up our options, but we’re committed to life here, so I’m sure we would stay at all costs.

I picked the children up from school today and they both said “I love living in France!” They have chickens here and plenty of space to play.

Sure, there are sacrifices we’ve all had to make. Christmas presents are not so extravagant, life is all together much less materialistic and simple – long may it last!

It’s not easy, there are real problems and it’s not all A Year in Provence. That said, the pay-offs are huge, particularly from the perspective of a happy family life.

Previous Article Dealing with tomato and potato blight; and white worm
Next Article Room with a View