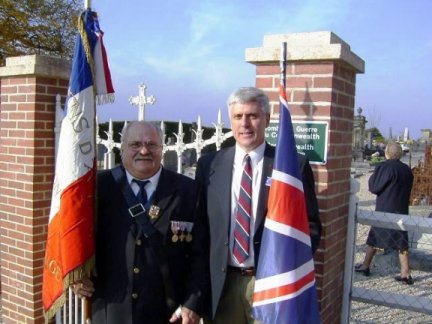 How one British couple got involved

As I write this, there is a definite nip of autumn in the air, and it is time to gather in the cider apples. The tractors are trundling up and down the lanes between their orchards and the cider makers here in the delightful Pays d’Auge region of Calvados. It is difficult to imagine the bitter fighting that took place here over 60 years ago, and the utter devastation of the towns and villages.Autumn, for us, also heralds our participation in the Remembrance Service held in our nearby town of Crèvecoeur. This is our fifth year involved in this service. Our French neighbours invited us to join them the first year, and we readily agreed, as my family have a long tradition of Royal British Legion involvement back in UK over 3 generations. My husband Russ spent 26 years in the RAF, so we are always more than ready to give thanks for the freedom we enjoy today. Nowhere is one reminded more forcibly of the heroism of those who fought than here in Normandy. From the vast cemeteries in Bayeux, with row upon row of pristine white crosses, and dates of birth showing just how young these boys were who faced such horrors.. But for me, equally as sad are those single War Graves to be found in churchyards throughout the region – soldiers buried quite alone, such as the 18 year old sergeant lying in our village churchyard. How did he get separated from his regiment? Although alone, he is not forgotten, and each year, the townsfolk lay a wreath of bright flowers and offer a prayer of thanks.

It was at this service that the Maire noticed our poppies, and especially my husband’s RAF tie and came over to chat to us. The police chief handed over the Union Jack for my husband to carry from the church to the sergeant’s war grave. The following year, we came ready with a poppy wreath to lay at the monument aux morts. The French people do not wear poppies, rather on the day they buy a ‘bleuet’, a sticker of a cornflower as their symbol of remembrance. After the church service and the silence, we all troop round to the Salle des Fetes for a vin d’honneur and a meal. That first year, I thought this would mean a quick spot of lunch – How wrong I was! 5 hours later, we were still eating and drinking and learning lots of French songs of the era – their equivalent to Roll out the Barrel, I suppose. We are much more prepared these days, and I will make sure we have a very light breakfast so that we can do justice to the wonderful feast that is always laid on!

Russ doesn’t carry the Union Jack any more – once again it is the police chief’s job to carry it safely to the young sergeant’s grave. 18 months ago, Russ was asked to carry the French flag for the ‘anciens combattants’ as the usual standard bearer, Gérard, wasn’t feeling too well . Russ thought this was a one-off and agreed to help out. What he had actually agreed to was take on the job permanently!! After a ceremony and the obligatory vin d’honneur when he accepted the job (duly reported in the local newspapers as a noteworthy act of integration by un Anglais), his first engagement came the following weekend, at the funeral of an ex-soldier, held at a very small country church. As the portes-drapeaux (flag bearers) filed slowly up the aisle, Russ’ inexperience in flag carrying, plus the need to negotiate low-slung incense burners resulted in the inevitable… Flagpole hit burner, which swung alarmingly overhead. All mourners’ eyes lifted upwards to see if the burner would fall….. the only sound apart from the collective intake of breath was a softly exclaimed ’Ah, merde!’ from a more experienced porte-drapeau…

We have met many, many people and made some firm friends as a result of this little civic duty. We know this small contribution is appreciated, as Russ was awarded a medal for services to the community last year.