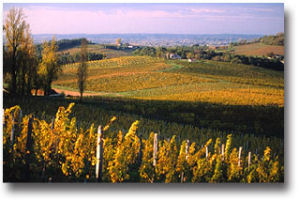 A guide to the Bergerac appellations

You may know that the countryside round Bergerac produces wine, but did you know that there are thirteen appellations contrôlées in the region? Here’s a brief guide to them. (In a number of the photos below I’ve lined up a batch of bottles with the different labels – the text under the photos refers to the bottle in the centre.)

Background to the Appellation system

The appellation contrôlée system, which now extends throughout the member states of the European common market, denotes a guarantee of both origin and quality. A wine bearing one of the thirteen appellations applicable to the Bergerac region will be guaranteed as coming from the region and complying with strict conditions, such as the amount of grapes harvested per hectare and the variety used.

Starting with the reds: the generic appellation, available to any wine-producer in the 12,000 hectares of defined wine-growing area, is Bergerac rouge. The grower must use at least two of the four prescribed grape varieties: merlot, cabernet sauvignon, cabernet franc and malbec. Merlot is the dominant variety, accounting for 60% of the Bergerac red wines. Malbec is the least used. It is the variety most used in the wines of Cahors, in the neighbouring Lot region.

Similarly available throughout the Bergerac area is the appellation of Côtes de Bergerac. However, this denotes a higher quality than the simple Bergerac rouge, and is available subject to strict conditions. It is described as a vin de gastronomie. 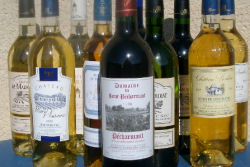 The two remaining appellations for reds are limited to precise geographic regions. First, Pécharmant, which covers an area of 400 hectares on the edge and to the northeast of Bergerac, comprising some 40 producers plus a co-operative. The soil in this area contains traces of iron, which gives the wine a distinctive taste.

Finally there is Montravel rouge, between Vélines and the Dordogne river, to the west of Bergerac, and close to the border with the neighbouring department of Gironde. The Montravel appellation is the most recent of the group, having only been placed on the market for a couple of years.

Then we have Bergerac rosé, usually quite dry and extremely drinkable in warm weather. 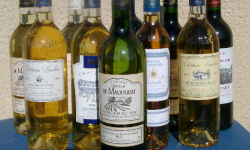 As in the case of Bergerac rouge, the appellation of Bergerac sec is available for white wines throughout the area. Montravel sec, on the other hand, is restricted to white wines produced in the Montravel region. The soil here has flint deposits which are said to add a dimension to the usual aromas of citrus, peach and apricot in the Bergerac white wines.

The term “vin blanc moelleux” is used to describe a sweeter white wine that is made from grapes harvested later than usual, but not so late as to be subject to the “noble rot” applicable to the true dessert wines – known as “vins liquoreux”. As regards the vins blancs moelleux, there is a generic appellation of Côtes de Bergerac moelleux and then two specific appellationsi, dependent on strict location: Rosette,on the hillsides to the north of Bergerac, and Côtes de Montravel and Haut Montravel, respectively to the north and west, and the east, of Vélines. 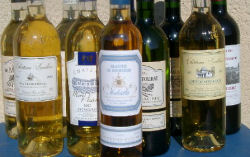 Finally, the vins liquoreux, and the two remaining appellations. The grandest of all is Monbazillac, grown on the north-facing slopes of the hills that rise out of the Dordogne valley to the south of Bergerac. The northerly aspect enables the grapes to benefit from the October mists, bringing the precious humidity that favours the development of botrytis, or “noble rot”. The strict requirements for the grapes means that grape yields will be about one third of the amount expected for an ordinary white.

Monbazillac is said to account for the largest quantity of dessert wine in the world, and has a history going back to the Middle Ages. To the west of the Monbazillac area is the younger and smaller appellation of Saussignac. This appellation used to be used for both vins moelleux and vins liquoreux, but is now confined to the latter. 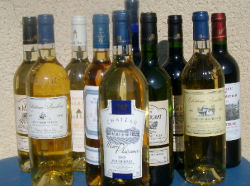 The best way to understand the different appellations is simply to taste the different wines from the different areas and find what suits your palate. What will undoubtedly come as a surprise, when you get into the subject, is the extraordinary variety of wines that results from the different soils, locations and combinations of grapes – let alone the various techniques of wine-growers to produce what people like. The growers of bulk wines in the Bergerac region are suffering financially at the moment, but for the better quality wines the wind currently seems set fair. We’re hoping that our house wines from Château Belingard will be safe for a while yet.

For further information about Bergerac wines, visit the website of Bergerac’s Maison des Vins or the presentation by Bergerac’s tourist office .