Tales From The Bicycle Gourmet 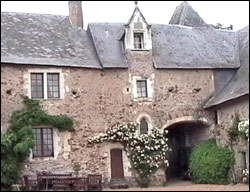 His Chenin Blancs are consistently rated ‘exceptional’ by all the critics, but Nicholas Joly, often labelled The Pope of biodynamics by one wine magazine takes no credit for his renowned wines.

“They are not my wines,” he said. “I did not do them. My part is just for balancing and tuning things up.”

When I first read about ‘The Pope’ what made him immediately my cinematic cup o’ tea, were two things: One – He looked the part. Two – as a former merchant banker in England, he had to speak English.

So there was nothing to do but tell him why we were destined to meet, that I was flying blind, and there was no guarantee of anything for anyone.

“Sounds wonderful,” he faxed back. “Come and see me.”

Easy for him to say. I was thirteen cycling days away. Arriving in a nearby village on the twelfth night, I phoned to confirm.

Nicholas was in the hospital with gallstones. Could I call back tomorrow? “Yes, M’am” was the only possible reply. N’est ce pas?

I visualized the next issue of wine snob weekly: “Pope felled by gallstones” Oh well. What’s a poor boy ta do? I went for the three Bs: bistro, bottle and bed.

Next day, I waited until noon to call. Miracle of miracles The Pope had returned. And was awaiting me. Knowing the Jolys lived in a converted monastery, I wasn’t expecting a hilltop chateau, ringed by a swan filled lake.

But there was, to me, a junior chateau, at the top of the vineyard. Nicholas’ parents home, and his office. 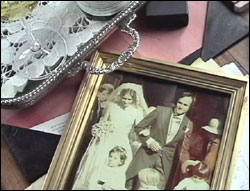 The monastery, at the bottom of the vineyard, was a u-shaped building with ten or so plain, but cozy guest rooms on one side, and the Jolys’ living quarters, and a stable, on the other.

Decent sized living room, with fireplace. Smallish kitchen. Bathroom upstairs. And a large study, with a very old grand piano. Warm. Inviting. Brimming with character. Like the people who lived there.

Mrs Joly was as warm and welcoming in person. Though I was right about the English accent. She was German! A former art historian at Sotheby’s. Luckily I had not tried to impress her with my only German phrase: “Where is the bicycle repair shop?”

Halfway through a very welcome home made herbal tea, the Pope strode briskly in. Beaming a gigantic smile.

“So you made it. Welcome, welcome,” he said. His handshake was vigorous and short. “Please, please.” He motioned me to sit. I was in film maker heaven.

Ever prepared, I responded with a definite: “Uhh how about, uh the vineyard?”

“Fine,” Nicholas smiled as he rose and motioned me to follow. “Let’s get the dogs.”

By this time, dear reader, I had learned that one of the most important commandments of French male-dom is Thou shalt have at least one dog. Nicholas had two. Golden Labs. Friendly, obedient. My kinda pooches.

As we drove to the grapes, Nicholas filled in the blanks. His father was a former village Mayor. His mother, the family winemaker.

Nicholas’ non-Pope life began in London, as a merchant banker. But, eventually the call of the land proved stronger than the call of merchant banking, and Nicholas returned to the Loire with the future Mrs Joly, to take over the vineyard.

What he found was that decades of pesticide-based farming had resulted in an increase, not a decrease, in plant disease. Nicholas had a sick vineyard on his hands.

But he had always been intrigued by the theories of the Austrian philosopher, Rudolph Steiner, the originator of the concept of biodynamics. Best known as the founder of Waldorf Schools.

After investigating Steiner further, Nicholas decided to put his theories into practice.

Biodynamics, in a sentence, is the application of dilute solutions of organically derived fertilizer at precise times, under precise conditions, to aid plant health, and thus, growth.

In essence, biodynamics is homeopathy for the soil. One of the main principles of biodynamics is acting in concert with the phases of the moon. Something farmers have done for centuries.

“Many people today, speak of biodynamics as as if were some kind of new age voodoo,” Nicholas said.

“This is complete nonsense. We are simply re-discovering and applying the old wisdom. Wisdom that has for centuries produced healthy and abundant chemical free food.

“Of course, this ‘free farming’ is totally against the interest of the chemical companies who influence government regulations.

“So there is tremendous opposition. And now that their pesticide profits have fallen, they are promoting this genetic nonsense.

After a day of virtually non-stop cinematic adventure, enough candles for a mini rock concert greeted me in the dining room. 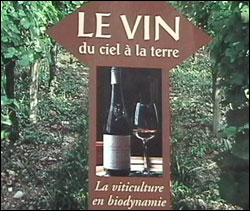 Shadows danced across the vegetarian buffet on the solid oak table. Now was the time for pleasurable, sensory thoughts. Like, “where’s the freakin’ wine?”

Not a glass in sight. Let alone a bottle. There were, however, pint sized glass bottles, filled with a murky, brown liquid. Their home made apple juice.

Mrs Joly explained: “We do so much tasting, that in our personal lives, we prefer the juice.” She smiled. I smiled back. I hope, not too weakly.

Shortly after I had arrived, Mrs Joly asked me where I slept when I couldn’t find the country inn o’my dreams?

“Try to find a farmer with some spare hay,” was my response.

As the meal wound down, Mrs Joly clocked me with a mischievous smile. “Well. I’m afraid there is some bad news. We have no hay. However, I’ve made up a room for you that I hope will be comfortable.”

The room with no hay was at the end of a long rectangular hall of ten or so others, in the opposite “U” of the monastery. There were two single beds, a wash basin, and a mirror.

Three windows gave it a sense of greater space. One with a view to the courtyard. The middle one, showcasing the vineyard. And the third, the woods beyond.

No sleeping pill was required. No review of the day’s events mattered. I done good. And I was done! Quickly, happily, I melted into the collective biodynamic unconscious.

My alarm clock was the aroma of freshly baked bread. The room, awash with light, seemed larger. More of a suite. I felt very much the country squire. Lazily contemplating if, and when, I should rise.

Yesterday’s events seemed far distant. Part of another life. Another time. Finally dragging my deliciously lazy butt to the kitchen, I found the bread. But no one else.

I dined alone, as country squires often do. Fresh bread. Homemade apricot jam. Strong coffee. After brekkie, ambling the alley of cypress tress that connect the monastery to the main house, I was enveloped by it’s unique calm and tranquillity. Surely what attracted the Monks who began this story centuries ago.

It wasn’t until my bike was almost loaded that Nicholas appeared. As suddenly as the first time.

He beamed. “You slept well? Comme le mort (like the dead)? And where do you go now?”

“To the next farm with hay,” I replied.

“Well good travels and remember you’re welcome anytime you pass. I can’t guarantee that I’ll be here, of course, but we all know you now.”

Those were the words that lingered as I pedalled down the wooded road. ‘We all know you now,’ what better invitation could there be? 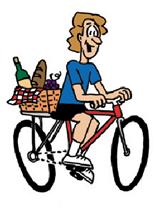