A traditional bakery in France

It was a huge wrench, and actually nauseating, getting up at 4:30am. By ten to six, I was 25km down the road, walking into the bakery, and trying to make words come out of my mouth, such as “Hi, I’m Gemma, the journalist. I believe you are expecting me.” Instead, with wild eyes and a dizzy head, all I could manage was “Hello. I am writer.”

Nevermind, Nicolas Delmas was clearly amused at my ‘earliness shock’, but he was very welcoming and friendly. The 26 year old set up the successful bakery, ‘Le Pain de Peyrignac’, with his girlfriend, Sabrina Manière, 24, one year ago. He grew up in his parent’s bakery, over the road. Far from being in competition with each other, the two bakeries work together to supply the huge demand for their extra special bread. The bread is special because it contains the magic ingredients, flour, water, yeast and salt, which is highly unusual and increasingly sought-after nowadays. Nicolas’ customers are no longer happy to ingest the raising agents, emulsifiers, flavour enhancers and preservatives that are on offer in most other bakeries and supermarkets. The lack of chemical aid means that Nicolas has to start work at half-past midnight, so that his dough has time to rise for four or five hours, rather than the more common one or two hours needed with chemical raising agents. This shift ends at 9 or 10 in the morning. Which brings me on to my first question…

How do you cope with your working hours?

“People always say “surely it isn’t worth it”, but it’s a routine. I actually like working through night, because it’s calm and quiet.”


I wasn’t convinced, although if I did have to work nights, a warm bakery’s a pretty good place to be. Apart from the nice temperature, the smells are obviously wonderful, the dirt consists of flour, there were other workers around, the light is not too bright, and the atmosphere, like the ingredients, is quite magical. Outside, it was dark, cold and raining, and walking into the calm activity of the glowing bakery was like entering Santa’s grotto, with elves working away in the background.

Does Sabrina work the same hours as you?

“No, we need her to run the shop and accounting, during the day. It’s no good getting staff to run things by themselves, because they will become unmotivated, and the standards will slip. She was asleep when I left for work this morning.”

What are your future plans? Is this what you want to do for the rest of your life?


“Yes. It’s not a bad way to earn a living, and we are lucky having my parents over the road, because we often look after each other’s bakery, so that we can get away on holiday whenever we want to. I hope to expand this operation, because demand is far higher than we can supply, but we’ve only really just started out, so expansion will come a little later.”

How did you afford to set up your bakery?

“A big bank loan! We can’t make any mistakes for 10 years or so, when the money should be paid back.”

Tell me about the ovens. 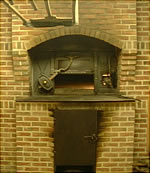 “They cost about €30,000 each, and we have two of them. The same man built my parent’s two, and he’s an expert on constructing wood-fired ovens – he also builds pizza ovens.
The wood goes underneath, in a giant firebox, but we also put hot coals into the oven with the bread and cakes. This adds a delicious flavour, as well as cooking more effectively.”

Which woods do you use?

Poplar and beech. Beech has a high calorific value, so it burns for longer, at a higher temperature.

Do you have problems getting flour of a consistent quality? 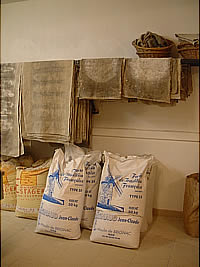 “Yes. The quality changes, and the flour is also effected by its age. Sometimes it’s too old, and sometimes too young. We just have to counter the problems by varying the quantities of the ingredients.”

How many staff do you have?

“In this bakery, we have two apprentices, then there is our family, including my brother-in-law, and my parents have a few staff, too.”

I met Laure, who was the apprentice on duty that morning. She already makes lots of the pastries, but humbly insists that she doesn’t know how to bake; she is learning her trade from Nicolas. The 16 year old is the only girl in her 15-strong college bakery class, but she’s soaring in front of the boys, because she loves her work so much. Nicolas gave me an enormous croissant and a loaf-size ‘pain aux raisins’ (danish pastry), which Laure had made, and they were both absolutely delicious. The work of an expert. I can’t understand how the French can learn to make croissants so beautifully, but Nicholas says that it’s not that hard to learn; you just have to make them frequently, or the rhythm goes, and the pastries fail. 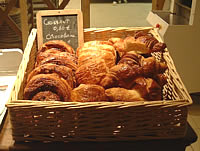 Apart for the two bakeries, I knew that Nicolas sold their bread at lots of markets and ‘depot-pains’ in the area, and wondered which ones.

“We counted 18 ‘depot-pains’, and we sell at these and markets from Brive to the west coast.”

That’s a massive area! How do you get the bread to the customers?

“We have a van, and my brother-in-law, Phillipe, also does the markets; Périgueux, Libourne… But we have to turn customers down now, because we can’t make or transport any more bread than we’re doing now.”

I said good-bye, laden with warm loaves and buttery pastries, and headed back out into the rain, mud and darkness.

I am often in awe of the sacrifices individuals I meet are prepared to make, in order to sell high quality food or drink. All of them explain that it is a labour of love. I always think something like, “how can you love your product enough to start at 5am, outside, in winter!?”. Nicolas starts earlier than any of them, but, after spending time in his beautiful, warm, sweet-scented workplace, I can actually understand the commitment he has to his beloved bakery. 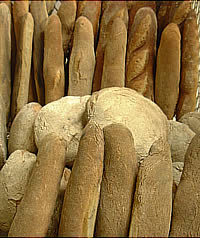 If you are in the Dordogne, Corèze, or Gironde departments, you can find out where the nearest ‘depot-pain’ is for ‘Le Pain de Peyrignac’, by calling the bakery, on 05 53 50 63 39.