Everything You Ever Wanted to Know about French and English Wills, Including Brexit 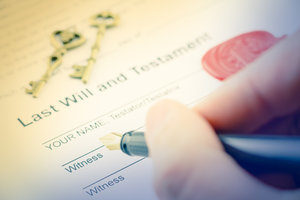 When I die, how can I ensure my French property goes to the person/people I want it to go to?

For many, the greatest worry about death is what will happen to their family – and a significant part of this worry concerns who will receive their assets.

There are a number of French legal asset structures that can be set up to protect your loved ones
(including SCIs and matrimonial property regimes) but this article will focus on the one with which UK nationals are most familiar, wills.

It may sound obvious, but the most straightforward way of confirming your foreign assets end up in
the hands of your chosen beneficiaries is to ensure you have a properly drafted will which is (critically) the product of professional cross-border advice – and not advice provided by a well-meaning friend.

Be under no illusions, wills are complex documents and on a daily basis we see the heartache that is
caused by badly drafted wills that misunderstand, misinterpret and misapply intricate cross-border
succession law.

I thought French law dictated who inherited my property?

In France, there are laws which govern how you must leave your property when you die. These are
colloquially known as ‘forced heirship’. For example, under French law you cannot simply leave all
your assets (including the family home) to your spouse when you die, a set proportion must be inherited by your children.

However, since 2015 EU Regulation 650/2012, also known as ‘Brussels IV’ allows forced heirship
rules to be bypassed in certain circumstances.

In essence (and only after your cross-border specialist has made enquiries to ensure it is appropriate to do so) you can now elect for the laws of your nationality to apply to how you leave your assets. This means if you are British you simply need to have a will in which you formally ‘elect’ the laws of the UK region with which you are most closely connected – be it England and Wales, Scotland or Northern Ireland.

Under the law of England and Wales, for example you are free to leave your property to whomever
you wish; be that your spouse, other family members, friends or charities.

What about French succession tax?

Although you can choose the law of your nationality to govern how you leave your assets you are not
able to opt out of French succession tax, and be warned – there can be substantial indirect tax
consequences of making an election – so make sure you take qualified cross-border advice before
making an election.

Do I need a separate will for France and for England?

The answer to this question is ‘possibly’. It depends on your individual circumstances including your
family make-up, the nature, value and location of your assets, how the assets are owned and who
you would like to receive them.

Although for some clients the correct course of action is to draft one will to cover your worldwide
assets, for most clients, separate wills to cover assets in each jurisdiction in which the assets are
situated are more appropriate.

Moreover, since the new EU Regulation was introduced there are compelling reasons for having both
of your wills (English and French) drafted by a UK cross border specialist who is able to advise you on the succession (who gets what) and the taxation consequences of your entire UK and overseas estate.

Please note that it is now seldom a good idea to have both wills drafted by different lawyers.

Why do we think two wills drafted by the same UK lawyer is the best course of action? Well two wills
(drafted by the same cross-border specialist) means the probate process can be quickened after you
have died, saving your family time and money; it means continuity of planning and advice and above
all, if you are making an election for British succession law (English & Welsh, Scots or Northern Irish as appropriate) to apply who is best qualified to provide the advice; a British succession lawyer or a foreign lawyer?

Moreover, if both wills are drafted by a British lawyer, not only are you sure to be covered by a UK
lawyer’s regulatory regime and compulsory insurance, but also it will be in a language you understand
and you can be sure there will not be compatibility and inadvertent revocation issues as between the
English and French will.

That said you should be guided by your cross-border specialist, because there are circumstances
where a single will covering your worldwide assets is best and where a ‘foreign’ will drafted by an
overseas lawyer is sensible – although the latter is now rarely the case.

Do I need to get my will drafted by a French lawyer for it to be valid?

Your will does not need to be drafted by a French lawyer for it to be valid – and contrary to what you may have been told, English wills (in most circumstances) have been formally valid in France since 1967.

Put simply, if you are leaving your French assets under a will that is executed in accordance with
English legal principles, even if that will does not comply with French domestic formal requirements, it is valid in France. This is because France is a signatory of the Hague Convention on the Mutual recognition of wills.

Does my French will need to be registered with a French notaire?

No, this is another common misconception.

There are three options in France. A holograph will (handwritten will) is valid in France (under certain circumstances) and so is a formal notarial will. As described above however, properly executed non-French wills are also formally valid – such as your English will, provided it has been correctly executed in accordance with the UK Wills act of 1837.

Will Brexit affect my will?

Many of our clients are worried that Brexit will mean that they can no longer take advantage of the
Brussels IV regulation – specifically they are worried that if they make an election in their will for ‘British’ (England & Wales, Scots or Northern Irish) law to apply, then it will no longer be effective.

The good news is that it will make absolutely no difference in terms of the devolution of your assets
(who gets what when you die) whether the UK is in the EU or out of the EU and the reason for this is
that the UK opted out of the Regulation and so the UK is already treated as a state outside the EU for succession purposes.

The only difference a Brexit would make would be that the UK could not, in the future, opt-into the
Regulation and as there is currently no sign of that happening, the point is merely academic.

To illustrate: nationals of countries outside of the EU, for example Australia, can make an election in their wills for Australian law to apply to their French assets.

This means that you can choose to avoid French forced heirship rules, and leave your property to
whomever you like if you make a will and ensure that an appropriate election is made.

For further information contact – the author Charlotte Macdonald, or Daniel (Dan) Harris in the cross-border unit by email [email protected] – or by telephone on + 44 (0) 1225 337599