A guide to the different areas of the Aude, Languedoc Roussillon

The Aude (sometimes referred to as the Pays Cathare) is department 11 in France and takes its name Aude river which runs through it. It is the largest of the five departments in the Languedoc-Roussillon region, covering an area of 6343 km2. Its land rises in some parts to just under 2000 metres above sea level and stretches northwards to the Black Mountains and southwards to the foothills of the Pyrenees. The Mediterranean coast forms its eastern flank and its western border cuts through the Quercorb plains south of Toulouse, past the Plantaurel Mountains and down to the Sault Plateau. It is bordered to the north by the Hérault and the Tarn, to the south by the Pyrenees Orientales, and to the west by the Ariège and the Haut-Garronne departments. 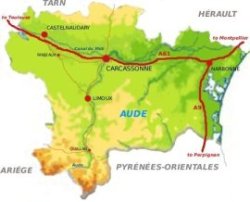 The Aude is only just now starting to see real development in its tourist industry, and because of this it remains for the time being a real treasure for many property buyers who are charmed not only by its stunning landscape and fantastic location, but also by its very competitive house prices. The area is bursting with potential – it is possible to be within an hour from both the beaches and the ski slopes, making it a great area to invest in! Furthermore, since the main motorways run along the north and east of its perimeter linking Carcassonne and Narbonne to Toulouse and Perpignan, the rest of the interior of the Aude enjoys a less hectic pace of life, and retains the unspoilt tranquility that other areas of southern France have lost.

Where on earth is malpere?

The legacy of the rich history of the Aude is that there is often more than one name for its different areas, some of which are used in administration, others appear in tourism guides and yet others are only known by estate agents! By and large the department is usually divided into five areas: Narbonne and its surrounds, the Littoral Audois, the Corbières and Minervois, Carcassonne and its surrounds, and finally the Lauragais and Haute Vallée.

The Lauragais encompasses the west of the Aude and forms part of the region known as the “granary” of the south of France. Here you will find the rolling hills and plateaux devoted to the mainstay of the Aude: agriculture. The landscape is verdant and interlaced with streams and rivers flowing over towards the Aquitaine basin west of the Languedoc Roussillon. This area is also home to some stunning medieval towns such as Fanjeaux and many castles like the one at Chalabre where regular medieval festivals are held. The rolling hills of the north Lauragais then give way to the more dramatic foothills and forests of the Pyrenees in the south Haute Vallée (Malpere!), with some of the most incredible vistas of the mountain range itself beyond.

The east of the Aude is given over mainly to the winemaking areas of the Minervois to the north and the Corbières to the south. Of the two, the Corbières is the least populated as the landscape is made up of 220,000 hectares of hills covered in aromatic garrigue (scrub) and vines. It has a wild kind of beauty and is scattered with tiny hamlets, independent farm holdings and ruined Cathar castles. Property buyers can be assured of a remote location here, but will need to be prepared to drive a lot as most facilities are located nearer the larger towns east and north of the Corbières.

The Littoral Audois is the area stretching along the coast of the Aude and inland to cover the étangs (lagoons) south of Narbonne. The enormous expanse of beach along the coast makes this the ideal area for sun lovers and for those looking for a sound investment opportunity. The coastal resorts of Narbonne-Plage, Saint-Pierre-sur-Mer and Port-Leucate have only recently been developed, so much of the housing is very new and modern. However, there are also the older more charming seaside towns of Gruissan and Sigean with a more picturesque appeal.

Carcassonne, the administrative capital of the Aude, and its surrounds are ideal for commuters. Along the routes in to these towns and the Canal Midi which runs around the north of Carcassonne, you will also find many beautiful villages such as Castelnaudry and Rennes-le-Chateau and thermal spas such as Alet-le-Bains and Rennes-le-Bains. Carcassonne is also famous for its fantastic Cité – the medieval fortified town which is now a classified UNESCO world heritage site. It is, therefore, well served with restaurants and hotels and currently represents a good investment opportunity with the recent popularity of all things medieval thanks to the Da Vinci Code and Labyrinth books and film, and the continued development of the airport at Salvaza.

Whilst Carcassonne trades quite blatantly on its cultural heritage and thus is very much on the tourist trail, Narbonne has remained somewhat ignored by the majority of holiday makers – to its great benefit. It is a very pretty town, with the Canal de la Robine running through it, flanked by a grand avenue of birch trees shading elegant town houses, outdoor bars and bistros. There is history and culture to be found at the Cathedral Saint-Just, and Narbonne also boasts excellent clothes shopping and a fantastic indoor market. Narbonne is the Aude’s hidden secret!

The Aude is served by Ryanair from Salvaza Airport, ten minutes from the centre of Carcassonne, with routes to London Stanstead, Nottingham West
Midlands, Liverpool, Dublin and Brussels.
Toulouse is just an hour away from Carcassonne
by car, and Montpellier less than two hours.
There are good train links in both directions
from Carcassonne, and there is also access
by boat via the Canal du Midi.