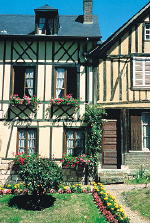 Départements: Départements: Calvados (14), Manche (50), Orne (61), Eure (27) and Seine-Maritime (76) The northern coastal region known as Normandy is in fact composed of two regions – Haute Normandie and Basse Normandie – and it has much to recommend it. Verdant countryside, sandy beaches, picture-postcard charm, a myriad of seafood and white fish, not forgetting cider, Calvados and Camembert; with all this on offer you can almost forgive the climate. Average daily temperatures are practically identical to those in the south of England, ranging from 6.4 °C (44 °F) in February to 22 °C (72 °F) in August.

Inland, Normandy is classically green and picturesque. Black and white half-timbered farm buildings are interspersed by apple orchards and lush grazing, and the approach to life is laid back. Depending on the season, the coast can be a livelier bet; in the summer, pretty ports such as Honfleur and the upmarket resorts of Deauville and Trouville attract well-heeled visitors in large numbers, seduced by the beaches and boutiques, ritzy restaurants, casinos, polo and sailing that have earned this area its unofficial name of the “Parisians’ playground”. However, there’s no shortage of alternatives if you prefer a more down to earth lifestyle, as antique shops, lively street markets and characterful cafés abound in this region.

The total population is almost 3,200,000 and activity here is mostly agricultural, combined with some industry situated near the large port of Le Havre, the city of Rouen, and the Seine River valley. Well-served by sea, road and rail connections, Normandy’s easy access from the UK makes it a favourite with British buyers, and many Parisians have a second home here, too. Good road links from the Channel Tunnel and all the Channel ports make it simple to pop over from the south of England, and low cost flights from the UK into Paris are a speedy alternative.

There’s an abundance of farm buildings and barns, land and lakes for sale here, and Normandy features a wide range of property styles – timber-framed barns, town houses and châteaux are all available. Considering its proximity to Paris and the south coast of the UK, this region still boasts some relatively undiscovered areas, providing property and countryside ideal for the hunting, shooting and fishing brigade. House prices here are a steal compared to other areas of France, although you’ll pay a premium the closer you are to the UK. Related articles on FrenchEntrée.com: A tour around Calvados with French magazine A tour around Manche with French magazine Cities and towns: Alençon, Caen, Evreux, Rouen and Saint-Lô Tourism: and Normandy Tourist Board Climate: Climate in Calvados Climate in Manches Climate in Orne Climate in Eure Climate in Seine-Maritime Enjoyed this Article? Read the best of FrenchEntrée property news each month by registering for our French Property Tips newsletter.