Find your ideal location in the Pyrenees Orientales, Languedoc Roussillon

The Pyrenees Orientales (also known as the Pays Catalan) is department 66 in France and is the most southerly of the departments in the Languedoc Roussillon, its southern limit marking the border with Spain. A relatively small and much more mountainous department compared to the Aude, it covers an area of 4,116 km2, tucking itself under the Aude and into the valleys between the Fenouillèdes hills on its north-west border and the Pyrenees mountains to the south. The Mediterranean coast forms its eastern limit making the department somewhat triangular in shape. Other than the Aude to the north and Spain to the south, it is also bordered by the Ariège department and the principality of Andorra to the west. 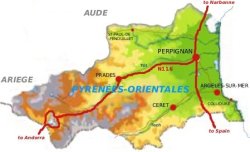 Because of its proximity to Spain and the ski resorts of Andorra, not to mention its own well established ski slopes, its sandy beaches and Mediterranean climate, the Pyrenees Orientales is already very popular with foreign buyers – and who could blame them? The vastly improved transport network, with flights currently running from Perpignan to London, Birmingham, Manchester and Southampton and high speed train links to Barcelona in development, it is an ideal area for property investment. With pretty coastal towns like Collioure and Banyuls-sur-Mer, the very happening city of Perpignan, and delightful mountain retreats it’s easy to see why so many people fall in love with this department. If you’re looking for a convenient location with all the facilities of modern living or a secret bolt hole to get away from it all, you will find your dream location in the Pyrenees Orientales.

The different areas of the Pyrenees Orientales

There are many different areas and communes in the Pyrenees Orientales and at a local level, where is it not uncommon to see places named in French and Catalan or the Langue d’Oc, it can be quite difficult at times to know quite which place is being referred to! Most estate agents, however, tend to divide the department into five distinct areas: Perpignan and its surrounds, the Côte Sablonneuse, the Montagne region, Côte Vermeille to Vallespir, and Aspres to Fenouillèdes.

Perpignan is the administrative and commercial centre of the Pyrenees Orientales and is a very modern and chic city, with a rich and proud Catalan history. Conveniently located just a few kilometres from the Mediterranean coast, with terrific motorway links south to Barcelona and north to Narbonne and beyond, it is a supreme location from which to discover the rest of the region. There is great shopping in Perpignan, cool canal-side bistros, very fine dining, beautiful parklands, great facilities for the arts and sports, and a young and dynamic population, making it very attractive location for a pied-à-terre. The surrounding neighbourhoods tend to be more recently-built, suburban commuter towns, though there are some prettier villages such as Villeneuve-de-la-Raho and Millas.

To the east of Perpignan is the coastal resort area known as the Côte Sablonneuse – the Sandy Coast – a very accurate description of the incredible beach stretching from the great nature reserves at the Leucate-Salses lagoon in the north, past the smaller Canet-St Nazaire lagoon at its midpoint and down to the estuary of the River Tech in the south. This area is very well served with modern resorts – the largest being Canet-Plage and St-Cyprien-Plage – offering a wide variety of apartments and villas overlooking either the sea or the lagoons. These areas are very popular and get very busy in the summer as much of the property there is second homes and hotels, and this also makes it a very peaceful place to retreat to during the low season.

Further along the coast, meeting the Spanish border, the long golden beach gives way to the rockier coast line of the Côte Vermeille. From there one moves inland through the Tech Valley (Vallespir) flanked by the forested Albères mountains (the final Mediterranean section of the Pyrenees range) which connect to the great Mount Canigou. It is a magical area – with strikingly dramatic scenery, improbable villages perched perilously on the mountains, ruined castles and hermitages – a place where history is palpable in pretty medieval towns like Prats-de-Mollo and delightful coastal colonies like Collioure. Property around here tends to be more expensive, but more than pays for itself with the potential to rent homes out all year round.

The area inland north of the River Tech lying between the Aspres forests and the strange rock formations in the Fenouillèdes hills, is by far the least populous area in the Pyrenees Orientales and seduces many property buyers looking for a quieter pace of life. Much of it is given over to agriculture and in particular to the vineyards of the Maury and Agly domains on the northern border with the Aude. On the south-western edge of this area, nestling in the the valley of the River Têt is the very beautiful town of Prades – which presents a very popular investment opportunity as it is the last large town before the mountainous trail westwards to the ski slopes and Andorra.

Finally at the western extreme of the Pyrénées-Orientales, you enter the Montagne region – where there is still the air of the traditional way of life being lived – dominated by the Capcir Plateau which, at 1500 metres above sea level and with hundreds of lakes and streams intersecting lush forested parcels, provides a stunning location for some of the best skiing in the French Pyrenees. This area is reached via the N116 national road, which is lined with many villages providing easy access to this incredible landscape and is a must see location for those looking to take advantage of all the outdoor pursuits available in the department.

There are direct flights from Perpignan Rivesaltes Airport with Ryanair to London Stanstead, with Flybe to Birmingham and Southampton, and with bmibaby to Manchester, whilst Air France runs routes to Paris Orly, Lille and Strasbourg. Barcelona and Toulouse are both only a three hour drive from Perpignan on the excellent motorway system and there are rail links from Perpignan in both directions too. There are plans to install a high speed train link from Perpignan to Barcelona by 2009.