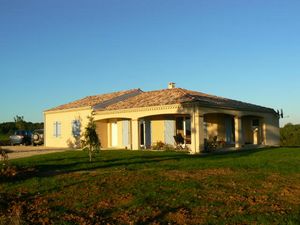 Earlier articles (Part 1, Part 2) covered the legal minefields, the planning hurdles and the petty bureaucracy that we had to endure for 14 months before we even broke ground on the site – do not ever believe the seductive talk from energetic immobiliers and builders selling your dream home. It almost always takes 12 – 15 months from initiation to the date when the foundations and building work starts; and then anything up to a further 9 months to actually build. Part 2 chronicled the actual build which, thanks to an excellent Conducteur de Travaux or Project Manager, the team of tradesmen and work flowed along as things do in the Lot in a way that is best not challenged. We were promised a delivery date, nine months forward and we had the house delivered in eight. That, paradoxically, was the easy bit.

The house was essentially finished, ahead of time and to budget. There were minor remedial works but these were attended to quickly without prompting. The build quality and fittings are excellent and considerably higher that we expected The Electricians checked the systems and the bewildering contact breaker board with it’s 68 circuits – in France the wiring system is quite different from the UK and EDF are super picky about it.
Note: Be warned the frequently used shortcut of getting an electrician friend from the UK to do it on the cheap will land you in all sorts of trouble. 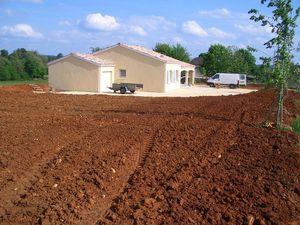 The under floor heating was run up and performed as expected, the mysteries of the new kitchen appliances were uncovered with the help of instruction manuals in French (once again, I bang on about the need to learn good usable French). The Terassier had finished our fosse septique which was constructed to the latest stringent regulations and then inspected by the appropriate authorities to verify compliance. The garden had been levelled and contoured but still looked like a Martian landscape – deep red soil which reminded us of Devon and which created clouds of red dust in the dry weather.

Note: The eventual cost of creating the new garden with the plants, trees, shrubs, obligatory irrigation systems, garden machinery and bits and pieces that are easily taken for granted will probably reach €10,000 on top of every thing else, so be warned.

We were given the vital Certificate of Electrical Compliance and then were technically up and running. Our Conducteur de Travaux held a small key handing-over ceremony with a bottle of Champagne and it was finally ours. Every bit up to build expectations. Ready for the furniture and the big switch on!!

Alas once again the utterly unreliable EDF fouled up – no power! We had initially applied for power in September 2006 to give plenty of time having been warned about EDF’s eccentric approach to customer service, eventually had the pole installed and the line brought up to our property early April 2007, 8 months later. But we still had no connection on the day planned for the great switch on – we had a fully functioning new home, ready to move into but no electricity. Our EDF designated contact was ‘en vacance’, his office in Luzech closed and apparently boarded up. A case of ‘La fin des Haricots’ (a French euphemism for Catastrophe!) 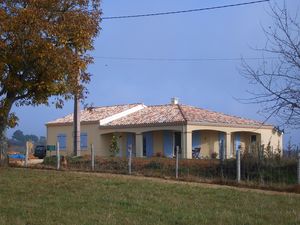 Once again, we hot footed down to the EDF Regional office in Cahors (by now we had a season ticket for their car park!), spoke to and gave details to several charming but utterly disinterested fonctionnaires in ascending order of seniority, made fruitless phone calls to others in EDF at a higher level and enlisted our Mairie, all to no avail. We learned that we were 1755th on the list; EDF installations were said to be in ‘melt down’ with a backlog of work stretching into the next millennium. We would simply have to wait our turn and, in any event, did we not realise that many of the key personnel were taking a late spring holiday. How could we possibly expect those poor exhausted and overworked EDF employees to be interested on our plight – were they not also entitled to a holiday!!!

Note: do not be defeated-– Dunkirk spirit and all that – we decided to move in anyway in the last week of May and rely on Camping Gaz and portable electricity Generators and thus we started our life in the dream home!. Thank heavens it was summer.

Through an acquaintance, we contacted a mid range EDF ‘suit’ who, noted the antics of some of his operational colleagues (he was scathing as usual as they were not his department), immediately had technicians up to our house to make the final connection. Home and dry? Not a bit of it, they left shortly after they arrived having coupled the three phase mains power to a junction box on our pole, leaving 40 metres of heavy duty cable, said they would be back after lunch and then disappeared for a further 10 days. It transpired that they were EDF subcontractors and could not return until they had further authority from their EDF controller who had the formal compliance approvals and was on holiday. It was becoming Catch 22. When they did finally arrive back, it took them less than 20 minutes to finalise the circuitry and behold ‘ we had power’. 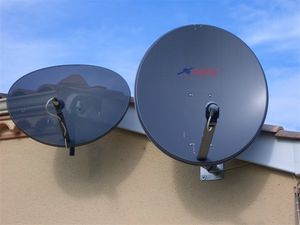 Whilst the EDF saga was unfolding, France Telecom demonstrated their own brand of disinterest in Client support. They had given us a phone service but, in place of the expected and promised ADSL Broadband (of great importance to us and a principal criterion when we bought the land and which we had enjoyed on the same number in our previous home nearby), we were given old fashioned steam driven ‘dialup’ on the grounds that our new property was 78 metres too far from the exchange; notwithstanding that our immediate neighbour has ADSL from the same pole that carries our telephone cable. That 78 metres demonstrates, almost perfectly, what the French fonctionnaire mentality is capable of and what you are constantly up against. Mind boggling indifference and world class bloody mindedness. So being old hands at this and not to be defeated, we decided to get our ADSL broadband downloads by satellite from a German supplier for €10 per month – ordered, supplied and operational in 4 days. Speaks volumes!! So finally, we were up and running, almost two years from the moment in the Immobilier’s office when we signed the Promise de Vente.

The first question is usually ”So why new build?”. The answer is simple – end result. The first romantic notion in many minds when contemplating living in the South West of France revolves around old stone houses, stone flagged terraces, roses on trellises, walking to the baker each day and so forth. The reality is that ‘old stone houses come in three types: Firstly, crumbling damp semi ruins ready for rebuild at a renovation cost that is usually a minimum of twice the initial purchase price; secondly, houses designed as summer ‘lets’ or second homes, often converted on a budget with minimal facilities and with no thought for the winter; or lastly superbly converted houses with high standard facilities which could easily cost you twice your budget. A new build overcomes many of these problems since they are built to your requirements, to local designs or themes, to high insulation standards, double glazed, centrally heated; fully fitted kitchens and bathrooms, plumbing and electrics that work, septic tanks that do not asphyxiate the neighbours and all at a known fixed contract price. 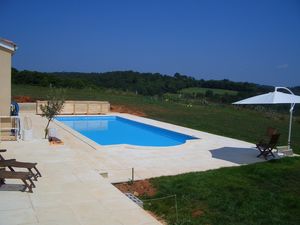 The next question is clearly “Was it worth it?” The short answer for us is yes – the end product is usually a superbly built home with a 10 year unconditional guarantee. However, the downsides have been the time it took to complete – almost a year longer than we were led to believe; our under estimate of the bureaucratic lethargy, the total indifference of EDF, the vagaries of France Telecom and importantly, our under estimates of the cost and disruption of creating a new garden.

The final question is ”Would we do it again?” The answer is a qualified yes, but this time, knowing the ropes and short cuts, we would cut out the ‘suits’ and deal directly with the Conducteur de Travaux and his builders to minimise time and money wasted. This way will certainly trim the end cost but once again, good command of French is vital – lightweight ‘O’level is barely adequate. It can be done with good French, patience, a command of building techniques and the negotiating skills of an old fashioned horse trader but the paradox is that you only get the know how if you have first hand experience of the process and the battle scars to prove it. You could, on the other hand, if the prospect frightens you, just go and buy an off the peg new property on the local lotissement or private estate. You will pay more but then you might just think that your sanity is just worth the premium. Good luck!