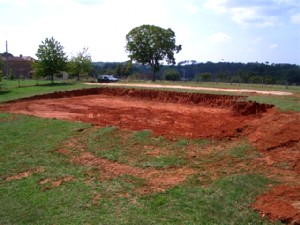 It had taken us a year to battle through the minefields of French bureaucracy, architect’s sloth and planners lethargy to achieve the full planning permissions necessary – see Part 1. By this time, the project was already running 5 months behind schedule.

We met our Conducteur de Travaux (Clerk of Works) for the first of many site meetings. We registered our concern at the continual time slippage which was beginning to make a mockery of our budget. He was very helpful, was rude about the incompetent ‘pen pushers’, agreed to reschedule the building programme, gave us a provisional completion date and, good to his word, within a couple of weeks in mid August the Terrassier (ground works contractor ) and his large diggers appeared. We came to respect, admire and have a close relationship with our Conducteur who had a very clear view of what was necessary, had a strong authority, the respect of his team of builders and unflagging enthusiasm. (Not always so in the French building trade, sadly!)

Moral – If you need something doing, find the real Organ Grinder and stop trying to deal with the desk bound monkeys who enjoy playing pass the parcel with your project. 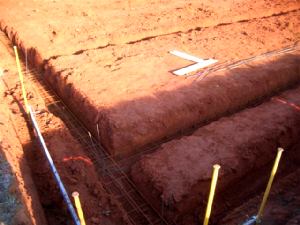 August 2006 – the Foundations Are Dug

The Terrassier finished the earthworks, moving mountains of earth and creating the foundation trenches. It had transpired that the plans given to him by the architects meant that he had dug it about 45cm too deep, which meant that two extra courses of foundations were necessary. We resolved this problem pragmatically with the Conducteur (Thank God not an Architect to be seen!); and pouring of the concrete foundations started in earnest over enough steel reinforcement for a multi-storey car park. Three anxious weeks passed to let the concrete set before we saw a bricklayer, but then early one morning, the gang appeared mob handed and it seemed that within a week, the foundations and walls were up to floor plate level – we were on our way. Then abruptly mid week, they just disappeared taking all their toys with them and leaving everything in a state of chaos. Then just as mysteriously, they reappeared 10 days later – no reason or excuse – and continued on upwards at prodigious speed, as though nothing had happened.

Moral: do not be un-nerved at the unexpected, resist the temptation to rant and rave – the ways of French Maçons are a complete mystery, even to themselves but when they do work, they really work! 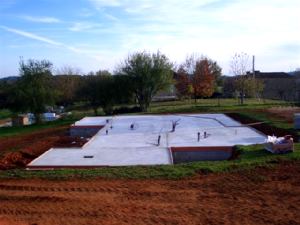 We already had water installed on site. EDF was contacted to get electricity supplied to the site. We confidently and stupidly expected the pole and supply box (branchement) to arrive in a few weeks. Sadly, EDF are a totally unsympathetic monopoly living in their own time warp (more about them later).

Moral: Continue to actively nag, pay personal visits, use the sympathy card, get the local Mayor involved and invoke Divine intervention or whatever you can, but do not give up. Just remember, they have a job for life, couldn’t care less, cannot be sacked but they are sensitive to being exposed to public ridicule and the bright light of day!

November 2006 – the Walls Are Finished

The walls are all up, archway beams in place, Genoese roof edging done, building site cleaned of masons’ debris and by late in the month prepared for the Charpentiers and the roof. We were anxious to get the roof on, tiled and closed up before the bad weather. Over the Christmas period and by early January the ‘Chippies’and Roofers’ had done their bit and the roof was now finished.

Moral: Remember the Prozac, stiff upper lip or strong liquor, they come in handy just about now to calm the nerves and warm the bones; chilled by hours of site visits. 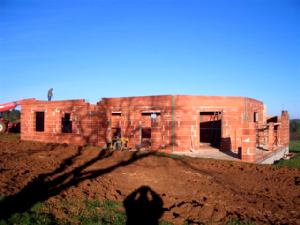 Our splendid Conducteur came back from his Christmas break with renewed vigour and galvanised his team into action. Almost at once, all the doors and windows were fitted and the guttering erected. Roofing checked and final tiling completed. Spirits were raised and it was beginning to look more like a house and less like a set for ‘Oh what a lovely war’. EDF still buck-passing.

Moral: Don’t get over excited at modest advances, stay calm and see if it lasts!

The spurt was carried on into February and was followed by electricians and interior craftsmen followed by more electricians and then kitchen fitters to check final measurements. We became positively giddy at the level of industry. Our Conducteur, who we met on site frequently, was clearly in a whip-cracking mood and it was beginning to really show results. Outside, large sized trees were ordered from the local Pépiniériste (specialist tree nursery), delivered and planted. The final landscaping of the site was discussed and planned with the Terrassier whose finesse with a 28 tonne digger was absolutely outstanding and his advice most helpful. EDF continued to be unhelpful and evasive.

Moral: Polite praise for effort however limited is well received as does chatting to the tradesmen in French – they are generally so unused to the English speaking to them in comprehensible French and builders patois to boot – the shock will make them accept you as a recognisable human being and often works miracles. 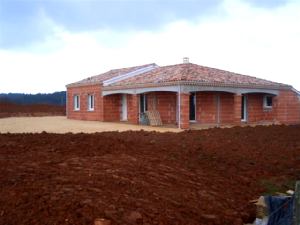 Things really started to happen with bewildering speed starting with the return of the Terrassier to create the final entrance drive, move mountains of earth, dig the holes for the swimming pool, the fosse septique (septic tank system) and, most important for our gardening plans, a very large underground closed concrete cistern to conserve rainwater from the roof; a vital resource in the long hot summers in the Lot. The rear terrace was started by the Maçons and completed in 5 working days – astonishing. The plasterers arrived and within two days had done their bit. Electricians and Plumbers came and went in that mysterious way known only to the universal building brotherhood. EDF simply did not appear at all or recognise our existence!

Moral: Continue the charm offensive, keep out of their way and don’t suddenly have any bright ideas that change the plot – however trivial. They will definitely screw things up! 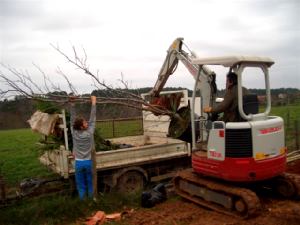 The pool installers started to prepare and shape the pool cavity. Three days later the ready mixed concrete arrived for the pool floor, was laid and shaped followed by the pre cast concrete side sections pumps and filtration units. We had opted for the slightly more expensive salt water system instead of chlorine. Reasons? Less damaging to eyes and skin, gives you softer pool water in an area where the water is notoriously hard and alleviates the algae problem. Our plans also incorporated a ‘ Nager contre le courrant’ system to create a strong current to swim against for exercise. Well worth considering at a modest extra cost. Frequent contact with EDF did not rouse them from their continued sloth! 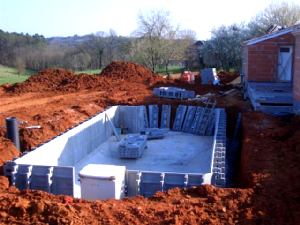 The outside landscaping began to look like a garden and not like a building site.. The progress inside continued at speed. Floor insulation plus the complete under floor electric heating system was laid, skimmed and tiled throughout. The plumber fixed the hot/cold water supply, kitchen water, bathrooms, sanitary fittings and exterior robinets (taps). How they achieved this when the electrician and plumber continued to come and go like wisps in the wind is a complete mystery. The Tilers, who were more conspicuous, then concentrated on finishing the outside terraces. Volets were painted and the crepi wall rendering applied. Still no sign of EDF and the expected electricity connection. What a surprise! 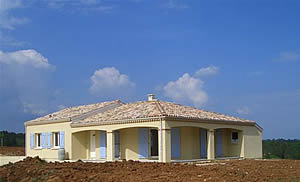 We started planting and planning the details of our garden which, we hope, will be an eco friendly mixture of wild flowers and decorative bushes rather than a traditional manicured English garden which, given the summer drought issue, is pretty impractical in the Lot. We needed our plot rotavated, rolled and sown with prairie grass (a hardy drought resistant strain) to catch the last of the spring rains and reduce the need to use sprinklers. Having received several quotes that made our eyes water, we were introduced to a local garden contractor who living in a real world, quoted us a price based on local rates and not ‘ incomer rates’ and work started two days later. He and his wife have now become personal friends; again, such is the way if you integrate. EDF at last planted the pole; strung the cable and we were on, our way to electricity so we foolishly thought. Oh deluded fools!

Moral: When considering the garden, ALWAYS get at least three ‘devis’ (quotes) from contractors and shamelessly haggle them down. Sadly many of the incoming English, not speaking adequate French just ‘chuck money at the problem’ and this has often given local suppliers the idea that all the incomers are super rich and deserve to be fleeced!!!

As a general comment, you must expect a great local curiosity – it is normal to be nosey in France so we were not surprised when a deputation of neighbouring farmers arrived unannounced to examine our activities, and discuss the ‘petit chemin’ issue (see Part 1) Much gesticulating emphasised by dramatic pacing up and down fortified by muttering in the local ‘Occitan’ patois. To avoid a potential stand off, we agreed a suitably French compromise and all parted with great hand shaking, bonhomie and protestations of ‘communauté’ – such again is the way in rural France. We are now assured that we will not have a tanker full of flyblown and odiferous cow slurry abandoned on our boundary in mid August.

Moral: Be sure to make positive and amicable contact with the locals – this is where good understanding of French is essential, as French Farmers love a good debate. They have, however, more ways than you can imagine making life unbearable if you upset them.

In the next episode, I cover the continuation of the wrangle with the unhelpful EDF – who have to be the most consumer unfriendly and indolent monopoly in the universe – and will try to summarise our two years worth of experience and answer the questions – was it worth it and would we do it again?