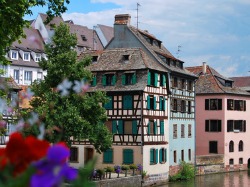 Thanks to the Channel Tunnel and improved fast roads, British buyers can drive to north east France in two or three hours – ideal for those who need to commute back to the UK on a regular basis. Sun-worshippers would do well to house hunt further south, but there’s no shortage of attractive coastline and countryside here, giving scope for numerous leisure pursuits.

Brick and colombage (half-timbering) tend to be the norm, but the “new build” option is worth considering, too. Having a house built to spec may be cheaper than undertaking a renovation project, and the latter is hard to find here, as Britons, Belgians and the Dutch have been buying steadily in the Pas-de-Calais and surrounding areas for several years. The elegant coastal town of Le Touquet commands premium prices (Etaples is a cheaper alternative), but look inland and you’ll find equivalent properties for considerably less – a small farmhouse in habitable condition and a good location might sell from around €100,000.

Just over an hour’s drive from Calais, Lille is a thriving modern metropolis (voted European City of Culture 2004) with its own airport and Eurostar stop (the train journey is only two hours from London). Boasting a rich cultural heritage, Lille is a good choice for city slickers seeking a pied-à-terre within striking distance of Paris, Brussels and Luxembourg. Studio apartments start at around €50,000 while a house within the city itself can cost upwards of €160,000. To the south is Picardie, a region that boasts architectural styles and prices similar to Pas-de-Calais, as well as prehistoric sites, gallo-roman remains, abbeys, churches, castles and WWI battle grounds. The A16 autoroute provides a fast and easy route to Paris, but proximity to the French capital and the UK means that property here is highly sought-after.

Moving further east brings you to the region of Champagne-Ardenne, famous for its bubbly and breathtaking scenery. Featuring medieval castles and churches and villages where time seems to stand still, this region is slightly warmer than Brittany or Normandy. It has seen an influx of home buyers from Benelux, but so far the Brits have been noticeable by their absence and prices have remained fairly constant – so perhaps now is the time to make that move. The Champagne towns of Reims and Eparnay feature elegant three-storey town houses and smart apartments, but the surrounding countryside is good hunting ground for a stone-built maison de village at a modest price. Similarly, you may find better value for your euros by avoiding the western parts of the Aube (10) and Marne (51) départements, which are closest to Paris.

The region of Lorraine deserves a special mention because of its very reasonable property prices. House sizes here are larger than average for France, and the relatively low number of ex-pat residents and tourists makes this region particularly attractive to those who long to be far from the madding crowd. The Vosges mountains offer plenty of scope for outdoor pursuits, including climbing, hiking, ski-ing and mountain biking, with lakes to please watersports fans. Bordering Germany, Belgium and Luxembourg, this region has a pan-European flavour and the German influence can be found in the local beer and cuisine.

To the east of Lorraine lies Alsace, one of France’s smallest regions. Sharing borders with Germany and Switzerland, Alsace is renowned for its pretty medieval villages and picturesque architecture of half-timbered houses, its cuisine (choucroute, a dish of sauerkraut served with smoked ham, sausages and potatoes is a local speciality), its dry, crisp wines (Gewurtztraminer, Muscat, Pinot Blanc, Pinot Noir, Riesling, Tokay Pinot Gris, and Sylvaner) and of course Kronenbourg beer. Essentially a region of vineyards and orchards, Alsace’s regional capital is Strasbourg, a truly European city with an excellent university and a thriving student population to match. Although property prices are higher than average here, the size of homes combined with the region’s attractions and the bright lights of Strasbourg mean there are good prospects for tourist accommodation, with government grants sometimes available for conversion work.

Temperatures across north east France are similar to those in south east England, ranging from 5°C in December to 26°C in August. Transport links to this area are plentiful, with low-cost flights from a variety of UK airports to Brussels-Charleroi and Strasbourg, the Eurostar service from London Waterloo to Lille (where you can change for connections on to Metz, for example), and a host of ferry and hovercraft Channel crossings between Dover-Calais and Dover-Dunkirk.