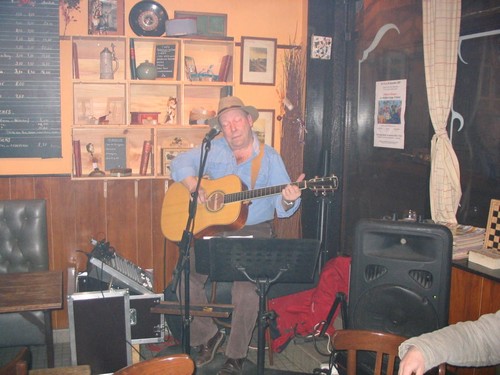 If your looking for a friendly face whilst visiting Auxerre in the Yonne, why not pop into a shop in the town centre called Village Deco? Village Deco sells English style, solid pine furniture that are highly appreciated by the local Burgundians. As you enter the shop, you will be greeted with a very English sounding “Bonjour”, Simon Wallace who runs the shop with his French wife, Marie-Odile will be only too pleased to make your acquaintance.

Simon Wallace, a 49 year old ex dispatch rider and musician from London, arrived in Auxerre in 1992, after having toured the world from England to India, before deciding to finally settle down in Burgundy. He met his wife, after going on a hot air balloon ride in the Yonne. Marie-Odile was the pilot and she has managed to keep him flying over the Burgundy skies ever since!

Simon says “I met my wife in Auxerre, in between two music tours in Australia. I was actually intending to live there, but I had enough of a big town life in London and Auxerre was really welcoming; good food, good wine and good women. Auxerre’s a beautiful city but it’s on a human scale and so not too big”.

He also says “I didn’t speak a word of French when I arrived but you learn really quickly when you live in the country. It used to annoy me in the beginning though, because I would follow the conversation, understand it and want to participate, but by the time I’d thought of the sentence in French, the conversation had moved on!” According to Simon however, after six months of living here he was bilingual, “It’s really great speaking another language ’cos it really opens up your mind to things. I even read a scientific report that says that it builds and stimulates the neurones in your brain, it’s amazing”.

Simon, set up his furniture business to have an income, once he’d decided that Auxerre was definitely The Place to be. One of his friends owned a furniture wholesale in Great Britain and that’s how he got the idea. He says that, “it’s an interesting job ‘cos you get to meet lots of people from all walks of life and it’s not too physically tiring. And if your French isn’t great, that’s no problem because our customers adore our English style furniture and they find an English accent all part of the charm! Our suppliers even speak fluent English. It’s also great because it’s a business that’s ideal for a couple.”

However, Simon’s first love is his music, his mother was a jazz singer and his first band performed on stage in university bars when he was just 15! Simon has a varied cover version repertoire of rock, blues, reggae and jazz and he also composes his own songs and music, travelling all over France and Germany. You can visit his music site at: http://simonwallace.free.fr

Now, Simon’s plans are to concentrate more on his music and to try to perform even more gigs, however since his furniture business is doing really well, it’s difficult to combine the two activities. Simon has therefore decided to sell his business to be able to invest more time to his music. If you are interested in finding out more about his shop, Village Deco in Auxerre, you can contact Simon at and here’s wishing all the best to Simon in his music career!