Terry’s Tale of Renovating in the Limousin

We decided very early during our renovation, that time would not be an issue, our renovation had to be enjoyable and not just all about work. We didn’t want to be two week tourists, sawing wood and knocking in nails. We wanted to get to know the proper France, the regional food and the people, so each visit, time would be divided into progressing the project and finding out about our hamlet, the Creuse and learning the language. So it is true to say that progress has been slow. The difference between England and France soon became apparent, there was hardly any traffic, no litter, good manners, and the French were definitely more family orientated, it was like stepping back in time, to England back in the fifties.

The Creuse is a poor area, with main employment being farming, all things to do with forestry and now tourism. Cluptat is a pretty and tiny hamlet which nestles deep in the heavily forested and mountainous region of the Creuse. The hamlet consists of twenty four houses and barns, half of these are inhabited, and half are used ‘pour les vacances’, there isn’t a shop or a pub, but we do have a daily visit from the travelling shop, providing basic provisions and the postman providing news and gossip. 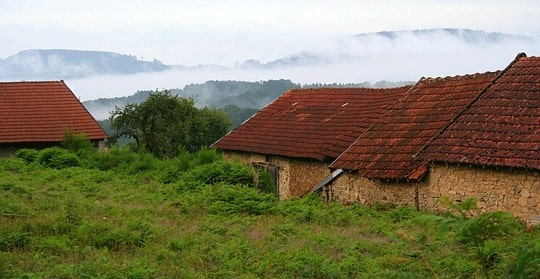 The hamlet is a true working farming community, which goes to bed at ten o clock and rises early. Cluptat is built in the shape of an inverted Y, the single leg of the Y being the longest, and our house being the last inhabited building at the top of the single leg, after us, is one barn then nothing but forest and fields, the village is also on a hill, with our house at highest point. The view down the village is impressive open aspect of fields and forest, with the 17th and 18th century cottages and barns dropping downwards, and dominated at the bottom by a high forested hill. As the seasons change, so do the views, in the summer glorious sunrises and sunsets, in the autumn the trees continually changing their colours and shrouded by the early morning mists, we haven’t yet experienced the spring and winter months, that’s a treat still to come.

Our house may be on the end of the leg, and the road turning into a dirt track, and Cluptat may lack people, and be a very quiet hamlet, but for all that, the road is still busy with all kinds of farm vehicles passing at irregular times, from combine harvesters, tractors, hay cutters, bailers and the girlfriends and wives delivering lunch. Everyone waves and shouts ‘BonJour’ as they pass, and quite often stop and politely enquire in french of course “how are you today”. 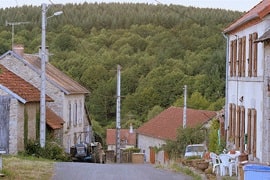 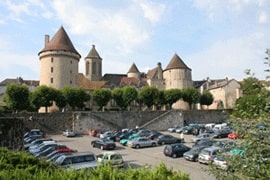 Life in the French countryside is so very different, compared to that of England, the pace is so much slower, with the importance being attached to social graces and communication, if you are working on the outside, be prepared to be stopped often by neighbours who are curious and want to say hello. We learned the etiquette quickly, you always shake hands when meeting and say bonjour/bonsoir (depending on the time of day, bonsoir, being usually after 6pm). After a short period of time the handshake is dropped, (with the women) and a kiss on each cheek becomes the rule and then when you are really accepted, the two kisses are increased to four kisses, at least they are in the Creuse.

The friendliness of our neighbours and passing farmers always amazes us, one evening after a short country walk, one of our neighbours asked us to take a drink with them, we graciously accepted, four others joined us, and five hours later, after Ricard, vin rouge, and a superb impromptu meal, we finally made it home, pleased and a little worse for wear.
Over the years it has often been said to my wife and I, that the French dislike the English, in our many visits to France, we have never experienced anything but kindness, politeness and curiosity. French society is built upon manners, protocol and family, and works superbly well even the children will say good morning and shake hands with the neighbours and friends before boarding the school bus.

The nearest town is Bourganeuf, sixteen Kilometres away, a town which is dominated by a beautiful chateau, built sometime during the crusades. The market square hosts the weekly market on a Wednesday, with everything you need from sewing machines to farmers produce. Market day is without doubt the busiest day of the week, everyone from miles around comes to town to shop and catch up with friends, the cafes open early and benefit from the massive influx of people, parking is always free and is anywhere and everywhere, which includes the pavements and any spare ground. It’s very rare that you come across parking charges and I’ve never seen a traffic warden anywhere in France. In the summer time the market spans two squares, and both are full of traders, cheese, vegetables and fresh meat tend to dominate, with at least six cheese stalls, and amazingly three fresh sea food stalls, I say amazingly because we are such a long way from the sea. The Markets tend to close early, and life then returns to its slower and less frantic pace. The traffic disappears for another week, and the people go about their daily lives once more.

Don’t to come to the Creuse if your are looking for excitement and nightclubs, you will be hard placed to find any.

Life is as it should be, slow, well mannered, with time to chat and enjoy what is one of France’s best kept secrets.

Terry Ferdinand lives with his wife Catherine in the north east of England where he hosts a radio show. You can find out more about Terry’s radio show here