A Diary of a Barn Conversion in the Limousin – Part 2 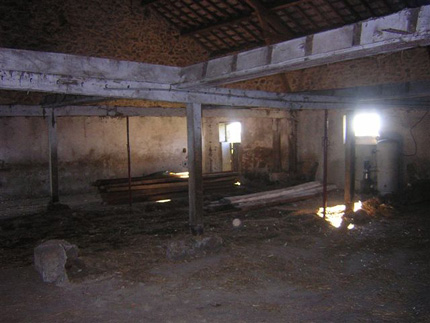 A month on and the planning permission has arrived..

And here we are over a month later. Physically, not a great deal has happened over the last month though behind the scenes we have made lots of plans and decisions which are now coming together. We have received our ‘Permis de Constuire’ which we are absolutely thrilled about because we have heard many a story about the plans taking months and months to be approved. Ours took only 4 weeks and were agreed first time round so we are very grateful to the architects who obviously did a great job.

The barn and the land was previously owned by the local Agricultural College. They have been along to put up the fencing which separates our area from theirs so my imagination is running riot with ideas for activity zones for the kids though I‘m sure nothing will happen on that front for some time! Hopefully the college will return their cows to the land now the fence is in place and there is no risk of them escaping off down the hamlet. 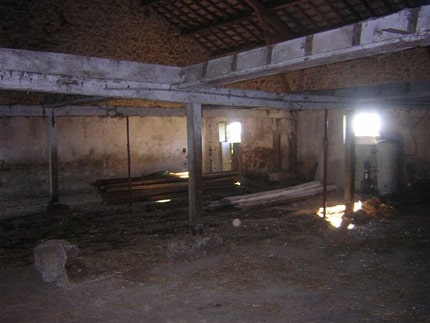 The hay and bricks from the first floor were all cleared out fairly quickly then we began work on removing what we thought were probably reinforced concrete troughs. Luckily for us they turned out to be built with stone and earth with a cement coating so whilst it still took some doing to remove them, it could have been far worse! Stuart and Dan, our friend and builder have now removed the 70 something timbers from the first floor and the only ones remaining are those that need to stay for the time being due to the structure of the building. We did contemplate leaving them all in place as they turned out to be in pretty good condition but we decided against this for various reasons. Firstly, we had decided to raise the ceiling height by a few cm’s so they would have all needed to be raised anyway. Secondly, the weight they had taken with all the terracotta tiles had caused most of them to bow to some extent so it would be a very labour intensive task to pack them all out in order to create a level basis for the flooring to go on top. Lastly, we already knew that we would not want the timbers exposed from below so we felt that it would be better all round to replace the whole floor with new timbers.

The water board have been to connect us so we now have a water connection at the end of our driveway. We have hired a digger and driver to come and dig us a trench up to the barn so we can actually connect it up to the property. This should be done within the next week so that’ll save keep bringing bottles of water from home for the mandatory cups of tea! 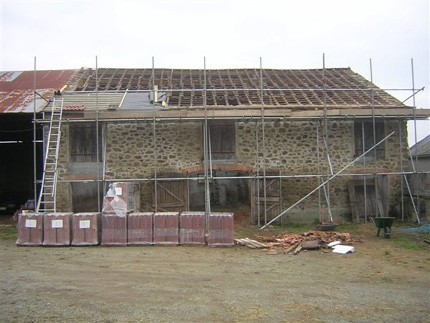 Our current project is the roof. Although the roof was actually in very good condition we decided to strip it all in order to lay some kind of roofing felt. The tiles on the back were all laid fairly recently so we will be able to reuse them. The ones on the front were older and some were deteriorating. After much deliberation we decided to just replace the whole front as the style has been discontinued and we were having trouble finding replacements for that many. Scaffolding was due a couple of weeks earlier than it arrived but because of the snow several weeks back, it meant the previous people using the scaffolding were delayed and in turn that has put us a couple of weeks behind but work is now underway. We are working on this with another friend, Ryan, on a labour exchange basis. When our roof is complete Stuart will help him work on his. It’s a great way to work because it saves all labour costs which on a roof the size of ours would have been horrendous. 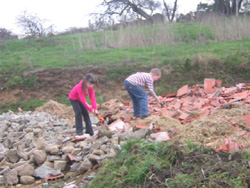 We have also been really lucky in that another friend Mal, in a moment of madness, offered to come and help us for a few days if we were prepared to put him up for a few days and feed him. We nearly bit his hand off!! The weather hasn’t been particularly kind to us but it hasn’t stopped work for too long so far. By tomorrow evening we will have finished the whole of one side. Hopefully the other side will be finished in less than 2 weeks though it’s always hard to judge when you have to juggle working in between. Of course, when we’re up against the clock we can always rely on a bit of child labour if the kids aren’t at school. A bit of pocket money bribery can clear a pile of rubble pretty quickly!! 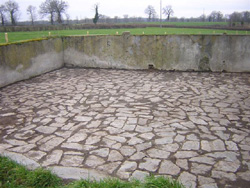 Seems a bit low down on the priority list but there was a period of a couple of hours where I wasn’t able to do a lot else so I thought I‘d tackle a little project outside. We have an area next to the hanger with a low wall surrounding it which was all overgrown with grass and general farming debris. On clearing it we discovered beautifully laid rocks forming a courtyard area. All it needs now is jet washing to clear some of the mud and, voila, our barbecue garden is ready!

We are now making plans for laying the first floor. We have toyed with lots of ideas and have finally made a decision on the type of floor we want. We don’t know too much about it yet, but we are looking at laying a polished concrete floor. It can be done to various effects and colours, using colorants, and glass or marble chips. From what we understand so far the process will be to lay a standard concrete floor, then underfloor heating followed by a screed in which you lay your glass or marble chips. When this sets a grinding machine can slice off a fine layer and polish the floor. This is the effect that you see in shopping centres amongst others. We would quite like to create a twinkling, slate effect but at this stage we don’t know all our options so the research continues. If anyone knows anymore about this, the machinery used or anything really, we would be very grateful to hear from you.