A diary of a barn conversion in the Limousin – part 3 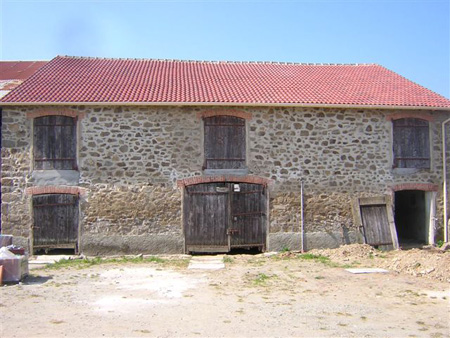 The new roof is on!

It is now the end of March. The roof is completely finished and we’re absolutely thrilled with it. It looks great and it feels like a big step in the right direction. As we had thought (and hoped), the back tiles were in really good condition so were able to reuse them all. The front looks a bit sparkley and new at the moment compared to the rest of the building but once all the work is complete, windows and all, it’ll blend in. The second side was done fairly quickly partly due to better weather and partly as Stuart and I became a lot more confident climbing across the roof. It’s easy to spot the professional out of the three of us however – Ryan manoeuvres his way around the roof like a light footed gazelle whereas Stuart certainly tests the strength of the timbers with his elephant feet. And me, in the right costume I could be taken for Spiderman the way I cling on with all fours!! We may not be pretty at it, but at least we’ve done it and with all the rain we’ve had recently we are in no doubt that it’s watertight!

We’ve even got guttering on now which makes a huge difference as the front is no longer like a mud bath every time it rains…it’s quite worrying that such little things make me so happy…!!

Ross came along with his mini-digger to dig out the trench for the water from the road up to the barn – why do you never have a camera when you need one?? We had a real ’Jeremy Beadle’ moment when poor Ross was backing the digger off the trailer and in slow motion it tipped over backwards with Ross still in it! It reminded me of a tortoise stuck on its back with its feet waggling in the air but no way of righting itself!! After the entertainment Ross worked really hard all day and the job was done so that’s another one crossed off the list! 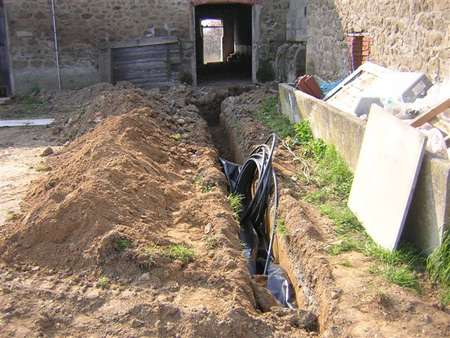 The next stage of the project has been to remove the floor. Two thirds of the floor area is laid with a concrete screed and the remaining area is laid with huge rocks in mud but none of the floor is at a consistent level. We took the decision to dig down and start again so that we end up with the floor level that we want and also we can factor in underground pipework that needs to be laid. There were other easier alternatives but we would have compromised on ceiling heights and door heights or would have had to have steps between some of the rooms. With Stuart being 6ft 4, door heights are always an issue!

This is what we are currently working on and are doing it by hand with hand held power tools as we couldn’t risk the vibrations of the pecker attachment on a digger shaking the whole building into a pile of rubble! I don’t suppose this old barn comes with regulation depth foundations!! Under the concrete layer it is all loose rubble so we should be able to have a digger in to dig down to the depth we’ll need. It’s a fairly slow process as physically it is so tiring but also because Stuart is now holding up his end of the bargain and helping Ryan with his roof as well as working so I‘m often there on my own. It is slowly getting there though and I know we’ll be pleased (eventually) that we took the hard option! In fact, as I write, Stuart has just come through the door with a very sad looking hammer drill. It had been making a slightly unusual noise today so we thought it may be nearing it’s end and apparently this was confirmed when bits of it exploded in action. Usually these tools just stop working don’t they?, but no, this one looks like it’s had a fight with a sledgehammer….and lost!!! Looks like I’m doing a spot of shopping tomorrow!

Lorraine & Stuart have their current home on the market. For full property details click here .