Burgundy, living on a small farm 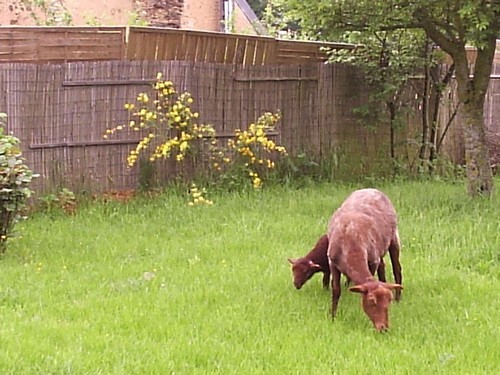 Or Noah’s Ark in the Yonne!

I have lived in France for over 14 years and it had always been a childhood dream to own my own farm. I was brought up by my parents bottle feeding calves and riding horses, so when at the age of 23 I found myself in the centre of Paris living in a tiny Parisian apartment, it came as somewhat of a shock! The closest I came to the countryside was working for 6 months selling flowers in a Parisian florist and I didn’t even have a garden to plant any flowers in!

After a move to the Loiret, I found myself in the middle of a forest with no fields in sight! So there was no hope of bringing my two horses over to France. Anyone who is a horse owner will know that there’s an interesting relationship between a horse and its owner.

Once ‘bitten’ you never lose the bug and when you are away from your animal, a little piece of you is ‘bridled’ and cannot be released. The French call it your ‘garde fou‘, a way of keeping your head and of letting off steam!

In 1996 we purchased a house belonging to my husband’s cousins that needed to be renovated but it was located in the centre of the town. Still no possibility to bring my horses back, I thought to myself, but at least it was our first step on the housing ladder. Auxerre, however is surrounded by rolling hills and green countryside so it was a great compromise between town and country life. It also reminds me a lot of the South West of England where I come from originally. But the idea of finding a house with a little land for the horses never left us.

In 2003 after a lot of house hunting we finally found the house of our dreams, an old longère that had been partly renovated, so we could move in straight away with no repairs necessary and with enough outbuildings to eventually make several gites. The longère was situated on one and half hectares so that would be great for the horses and there was even a well for water.
The land however, had be left as waste land ever since the vineyard had been pulled up. Much elbow work was needed before there was any hope of letting a horse loose on it! Trees, black thorns, shrubs and old wooden posts had to be uprooted. Thank goodness we had a big 4WD that came in very handy for this, along with the invaluable help from a local farmer!

By the time we had finished I couldn’t remember what high heeled shoes looked like anymore and my hands were covered in blisters and calluses. It was just as well that I didn’t have to shake hands with the neighbours, the tradition round here is four kisses on the cheeks. I even ended up jumping on complete strangers for kisses when I met them rather than have to present my hands! I think they thought that English women are very forward but anything to hide the truth!!

A Great Swiss Mountain puppy called Vega was purchased, two cats followed, two sheep, and one dwarf rabbit along with thirty goldfish to go in the pond.

In 2005 after much change in my personal life I had to make a choice to either return to England, or try to make a go of it on my own with my children in France. After weighing up the pros and cons I decided that I would never be able to have such a good quality of life if I returned to England. I would certainly never be able to afford a farm, let alone a house in England. So in 2006, I finally decided to bring back my 27 year old Crabbet Arab horse and his one year old female companion.

This was going to be anything but easy. My very old horse hadn’t been transported for over 13 years and never for such a long distance. His companion, a full blooded chestnut Arab mare is very highly strung and above all, I wouldn’t be there at the moment they were to be loaded on to the lorry. The horse transporters Parks International (who are highly recommended) were very understanding but unfortunately had forgotten to bring a calming paste that they normally administer to difficult horses.

An hour after their estimated loading time, I had a very worried call from my sister telling be that Poppet, the older horse loaded up like a dream, but it was absolutely impossible to load the youngster. She had reared up and fallen over, hurting herself and my sister now couldn’t get her anywhere near the lorry.

To top it all, Poppet could hear all the fuss outside and despite his advanced years, had broken out of the lorry to join Princess. The horse transporters also had other horses to pick up afterwards and time was running out. “What do you want to do? The horses are so stressed out I think we should give up!” said my sister.

What could I do, hundreds of miles away? If I said give up, all my projects with the house and field would have been in vain. Luckily, my first reflex was to call the vet who arrived within 10 minutes and promptly sedated the two horses. The vet was very concerned not to sedate the horses too much as horses obviously need to be stable on their feet to travel, so she gave them a weak dose and within half an hour the horses were loaded and ‘en route’.

The horses were over nighted at Dover and arrived the next evening. I was very concerned because we were having temperatures in the 90s but the driver called me whilst he was on the road, to say that he would be late due to the weather. Because of the excessive heat, he was stopping even more to give the horses water which was really reassuring and he also explained that the horses had air conditioning.

When the horses arrived they didn’t have a drop of sweat on them and they unloaded perfectly. They didn’t even seem to take one look at their new home before galloping off round the field to stretch their legs. It was as though they had been living here all their lives, they were so relaxed!

Since the two horses, the family has grown considerably, 40 budgies, 25 Zebra finches, 4 Japanese sparrows, 2 cockatils and 4 Diamond Doves have arrived and they of course have had babies! Our six chickens have now become twelve, and we are now up to 12 dwarf rabbits. My daughter also owns the two luckiest rabbits in the whole of France, Pinky and Perky, who belonged to our next door neighbour who usually eats them but decided to give the pair to my daughter because she fell in love with them. So they have been saved from the fatal French cuisine!

The children also have an interesting collection of hamsters, mini hamsters, Chinchillas, and even squirrels from Chilly!. And this summer I was given a mini Shetland mare for my youngest daughter from a local riding centre because she was too small for the lessons!
She comes in very handy as I don’t have to use the lawn mower anymore! At the last count, my daughter told me that we now have the sum total of 170 animals! I just don’t bother counting anymore. I do however, participate actively in all the local ‘vide greniers’ in order to sell the baby animals. I usually have to insist to go there though, as my two daughters would be more than happy to keep everyone! In our village there are no street names or house numbers since it is quite small, however the farm has been nicknamed ‘l’Arche de Noë’ or Noah’s Ark, it helps when you are getting your fuel delivered when the driver asks for the house with all the animals!

None of my family in England are very surprised that we’ve ended up with so many animals. The love of animals is rather a family thing. If you have been watching the BBC series Vet’s Safari you will have seen my first cousin Emma, taking care of Lions in Africa! My only worry is that my eldest daughter would like Emma to bring us back a lion but I don’t think my neighbours would be too happy if they found it using their swimming pool as a watering hole! I’m sure a Zebra would be a little easier to manage but I think we have enough animals to cope with at the moment!