Diary of a Smallholder

Well I’ve been in France nearly 4 months and it feels like only a few weeks while at the same time it feels as though I’ve been here forever. I moved over here at the beginning of January along with my 4 cats and expected to sign for my house 10 days later. The 10 days being plenty of time for the money from the sale of my house in the UK to be transferred. I had had 7 days between my buyers finally exchanging contracts to completion in which to arrange to hire a 7.5-ton truck and book the crossing for the truck, the cats and myself and pack the contents of the house. Packing proved the most difficult as I love books and very quickly reached the weight limit for the truck and had to abandon about another half truck full of stuff in the UK. I did manage to squeeze about 2 large transit loads into a storage unit that I will bring over as and when.

I was lucky to find both a Gîte and a cattery within a couple of kilometres of my soon to be new home. All looked to be progressing well and the signing day arrived. I duly turned up at the Notaires office along with the 3 brothers selling the farm, my immobilier and the immobilier who was dealing with the brothers. We all packed into the Notaires office and were then told that SAFER had that morning withdrawn the verbal OK they had given on the sale of the property. Apparently a couple of young French farmers had shown an interest in the land and they were now being given time to raise the money if they wanted to purchase!

I was told that I would get a final decision in either 3 weeks, 6 weeks or 2 months, it hadn’t been decided how long yet. I don’t know who was the most shocked in the room but the brothers agreed that I could stay at the farm with my cats, thus removing the cost of renting elsewhere and cattery fees. It also meant I could keep an eye on all my worldly possessions which had been stored in the property since I arrived. It was useful having the cats too as the property had been empty for a while and the mouse population was quite high. 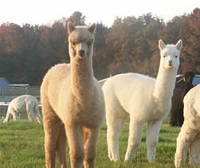 Luckily after 4 weeks, SAFER agreed (in writing) to me buying the farm. It was on my daughters birthday and she was staying with me for the half term so she had the birthday treat of spending a couple of hours in a Notaires office seeing how houses are bought and sold in France.

Before coming out to France I had drawn up detailed lists of what needed doing and when. They were now already a month behind and after another few months I think I’m about a year behind. My brain likes to keep thinking I’m still in my twenties but my body has to keep reminding it that I’m much older! On the positive side though it has given me much more time to actually live in the house and get a feel for the place. I look at the hold up with SAFER as being part of the system that made the place I want to move to so it’s not bothered me too much.

My aim is to turn the property into a smallholding that will provide me with most of my fruit and vegetables and possibly some to sell. I’m also importing some Alpacas next month and hope to increase the herd and eventually have a business breeding and selling alpacas.

Today was a partially successful day, I got the tractor registered. All in all registering both the tractor and the car has been quite simple and everyone at the tax office and Prefecture has been very helpful. I then ‘phoned to arrange the insurance and need to go back to Agen tomorrow with the Carte Grise as the bank needs to actually see it. Luckily I like driving.

Time is racing by yet again! Thursdays trip to Agen was successful and tractor is now insured. It was actually a very useful meeting. I now know that the little green squares people have in their windscreens are not parking permits and have duly cut mine out from my insurance document and placed it on the windscreen. The tractor has it’s as well.

I wish I’d bought shares in IKEA; I’ve bought so many shelves and also had a flying trip to the UK to pick up the ones I’d had to leave in a storage unit as we hit the weight limit on my lorry. 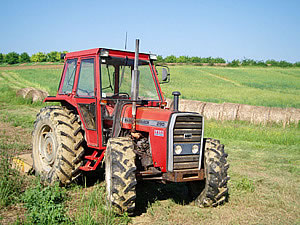 Friday morning was an early start. The fuel for the tractor was due to arrive at about nine. It actually turned up at eight thirty so I was glad I’d set the alarm. The harrow, grass cutter and cultivator I’d bought to use with the tractor began arriving too. Mr Bonnetti, who I’d bought them from, brought them individually on the back of his 50-year-old Massey Ferguson. All I need now is the plough and the tractor its self. Hopefully that will arrive either tonight or tomorrow. Then I have the fun task of learning to use it.

A good nights sleep and then sunshine, what more could I want? Got up nice and late, well it is Sunday, and trundled down to Gamm Vert to pick up a few things, as it’s one of the few shops that open on a Sunday. Except that it wasn’t open because of the election! Oh well I’ll have to go down tomorrow when in compensation it’s opening on a Monday.

Still no tractor so I decided to potter and mow the lawn (a good hour and a half so hopefully it worked off lunch) and then mess around in the garden much to the cats delight. They take it in turns to either sit and guard me or come up and demand attention and stop me from working.

They have really taken to their new surroundings and have all turned into mousers. I was a little worried at first given the French penchant for poisons – look in any supermarket and there are poisons for everything. Hopefully I’m far enough away from most other buildings and it won’t be a problem. A couple of them have also taken a close interest in the lizards so this is now the house of the tail-less lizards. With luck they will get bored soon and I won’t have to spend my time rescuing the lizards. I don’t mind the lizards at all; it’s the wriggling of their detached tails that I find off putting.

A Lesson in Tractor Driving

It was a bit like a white-knuckle ride as we lurched over very broken up terrain trying to cut down the grass that was over 3 ft tall. I was trying to keep out of the way and keep my feet from being under the clutch. I think I’m going to have an impressive array of bruises tomorrow.

It was a really interesting experience. Mr Bonetti doesn’t speak any English and my French is very limited. Luckily my degree (many years ago) was engineering based so I think I managed to understand the basics. It didn’t help having read the UK Health and Safety booklet on tractor driving with all its gruesome tales. That said, tractors are very dangerous pieces of equipment and need to be treated with respect. I remember an uncle of mine who had farmed most of his life and had lost various fingers through working on the farm.

Tomorrow I’ll have a go on my own. I’m making sure I have my mobile on me and am planning to get some practice on the flatter fields and then progress to the field that was left in the just ploughed state last year, when I’ve gained some confidence. It was that field where even in the slowest gear the tractor was lurching everywhere and the grass cutter kept catching.

After that I just have to learn to use the plough, the disc cultivator and the tine harrow! Easy peasy – I don’t think.

Only other excitement today was that the slight breeze managed to topple the rotary dryer despite it being set in concrete. Oh the joys of a clay soil. I see a bigger hole and more concrete coming up.

Trouble with the Sprayer

Busy day today; I bought the lambris to make 2 field shelters as it was on offer. So spent the morning lifting 19 packets of wood from shelf to trolley, from trolley to car/trailer and from car/trailer into the barn.. My muscles are definitely getting stronger and I hope I will still be able to move tomorrow!

The afternoon was to be spent spraying the ditches to clear some of the undergrowth. I’d bought a backpack sprayer just for the job but when I got the sprayer out I couldn’t see how to fix the straps and a backpack sprayer without shoulder straps is pretty useless. So a ‘quick’ trip back to the shop in Bergerac was called for. I explained that I though there might be a piece missing but was assured there wasn’t. They then spent the next three quarters of an hour trying to make sense of the instructions and assemble the straps for me. In the end they telephoned the supplier who gave instructions over the ‘phone. It was one of those things, once you saw how it was meant to work it was simple, but the instructions in the packet did nothing to help.

Then it was back to the spraying. Apart from the ditches, one field has an enormous amount of marestail in it. I’m not sure how best to get rid of it; the books say improve the drainage but this area is at the top of a small hill and along the side of a ditch. It’s probably one of the driest areas I have!