The Annual Cycle of a Cahors Wine Vineyard 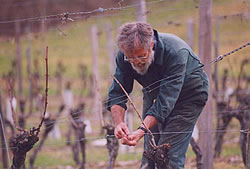 The cycle of the winegrower’s year starts in the spring with the pruning. Since we have only a small area, we have the luxury of starting fairly late, usually the beginning of February. The pruning and associated jobs of pulling off the discarded shoots from the wires and then grinding them up for re-absorption in the soil takes us up to the beginning of April, by when the vines are starting their growth. During this period there’s also work in the chai in preparing and bottling our white and rosé wines from the previous year, plus the emptying, cleaning and refilling of barrels for the red wine. Also there’s work on marketing activities – preparing and sending out publicity material and newsletters.

The second big job in the vineyard is shoot thinning, which is tedious, skilful and very important for quality. This is followed in May by pulling in the new shoots so that they attach to the wires rather than flying off in all directions. As soon as there are significant new shoots on the vines, the protection against diseases and parasites begins, and continues until August. How much and what to do depends very much on the weather – a good sunny year means less spraying, less work, less pollution and less expense! 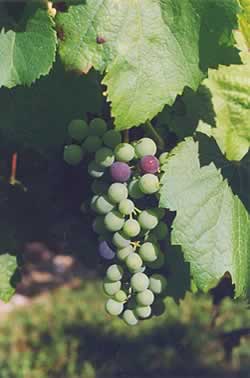 Until the vines stop growing, usually around mid July, attention is needed to keep the shoots tied in and to trim the growth by machine – otherwise they would go on growing right above the wires until they fell over! July frequently means grape thinning or vendange vert to reduce excessive crop size and ensure quality. This is perhaps the worst vineyard job – it’s very negative throwing away healthy grapes, it’s hard backbreaking work usually in summer heat, and it takes a long time – but it’s got to be done! In the early summer, the red wine is prepared for bottling, which takes place either in early summer or at the beginning of September.

July and August are very busy commercially, as a lot of our customers are summer visitors, and it’s part of our sales policy to spend time talking to customers about the wine and about winegrowing. 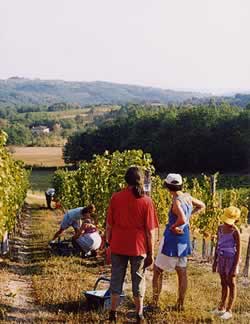 In September we start sampling grapes to monitor the ripening and decide on the harvest dates. The whites are done first by hand with the aid of friends and customers – the red usually into October and done by harvesting machine. There’s then a hectic period of fermentations in the chai. By the end of November things have quietened down and we have two months with less pressure – but then there’s maintenance work to be done on buildings and machinery, plus the usual DIY work in our house – there’s not much time for that during the season.

So it’s quite hard work. As with any business where you live on the premises, it can be hard to switch off and relax. At best we have half a day a week off, and we take very little holiday, because of the twin demands of agricultural work and, in effect, running a shop. The results of our labours are our red, white and rosé wines:

Each year we age about half our Cahors in barrels of French oak for about 14
months. The barrels are fairly new, a quarter being replaced by brand new barrels each year. This provides our Fûts de Chêne wine. A different style of wine is made by aging in older barrels which have already been used for four wines. This wine (the Réserve) has the rounded tannins of a barrel-aged wine, but only very slight oak taste. Finally, a proportion of the production is aged in vats and bottled relatively early to provide our ‘Classique’ Cahors.

All our Cahors is made 100% from the Malbec grape (also called Cot and, locally, Auxerrois). In France, this variety is almost unique to the Cahors area, but it is widely grown in Argentina, and also in Chile. Our wines have an extremely dark colour, and are rich and concentrated, but also quite tannic. Our overriding aim is to achieve the maximum fruit in our wine, to balance the naturally high tannin content of the Malbec grape.

This makes them particularly suitable to drink with rich meaty dishes (e.g. cassoulet), and especially meat such as duck or goose. With such dishes, the tannin ‘cuts’ the richness and provides the ideal counterfoil to the food.

All the wines will age well for at least 10 years in good vintages. The barrel aged wine starts life rather more rounded than the Classique, and with the characteristic vanilla and smoky overtones of the oak. In time these will marry with the fruit and become much less obvious, while still contributing to the complexity of the flavour. The Classique when young has more pronounced fruit, but will be more obviously tannic – it has perhaps more need of a little bottle age. 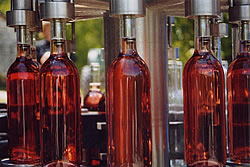 Each year we make a limited quantity of rosé (usually sold out by September). We work to obtain the maximum freshness and fruit in our rosé which is dry and relatively dark-coloured. It’s an excellent wine to drink with meat (barbecues) on a hot summer day when you may not want a heavy red – but it’s very versatile and good with fish and cheese too.

We started making white wine in 2000. It is sold as Vin de Pays du Lot because (as yet) there is no appellation controlée in our area for white (or rosé) wine. But as with our Cahors, we work for maximum quality and our white wines are up to the level of many of the best AOC whites.

We have one parcel of sauvignon vines and two of chardonnay. The sauvignon produces a very aromatic and fresh wine, while the chardonnay is fruity, rich and concentrated. Both wines are dry. Each variety is normally bottled separately to provide our La Combe (sauvignon) and Le Clos (chardonnay), named after the vineyards from which they come. We are considering fermenting a small proportion of the chardonnay in new oak barrels, to provide a premium white wine. However we are well aware of different personal tastes, and if we adopt oak fermenting, we will also continue to make and bottle a part of our chardonnay production without the use of oak.

•With thanks to Colin Lawrence, Mike and Sue

To learn more about Mike and Sue’s experiences in France, see we bought a vineyard .