The Basic Tools of Development

French primary schools (also known as “écoles élémentaire”) cover the ages six to eleven with five courses of study, one for each year:

This timescale covers the equivalent of British Years 3 to 6 and American grades 1 through 5.

Note that it is the calendar year in which your child was born that governs which class they attend. Children born between January 1st and December 31st 2004 will be in the 2010/2011 CP class.

The subjects taught are divided into three main groups:

By law pupils must receive twenty-four hours of instruction per week. The teacher has some flexibility in deciding which subjects to spend time on each week. The revised curriculum established in 2008 sets up extra class time with individualized help for students lagging behind. See www.education.gouv.fr for more details on this subject.

According to the Ministery of Education, the official aim of French elementary school education is: “to ensure acquisition of the basic tools of knowledge: oral and written expression, reading and arithmetic. Its objective is to stimulate the development of the child’s intelligence, artistic sensibility, manual and physical skills and sporting abilities. It provides grounding in the plastic and musical arts, and, in conjunction with the family, undertakes the child’s moral and civil education.”

In practice, parents will find that there is great emphasis on the basic skills of reading, writing and arithmetic, especially following recent concerns over the high percentage of students who leave school early with poor numeracy and literacy skills. Currently there is a major programme underway to combat illiteracy and new initiatives are being introduced at various levels of nursery and primary school. More at www.education.gouv.fr and www.bienlire.education.fr. 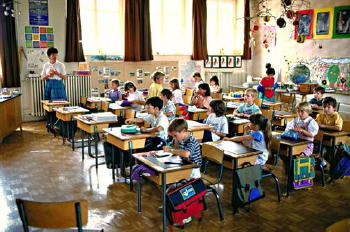 Of particular importance is the ability to read and write simple French by the end of primary school. There are evaluations to ensure that students are grasping the competences, the first at the end of CE1 looks mainly at the standard of reading and writing; the second at the end of primary education, CM2, includes grammar, elementary calculations and the four basic operations (addition, subtraction, division and multiplication). Although French children will be expected to have reached this milestone, clearly foreign children are given leeway and time to learn these skills depending on the age at which they start. To start off with they may be placed in a lower class than their usual age group in order to learn at least some French without the additional pressures of a higher study level.

Will they teach English?

English is one of the languages that can be taught as a foreign language in primary school. The teacher chooses the language she wants to acquaint her students with. For this reason your child may be exposed to the rudiments of English one year and Spanish the next. The quality of instruction may vary considerably according to the skills of the teacher and it should not be relied upon as a substitute for teaching your child to speak their native tongue better! In fact, it has been noted on many occasions that English speaking children joining French primary school quickly become fluent and articulate in French, but don’t necessarily progress much in English unless their parents make an effort to help them, perhaps by using some of the curriculum materials from schools in their home country.

Although teachers have some flexibility in how they spend the teaching hours, many parents find that there is less time spent on creative activities such as arts and crafts and on sports activities when compared with, say, a UK primary school. It is quite common practice therefore, and almost expected, that parents will encourage their children to take part in classes organized outside of school, typically on Wednesdays, Saturdays and after school. The local Syndicat d’Initiative or Tourist Office will be able to advise you, as will the mairie or town hall of your city or arrondissement. Leaflets inviting you to join a dance class or sports club, distributed at school or in front as school lets out, might also turn up in your child’s school bag.

In rural areas, many primary schools are obligated to reorganize in order to respond to the declining population in small villages. Many a small village contains the old Ecole (sometimes under new ownership!) standing as a testimony to the migration of parents to towns and cities. To keep the remaining schools open there are a number of initiatives at the local level, including the sharing of resources amongst a group of schools or the division of classes so that certain grades are in one local school and students move on to a school in a neighboring area or nearby community as they progress.

Parents have the opportunity to find out about plans for the future and changes in structure or organization. They can participate by attending the parent/teacher meetings that take place generally at the beginning and at the end of the school year or by joining a parents’ association (association de parents d’eleves), if there is one or by becoming a member of the “comité des parents” which is a board of parents who are elected – in most schools – and who represent all of the parents in the school.

Amongst the list of items you will be expected to purchase for La Rentrée (see Materials and Provisions) is a agenda (diary) and one or more cahiers (exercise notebooks). See also Materials and Provisions These will be used not only by your child, but also by their teacher who will write messages for you – usually homework or administration related information. As is common in most schools you are expected to sign the book to show that your child has completed the task or that you have seen the message if there is something addressed to you. In some nursery and primary schools there is a “carnet d’correspondance” which is used only for maintaining communication between the school and the parents. If you want to take an appointment with a teacher or the school principal, you are expected to use this notebook to do so.

Most primary schools located in suburban or rural areas benefit from the use of a school bus. Your Mairie or the teacher will be able to give you the details, and you can then request a pick-up and return for your child if you don’t wish to take them to school yourself. Some parents find that the extra time spent on the bus makes the school day quite long for young children, but other children seem to enjoy the experience.