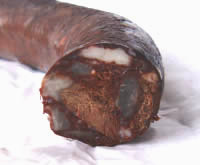 ‘Boudin noir‘ sounds so romantic, but these French blood sausages certainly not glamorous objects! They are basically the black pudding of France, and a good example of the charcuterie ethos; use every last bit of the pig. The French take great pride in making their boudins, using natural casings stuffed with blood, fat, cream and seasoning. Sometimes optional extras go in, such as onions, garlic, chestnuts or chunks of meat, but whatever the variation, boudins always taste divine, with a luxuriously velvety texture.

Traditional British black pudding usually contains oats. Historically, this addition bulked the offal out and made it a more filling meal, and it is a perfectly delicious way of making it – as long as there is not too much cereal, and it is balanced with creamy, fatty and peppery unctuousness. However, those folk who used to look forward to black pudding as a special extra with their fry-up have undoubtedly become increasingly disappointed with what is on offer.

Currently in Britain, it is usual to carefully unwrap this supposed treat, only to find a dry, cereal and breadcrumb sausage, with plastic casings, a touch of blood and a few colourings and preservatives. Not a mouth-watering sight. Even black puddings that claim to be ‘traditional’ or ‘real’ are often packed with unnecessary crap, have been through unnecessary processes, and encased in plastic. Having anticipated tucking into a succulent slice of black pudding, you end up ignoring the obvious faults of what is on offer in the shop, and buying the parched, low-fat versions anyway. Always a disappointment! This is probably why decreasing numbers of people bother to buy the stuff.

As a French resident, it is irritating to observe British friends and family, who feel happy to eat the familiar (usually horrible) black pudding, but are repulsed, or at least challenged by the French boudin. This is because it is too much like eating…blood. The loose, creamy texture is off-putting due to the lack of extra elements with which to distract the diner from what they are actually eating. Oats obviously bring individual and enjoyable attributes to a blood sausage, but old-fashioned black pudding surely was not so stuffed with them that you could not taste the main, very noble ingredient? Despite there being so many recipes and regional variations of boudin noir in France, which contain extra ingredients, such as ‘boudin landais‘, with pig’s head meat, or the slightly spicy ‘boudin antillais‘, quantities are such that none of the additional ingredients dilute the rich background flavour or texture of the blood.

The concept of black pudding is not exactly outrageous. Hundreds of blood sausages, and other blood-based products, are relished by many people around the world, every day. So, hopefully, the growing interest in honest charcuterie in the UK, and in buying local produce, coupled with British squeamishness for the boudin noir, will create a larger and more varied market for excellent, truly traditional British black pudding. In the meantime, I’ll just have to make do with lots and lots of delicious boudins.

Previous Article Ce n’est pas grave!
Next Article The Seine Side of Life