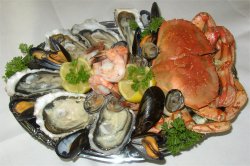 For 4 people: (as a main course)2 crabs (my cleaning lady tells me that, if left in water with a dash of vinegar all afternoon, they’re somewhat ‘sleepy’ and thereby don’t suffer as much when their final moment comes…..debatable…….have never had a chat with a crab so it’s difficult to tell!! ) Anyway, cook in cold, salted water, although there are various schools of thought on this one too – some say boiling water kills them instantly, others say that they prefer the cold water as it reminds them of the sea…….who knows?
Once the water has boiled leave them simmer for 20 mins. Then, remove them to prevent further cooking………leave to cool….delicious!

500g prawns……cooked in cold water, once boiled and they change from grey to orange, they’re done. Remove and leave to cool.

4 langoustines (Dublin Bay prawns?) per person….Once the water has boiled, leave them for 3 mins. Remove and cool

500g seasnails……wash thorougly, put into cold water and once boiled leave to simmer for 20-25 mins. Remove from water and cool.
6 oysters per person – just opened

Serve the ‘ensemble’ on a bed of seaweed on a massive platter placed in the middle of the table. 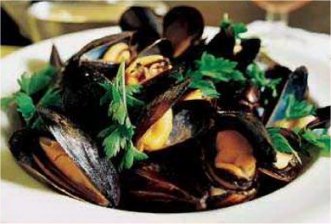 Here in France, it’s possible to order ‘un plateau de fruits de mer’ at all fishmongers for about €12 per person (depending on what they put into it, of course…lobster may be added and thereby increases the price considerably) – just give them advance warning….at least 24 hours. During the Summer it’s a fab treat…..If on holidays, ask the fishmonger (le poissonier) to open the oysters for you – they’re used to it and it’s a somewhat delicate business……They provide all except the mayo and the vinaigrette!(but include the finger wipes and the lemon!)
However, having taken the time to prepare my own seafood platter, I don’t believe I’ll be ordering again…..The final result is definately worth the trouble……a much more subtle flavour…..

P.S If you have chickens, they’ll enjoy the leftovers…..the shells of the prawns are great for helping their egg shells apparently!