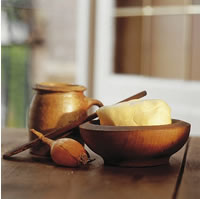 Combining aspects of “Armor” the landscape of the sea and “Argoat” the landscape of woodlands, Breton gastronomy has over the years benefited from all the riches offered by the natural environment. Great travellers, the Bretons also enhanced their traditional cuisine by using spices and products brought back from the four corners of the globe.

Breton cuisine is characterised by its simplicity and the quality of products used.

Typical Breton specialities,crepes and galettes
come in a wide variety of tastes and textures, depending on the regions. The main difference resides in the composition of the batter. The galette is prepared using buckwheat. These are savoury pancakes garnished with ham, cheese and mushrooms. Crepes are prepared using wheat flour and are sweet. They are usually washed down with cider or a special type of milk (“lait Ribot”).

The Breton Far and Kouign-amann

The Breton Far is a flan based on eggs and milk. Available in many versions, the Farz Forn

remains the most well known. For example, rum or plum liqueur can be added to the batter. Cinnamon and vanilla may be used to lend a hint of exoticism to this homely pudding. From an originalrecipe of Douarnenez, Kouign-amann
means “Butter Cake”. It is made from risen dough, with the incorporation of salted butter, using the same method as for flaky pastry. The quality of the salted butter and the time the dough is allowed to rest are vital elements in the successful preparation of this Gateau.

Thanks to its extensive coastline and the multitude of fishing ports, Brittany reaps the harvest of the sea. Shellfish are the flagship of Breton cuisine. Many varieties live on the beach strands, such as razor shells, “palourdes” and “praires” (types of clam), cockles, whelks, ormers, prawns and shrimps. Mussels are cultivated on special hurdles, known as “bouchots”, together with varieties of oyster, depending on the region. In deeper waters Coquille Saint-Jacques, langoustines and lobsters are caught. Brittany is also home to a variety of edible crabs, such as the so called “sleepy” crab, the green crab, the velvet and the spider crab.

The Breton coast teems with hundreds of species of fish. During fish auctions at ports there may be sardines, pollack, mackerel, bass, angler fish, sole, place, ling, hake, skate, conger eel, turbot, bream, wrasse, whiting…And the Breton rivers contain many fresh water fish such as salmon,trout or the carnivorous species

After picking, the apples are stored in canvas bags, sorted and piled up according to the variety, sweet or bitter. Cider can be sparkling, traditional, dry or sweet. The cider of Cornouaille was the first product from Brittany to be awarded “Appellation d’Origine Contrôlée” status, taking into account criteria such as the number of hours of sunshine, the rainfall, the altitude etc. The regions of Fouesnant, Hennebont, or Val de Rance and others also produce good quality cider.

The brewing tradition in Brittany goes back to the XVII century. Thanks to renewed interest from young brewers, small scale production of artisan beers has survived. The best known Breton brands are Coreff de Morlaix, Lancelot, the buckwheat beer Telenn Du and the wheat beer
Blanche Hermine.

The Breton name for mead. This liqueur is known as “chemillard” in Gallic regions and “chouchen” in Brittany. An alcoholic drink based on honey and water with the addition of yeast, mead ferments rapidly but acquires its flavour slowly.

This liqueur aperitif is made by combining sweet cider at the start of its fermentation with apple brandy, in the proportions 2/3 to 1/3. Pommeau lives up to the promise of its golden hue: a flowery flavour with the sweetness of apples and warmth of the sun. 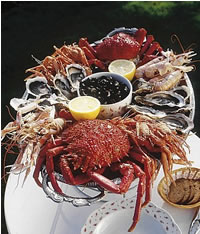