Truffles recipe of the Languedoc 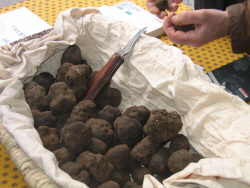 For those who believe that the truffle only grows in the Périgord, think again. The black truffle is also cultivated in Provence and the Languedoc. Truffles are sold in season at markets in Bagnols-sur-Cèze (Wednesdays), Anduze (Thursdays), Uzès (Saturdays) and Clermont l’Hérault. According to the statistics of the CTIFL the Gard produced 15% of national production in the 80s, more than the Drome, Vaucluse and Dordogne. 1996 saw an exceptional result of 8 tonnes out of the national total of 40. The largest truffle ever found in France was a 10kg specimen found in the Alpes de Haute Provence in 1860.

The black truffle is also known as the Black Pearl of the Black Diamond of the kitchen. This name is given not because of its price but due to the shape of the spores in the mushroom. It takes a lot of patience and loving care to cultivate truffles. They are very sensitive to frost or to extreme heat. The Truffières du Soleil plantation, near Uzès, was created by Michel and René Tourayre and Serge Agullo in 1992. They have an oak plantation of 15 hectares where truffles are cultivated, and now sell fresh truffles and preserved specimens all year round.

All truffles are white when they first appear in May or June but they turn grey and then brownish black. The black truffles are the juiciest and are harvested from November to February. It is possible to discover where they are growing: if there is a bare patch under a tree or if there are tiny swarms of the particular type of fly that feeds near them. They can also be found by using specially trained dogs or pigs, as you can see demonstrated at one of the Truffle Fairs in the region. 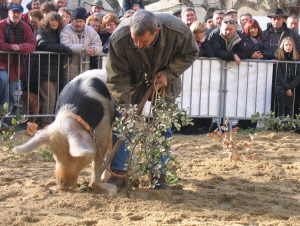 It is said that the animals become intoxicated by the odour of the truffle to the point of addiction, but perhaps someone can explain this to me?? The black truffle of the Perigord is the most famous of France. The white truffle from Piémont or Alba is the typical Italian variety and has a delicate flavour. The grey truffle of Champagne or Bourgogne is brown with black veins, and is less aromatic and less expensive than the black or white varieties. The summer truffle, also called the truffe de la Saint-Jean, is dark brown when mature, with white veins. It has less flavour and aroma than its cousins.

Buying Truffles
If you have the opportunity to buy truffles at one of the specialised markets in the region, ensure that they are clean. This will help you as ascertain their quality. They should be firm, smell strongly with a marbled flesh, and be black or dark brown. They should be eaten within ten days of purchasing. 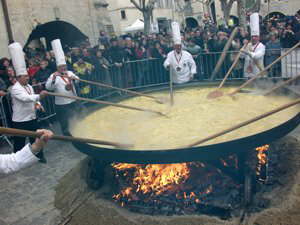 Giant truffle omelette being made last year in Uzès.

oil. Fresh ruffles can be grated over salads or in pasta. They can also be used in omelettes. The oil or juice of truffles can be used to add flavour to just about anything: oil, vinegar,

Recipes and Ideas for Truffles:

For those who want easy truffles recipes here are some simple ideas for using truffles:

1. Cut a French baguette into thin slices, and cut very thin, raw slices of truffle. Toast the bread lightly for 30 seconds. Grate a small amount of garlic onto the bread, dribble with olive oil, and spread the truffle slices on the toast, sprinkled with a little sea salt and ground pepper. Drink with a strong red Cahors wine.

2. Grated in an omelette, in a green salad or with pasta.

3. With fish, by adding some thin slices of truffle over the fried fish just before serving.

4. With potatoes: peel two potatoes, rince them and cook for 1h15min in the oven at 180°C in silver foil with a spot of butter. Heat 250 cl of cream with 50g of truffles, washed and brushed. Season and put aside. Cut the potatoes into halves. In each plate place two halves of potato and a teaspoon of the truffle cream. Cut the truffle in fine slices and place them on top of the potatoes. Dizzle with olive oil and ground salt and pepper.

30g tiny pieces of truffle preserved in juice and
8 eggs

Slice the truffles thinly, mix with the eggs. Add the juice from the can/jar.

Leave the mixture to marinade between 1 – 24 hours.

Beat and cook, adding seasoning.
When serving, decorate with two or three slices of truffle. Delicious! 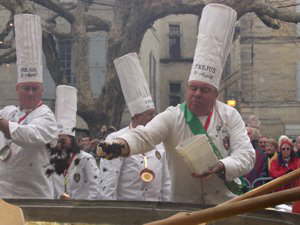 Adding the truffles to the omelette, Uzès