First published: 24th May 2005 by FrenchEntrée 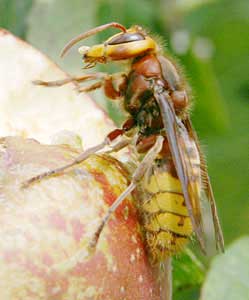 As Summer approaches more and more hornets are seen flying around. FrenchEntrée-Limousin decided to find out a little more about these creatures which are at the centre of so many myths. The majority of people consider hornets highly dangerous. There is quite a significant hornet population in the Limousin and myths abound such as “Seven hornet stings kill a horse, three an adult and two a child”.

However it is comforting to know that hornets are actually quite calm and placid. Like most nest building insects, hornets will defend their colony when they consider it threatened.

Therefore the behavoir of hornets is divided into two categories: Firstly, that in close vicinity to the nest 2-3 metres, and Secondly that outside the nest area. In the presence of a hornet four things should be avoided: rapid movements, blocking the flight path and lastly vibrating or disturbing their nests.

Outside of the nest area hornets never attack groundlessly. They are peaceful insects, shier than honey bees, which prefer to evade conflict. Scientifically it has been shown that stings of hornet are no more dangerous than bees and wasps.

Infact a hornet sting is 1.5 times weaker than a honey bee. However a hornet’s sting has 5% more acetylcholine which stimulates pain fibres more than the stings of bees and wasps, so a hornet’s sting may be more painful.

If you are stung, cooling the area affected can be soothing, in exceptional cases the sting can trigger an allergic reaction, in which case consult a doctor.