Horses in the Quercy 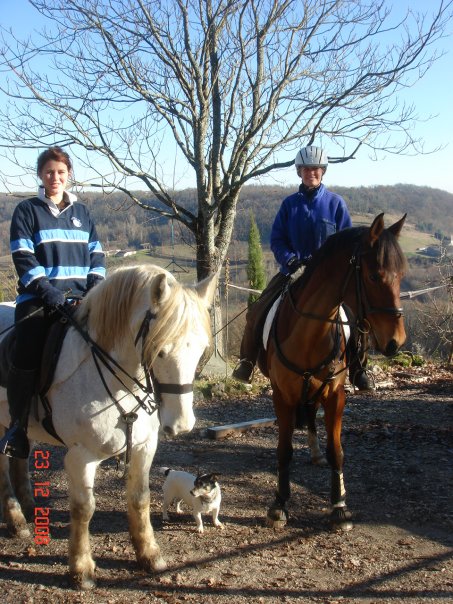 Moving house, they say, is the third most stressful thing after death and divorce, I disagree, moving one’s beloved horses to a foreign country far eclipses merely moving some sticks of furniture and a load of boxes from one house to another.

We moved from Scotland to France in October 2003, we drove out two 4×4’s pulling heavily burdened trailers but neither contained my precious horses, they followed two weeks later in the lap of luxury in one of those enormous five star horse transporters with air suspension and enough haylage to satisfy even a Highland pony’s appetite!

My delight at being reunited was soon quashed when I realised my Thoroughbred mare had lost a shoe, not a serious matter at my yard in Scotland where my ever helpful Farrier would pop over at very short notice to sort such a problem, but here, in South West France where we knew no one and didn’t even know what a Farrier was called (despite my husband having very good French). Four Maréchal-Ferrants later I finally found a good and reliable one. 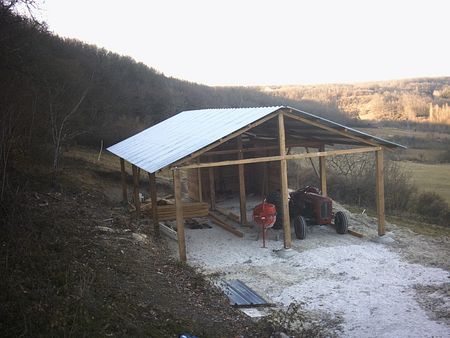 Another matter was feed, we trotted off to the local grain merchants, expecting the usual array of ‘Leisure Nuts, Competition Cubes and Stud Mix etc’ and were shown some Lucerne pellets and flaked maize; well, I thought, “they aren’t doing much work, so as long as they have enough good hay they will be fine” but that was the Autumn of 2003 the year of the great canicule (heatwave) and little hay had been made, finding hen’s teeth was easier. Eventually we managed to find one round bale of the most expensive hay I had ever bought and fifty small bales of Lucerne, normally about a month’s supply for two greedy horses, but this was to last the winter!

Our lovely neighbour Alain had taken pity on us (or our horses) and offered us his large, but rather overgrown field for the winter, fantastic, at least the horses had something to eat, but then we learnt about the ticks which colonise ‘rough’ pasture, my husband came home one day to find me sobbing, having just removed over 150 ticks from the two horses, he went straight to the local vet and came home with two phials of highly toxic liquid which is for treating infestations of virtually everything in cattle, rather dodgy, but desperate times etc….it worked and the horses lived to tell the tale, but the ticks didn’t. 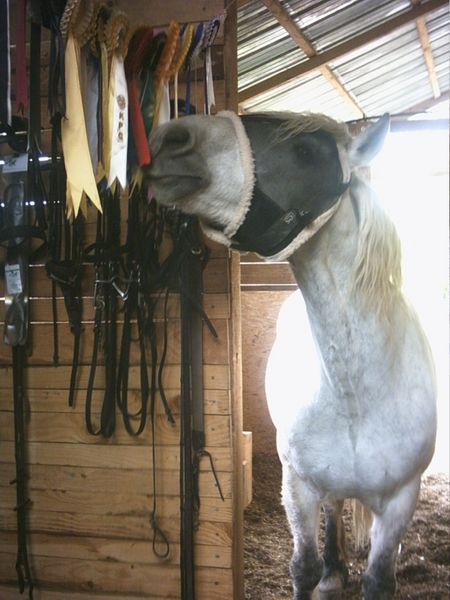 Look at all my rosettes

Some friends came to visit us in the January after we had arrived, their daughter had worked for me at my yard in Scotland, they left under the impression that I was suffering some sort of ‘post traumatic meltdown’ after seeing the state my horses were kept in and the fact that their tack was lying in a mouldy heap rather than the serried ranks of sweet smelling soft and shiny leather that had adorned my Scottish Tackroom!

Life moves on, I now have the clean shiny leather hanging in my tackroom, I have two well fed and tick free horse, we have all survived the experience and learnt from it, to avoid the steep learning curve that we ascended, do a bit more homework than I did before arriving here and bring a good supply of feed with you! For a really good website for the translation of all those ‘techy’ horsy terms go to www.lexiqueducheval.net which has been of infinite use to me when setting up my own horsy business, speaking to vets, farriers etc. Good luck!