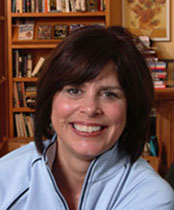 You may have seen the ad: “A little stone cottage in the south of France, full of character, thick stone walls, and glorious view over the vineyards. Every chilly Northern European’s dream.”

Well, chilly Francophiles the world over have the same dream. Several years ago, besotted by the sunshine-and-grape-dream during a long winter in the American Rocky Mountains, I conjured up an idea for a novel. It’s possible I was just thinking: research in France? Cool! The plot took shape. An American loses her husband unexpectedly. That is only the beginning of her troubles. She inherits a stone cottage in the Dordogne from him, something he’d neglected to mention while he was alive. (Yes, I know: fiction!) It appears there’s a reason he never visited his homeland. Lots of them. And Merle Bennett is slated to take on each and every one. Bad stuff happens, but it all works out in the end.

As predicted, research was one of the best parts of writing the novel. Readers sometimes are concerned about the poor author trudging through piles of mouldy books, but as a writer I can tell you research is the fun part. Writing the book is hard work. Researching a lovely village in southwest France where they serve truffle omelets and wine the color of blood? Let me check my calendar…

Before I left home I needed to focus on what issues to research. A novel has a distinct setting but it’s the people who drive the action. I wanted to write about a part of France many Americans have never heard of, let alone visited. Through the internet Americans living in France provided answers to my questions, sent me photos, became pen-pals and then friends. Generous and friendly to a fault, one new pen-pal lived in Bergerac at the time. Later she moved to the Lot, to Cahors then Puy-l’Évêque, and sent me missives describing her adventures. One delightful consequence of writing this novel was almost life-imitates-art when I finally met Sharon in France. What a treat to meet her and her friends and find out more about the expat experience in southwest France. A veteran renovator, Sharon informs me the pace of house repairs in Blackbird Fly is strictly imaginary. Which is a perk of writing fiction.

My research led me to seek out a picturesque bastide village. I used Monpazier as a home base, staying in the lovely Hotel Edward 1re. The village in the book, the completely fictional Malcouziac, is pretty but it is definitely not Monpazier. The only similarity is the structure of the bastide, the stone walls crumbling a bit, the hilltop location surrounded by vineyards and lush, tree-tangled ravines, the narrow pedestrian streets and half-renovated houses. Without the setting the story wouldn’t have come alive in my imagination. When Merle Bennett dreams of France, she remembers the light: golden, warm, nourishing. And she can’t stay away, even if it makes no practical sense to use her last nickel to go there. I may know someone like that, intimately. 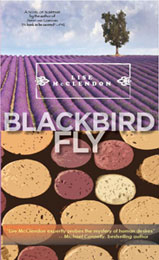 Some five years after that wintry fever dream of France, Blackbird Fly is in print. It’s been a journey, literally and figuratively. I’ve been back to France nearly every year since that research trip but have yet to realize that dream of the little stone cottage. I guess that means I have to go to France even more, at least in my mind. Travel fiction provides that window into places you love, letting your memory or imagination fill in the details — the smell of lavender, the feel of hot stony earth, the shimmer of newly painted shutters, the delight of a cool glass of rosé in the afternoon. Wherever I am, wherever any reader is, a place can come to them through novels.

The title Blackbird Fly is a variation on the Beatles tune. I have a penchant for song titles as my book titles. My jazz mystery series (One O’clock Jump) was easy since it is set in Kansas City in the ’30s, a center for swing music legends like Count Basie. Blackbird Fly, a contemporary story, is a little more complicated but in the end it provides another mental picture — the bird in flight, soaring. You are only waiting for this moment to be free, John and Paul wrote. What does Merle Bennett need to be free of, what holds her back? Who would she be if she broke those bonds? These are the questions of modern life.

Writers wallow around nervously when pitching their own stories, perhaps because they love every character, setting, and pithy line. Sometimes we think a story is about one thing and a reader thinks it’s about something else. Here’s how novelist Jenny Siler, who writes international thrillers as Alex Carr, summarized the book: “A heartbreakingly beautiful story of love, loss, sisterhood, and the ties that bind us together.” I have to say, that works for me!

Here’s how the publisher summed it up: “The sudden death of her husband turns Merle Bennett’s life upside down. Her work for poor legal clients isn’t going to pay the bills and her son is kicked out of school. The blows just keep on coming. Merle finds herself doing what she least expected, decamping to France for the summer to fix up her late husband’s ancestral home. The village in southwest France should be idyllic: warm sunshine, vineyards, and walls of golden stone. Merle gets an off-the-books job as a tour guide at a local winery and evicts a squatter. But the townspeople are more than merely unfriendly. As the past unravels, colliding with modern tensions and the filthy trials of renovation, the summer takes on a dark cast, full of secrets best left buried. In her first stand-alone suspense novel, Lise McClendon reaches deep into the past to find a France untouched by the outside world of tourism and fashion. Writing in a ‘lyrical, often humorous style,’ she brings both the pain and rewards of rebirth and the rich French countryside to life.”

Whether you look out your real window, or the window in your mind, I hope Blackbird Fly brings it all to life for you. Pour a glass of wine and enjoy.

Read more about Lise McClendon and Blackbird Fly at www.lisemcclendon.com