A Recreational Tour of the Riviera 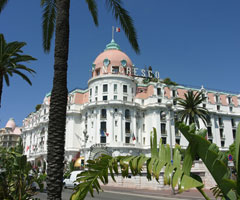 What do you do when you return to a familiar French city? Try something different, of course.

Sitting in a velvet armchair in the Hotel Negresco’s walnut wood-pannelled Le Relais bar, I have to pinch myself. As designer addresses go, this Nice landmark takes some beating, and you could say that I am veering on the smug side of contented. A young chap who might be minor European aristocracy (the blazer, loafers and over-confident manner are clues) is engaged in earnest, one-way conversation with his elegantly mini-skirted companion, while the immaculately white-suited waiters glide around purposefully, collecting emptied mojito glasses and laying down bills for the eclectic if universally well-heeled clientele. Meanwhile, royal portraits look down on me with a knowing wink as I tuck into my second €12 cocktail.

This is my first time in the Negresco, the glorious old hotel on the Promenade des Anglais. Every time I visit Nice – the city which is so well served by low-cost flights from the UK, making it the perfect weekend getaway destination – I love to combine the famous and familiar with something new or different: a quiet corner of the Old Town to get lost in or a new restaurant or bar to try. A weekend exploring the city is the first half of my Riviera double bill that will take in, also for the first time, the stunning villages that sit just back from the coast, Fayence and Mougins. The Negresco’s grandeur is a very fine place to start ticking new boxes.

Saturday morning in Nice means one thing if you enjoy seeing Riviera life at its best: the market. The Marché Cours Saleya, which sits on the corner of the labyrinthine Old Town, is surely one of France’s most theatrical spectacles on a summer’s morning. It’s great to see that Thérèse, the charismatic socca (chick pea fritter) seller, is still wooing the punters with her patter and pancakes, and elsewhere the luscious fruit, veg and flowers on display are as eye catching as ever. Melons, strawberries and oranges – all as fresh and juicy as you will see anywhere – are presented so beautifully. Next I stop for a leisurely café au lait on the place du Palais, during which I witness the full gamut of Nice locals in their finery. From gold-sandalled ladies of a certain age carrying poodles in full make up (the ladies that is, not the poodles, though it’s only a matter of time judging by the pooch pampering parlour I later spot) to tanned young posers strutting their stuff, I see French promenading at its finest, and it’s a great way to pass an hour.

After a lazy, mazy amble through Vieux Nice, with its dense passages rammed with pizzerias, galleries and Provençal mementos, lunch is a real treat. In his uncluttered, stylish restaurant, Keisuke Matsushima gives French classics some Japanese precision and refinement, with fresh flavours and a lightness of touch. It has earned him a Michelin star, and, from me, the promise of a return trip – if only to have another try of his sensational strawberries and cream dessert. The restaurant comes under the tourist office’s new “Nice Trendy” banner, which incorporates all manner of shops, boutiques and spas that epitomise the city’s cooler edge.

This label later becomes pertinent, as my meal there is in stark contrast to dinner that evening, a sorry affair after an afternoon’s lazing on the beach and a pre-dinner apéro in a snazzy pavement bar. The dumbing down of classic French dishes to exploit the lucrative tourist market is a real bête noire of mine, so imagine my annoyance at the lame, undressed salade Niçoise served up at the Café Excelsior. Without a recommendation to go on, it’s tricky finding a decent meal in the tourist hotbed of Nice’s Old Town and I know that the recipe is open to interpretation, but a Niçoise with no olives and with just one tiny anchovy fillet is little short of robbery at €10.50.

See Part Three of Justin’s tour – Into the Country