First published: 12th May 2005 by FrenchEntrée 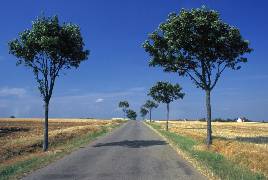 Our love affair with France began many years ago with an argument, when one sunny August we went on a five-day trip to Arras. Being classic car enthusiasts, we took our 1964 MG Midget, which I had rebuilt from a wreck.

I hadn’t driven on the wrong side of the road in a right-hand-drive car for some 25 years, and here we were, topless, (well, the car anyway), travelling round a series of roundabouts near Abbeville with a large white van so close behind I was beginning to think he had got entangled with our rear bumper.

After a few miles, I pulled off the road and gestured for him to overtake, then indicated that I thought he was mad by twirling my index finger close to my temple. Much to my surprise he stopped and jumped out of his van and came across to our car.

As I got out of the MG, I asked my wife Lynda (who spoke GCE-level French) to keep quiet because if there was going to be trouble I wanted all my attention on this Frenchman.

He was in about his mid-20s (which gave him about 35 years on me!), well-built and was approaching me in what I perceived to be a purposeful manner. So, we had an argument, or perhaps I should say I had an argument, me in English with virtually no French at all, and he in French.

His hands were raised and seemed to me to be flailing around like a windmill. After a few pointless minutes arguing, I was becoming quite worried by his facial expressions and hand gestures that seemed to be very threatening. So I threatened him back, by opening the boot of the MG and taking comfort in the feel of a jack handle.

This ended the argument. He got back into his van, turned around and drove back towards Abbeville. This worried me, and I thought perhaps the Gendarmerie would be the next people I would see.

When I got back into the MG, Lynda calmly asked if I would like to know what he had been saying to me. Apparently he had been very apologetic, but said it was the first time he had seen a car like ours, and he had got close so as to be able to see what make it was. When I stopped, he had just walked over trying to ask me about the car and to say he had driven way past his turning because he was so interested in our little MG.

Having been verbally attacked by me, as I had perceived the French way of speaking with gestures as aggression, he responded with that Gallic shrug and palms of both hands raised to the heavens, muttered ‘Anglais’ and eventually just walked away.

I then made a promise to myself to alter my attitude while driving in France and not treat the French like the Old Enemy.

We were usually touring in old classic sports cars, which are so obviously British and we have been rewarded with, in the main, with a very nice, helpful and relaxed attitude by French drivers and pedestrians and on one occasion were signalled to and stopped by a cyclist who warned us that the Gendarmerie were ahead with speed cameras.

A lot of interest in the old chrome-bumpered cars has been shown by all ages, and has indeed been an ice breaker leading to conversations and invitations into homes to talk and have a glass of wine and – once – a potent home-made walnut liqueur.

On one memorable occasion, when I inadvertently reverted to driving on the left-hand side through a village, I remarked to Lynda how friendly the French were as they all waved and shouted to us. We only realised we were on the wrong side of the road when we reached a junction, where a tractor driver, cigarette in mouth and beret on head, sat patiently waiting for us to pass. I cannot repeat Lynda’s comments.

After many holidays touring France with our old classic cars and enjoying the country and the people, and their way of life so much, in 2003 we bought a house in the Charente, and have since spent many happy times there, making quite a few friends. We are rapidly becoming Frenchified and enjoying all the quotidian pleasures of rural French life, including wine, fromage, food and newly made friends.