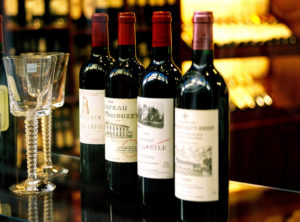 Everything you always wanted to know about wine in brief

The Grape and its Components

The Composition of Wine

Wine is produced from the fermented juice of the grapes of the Vitis Vinifera, a species of vine known to man for millennia, and as its Latin name testifies, associated since ancient times with winemaking. A number of natural factors are important for the successful cultivation of the grape vine, including:

In most countries vines thrive at 800 to 1,600 feet above sea level. Vineyards are rarely planted above 2,000 feet, but there are exceptions, such as Italy’s alpine Valle d’Aosta and parts of Chile where vines grow on slopes as high as 4,000 feet.

Soil types have a determining effect on the character and quality of wines. Grapes from vineyards in sandy or siliceous terrains generally produce lighter, fresher wines to drink young, while those from calcareous clay soils make wines that are richer in body and better suited to ageing.

In cool climate zones grapes ripen best on south-facing slopes with good exposure to the heat and light of the sun. Well-ventilated sites help to prevent the formation of mould on the grapes. Night-day temperature variations, found especially on higher slopes, favor the development of aromatic substances in the grape.

The Grape and its Components

Grapes grow in unches of varying size, consistency and color. The bunch has a stalk that makes up 3%-5% of its weight. For the purposes of winemaking, the grape has three essential components:

The color of a wine is derived from the substances contained in the skins of the grape (yellow pigments are contained in both light and dark grapes; red pigments only in red grapes). The skins also contain tannins and yeasts, the mono-cellular fungi responsible for the fermentation of grape juice.

The pulpy interior of the grape contains a juice composed of water, sugars, acids, mineral substances and vitamins.

The pips of the grape are rich in tannins and oils.

Grapes are made into wine in various ways. The three basic methods vary according to the color and type of wine desired:

In the case of white wines the juice or free-run must extracted from the pulp is separated from the skins (whether light or dark) before fermentation begins. Avoiding contact with the skins means the wine takes little or no color from them.

Rosé wines are made by leaving the juice on the skins of dark grapes briefly before or during the first part of the fermentation to extract the desired amount of color.

In the case of red wines, the juice is left on the skins of dark grapes during the fermentation to extract color, tannins and other substances – a process known as maceration.

In general, the modem vinification process consists of the following stages:

1) De-stemming and crushing: The first stage is the separation of the grapes from their stems. The fruit is then crushed or rotated in cylinders under pressure, a process that breaks the skins and releases the juice or must.

2) Alcoholic fermentation: Grape must have two main components, water and sugar. Yeasts multiply in this solution, consuming the sugars, which they convert into alcohol, and producing carbon dioxide – the phenomenon we know as fermentation, which is characterized by violent bubbling and the generation of considerable heat.

3) Drawing the wine off the lees: When the alcoholic fermentation has converted the must into wine, it is allowed to settle so that the solid matter known as the lees collects at the bottom of the tank. The wine is then pumped into other containers to separate it from the lees.

4) Malolactic fermentation: Most red wines, as well as some whites, undergo an important secondary fermentation induced by bacteria rather than yeasts. The process is much gentler than alcoholic fermentation and often is only made apparent by the small bubbles, which rise to the surface of the wine with a soft buzzing sound. This malolactic fermentation transforms sharp-flavored malic acid into softer lactic acid, lowering total acidity and giving wines rounder and fuller flavors.

5) Stabilizing and ageing: All wine needs at least some period of ageing to stabilize and mature it before it can be bottled. White wines, rosés and reds made to be drunk young are generally stored briefly in large tanks made of glass-lined cement, fiberglass or (best of all) stainless steel for between four and six months. For wines of greater concentration and complexity, whether red or white, the ideal containers for ageing are small wooden barrels. Oak is the best material (there are drawbacks with other types of wood). The ageing process stabilizes and harmonizes wines, and allows the extraction from the barrel of “noble oak tannins” that enhance flavor. Barrels allow miniscule amounts of oxygen to enter the wine, favoring the development of complex secondary aromas, a process known as controlled oxidation. Wood ageing may last from around six months to three years.

6) Refinement in bottle: Young wines are usually stabilized by refrigeration and filtering before bottling and are subsequently stored for one to three months before release. Wood-aged wines are often fined using egg whites or protein compounds and sometimes lightly filtered before they are bottled to remove any suspended particles. Bottled wines are usually stored horizontally for six months to a year before release. In the bottle, in the absence of oxygen, a process known as reduction begins during which the color, flavor and aroma of the wine evolve. It is in this phase that wines develop their bouquet.

The Composition of Wine

Wine is defined for legal purposes as “a water and alcohol solution obtained from the complete or partial fermentation of fresh grapes or grape must.” The basic ingredients of wine are water and alcohol, though other components present in miniscule quantities have a determining effect on quality and character. Wine consists of:

The hydrogen dioxide in wine derives from grape juice so it is biologically pure. It is the essential base for all of the complex bio-chemical phenomena that occur as the wine is made and aged.

The alcohol in wine is produced by sugar converting yeasts. The most important alcohol in quantity terms is ethyl, a monoalcohol, followed by glycerol, a polyvalent alcohol that adds a degree of sweetness and finally by higher alcohols such as proponol, butanol and isoamyl.

Acids (0.4%-1%)
Three organic acids, tartaric, malic and citric are natural components of grapes. The three others present in wine, succinic, lactic and acetic acid (the source of volatile acidity) are produced by fermentation.

The glucose and fructose contained in grapes is mainly converted into alcohol through fermentation. The sugar left in the completed wine varies from around 0.1% (1 g/l) for dry wines to 10% (100 g/l) in sweet wines.

Mineral salts (0.2%-0.4%)
Salts derived from minerals and organic acids lend freshness to the flavor of wine. The most important are potassium, sodium, magnesium, calcium and iron.

Coloring substances (0.01 %-0.5 %)
Phenolic pigments known as leuco-anthocyanins are present in white wines. The color of red wines derives from polyphenols in the form of anthocyanins and tannins contained in grape skins.

Aromatic substances (0.01%-0.1%)
Traces of various chemical compounds contribute to the aroma of a wine. These volatile substances include alcohols, aldehydes, esters, acids and ketones.

Sulfites
Sulfur derivatives are used to safeguard grapes and sterilize and preserve wines. The presence of sulphites at 10 to 200 parts per million is measured both in fixed sulphur dioxide, combined with other substances in the form of gas.