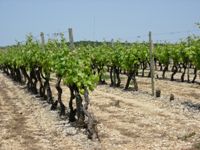 The drink of the gods, the water of life

The English, Dutch and Scandiavians have been enjoying the wines of Poitou Charente since as early as the 13th Century. In the 16th Century the wines were transformed into the ‘eau-de-vie’ and then matured in oak casks to become what we know today as Cognac.

Cognac is regarded as a noble spirit with a woody flavour and sparkling amber colour. It starts its life as a white grape, which is fermented and then distilled and aged in oak casks for many years.

Ageing in oak casks and the blending of spirits of different ages and different origins represent two essential stages that give Cognac its quality and it nobility. The process follows ancestral know-how that passes from generation to generation. The end result is amber nectar.

Cognac is produced in the AOC region that is defined by the decree of 1st May 1909. The area spreads into the departments of the Charente, Charente Maritime, a small area of Deux-Sèvres and the Dordogne. The vineyards cover 80,000 hectares of which 75,000 hectares are white grapes produced for Cognac. The Charente and its 5,365 properties alone represent 50% of the production of these vineyards and of white wine that has the right to be called Cognac. The essential parts of production and commercial activities are concentrated within the region.

The main traders are in Cognac and Jarnac, and they buy direct from the distillers and co-operatives alike. Each of the great names in Cognac carries out its own blending and ageing in accordance with its own tradition. They sell 99% of Cognac.

The National Bureau of Cognac Producers is a private public services organisation that plays an essential role in the Cognac market:

* It protects the AOC and promotes the name of Cognac both nationally and internationally.
* It informs and advises professionals in the area on subjects such as production, storage and sales.
* It also controls the sector.