Wine making in the Lot valley 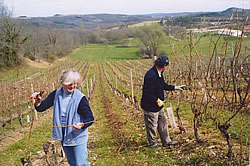 We decided to make the move to France for several reasons – we felt we’d followed our careers in the U.K. for long enough and wanted to do something different, we wanted to live in the countryside, and we liked the idea of living in France, having spent many holidays here over the years. Wine was a natural activity to go for, since we were both very interested (and eager consumers of course!), although it took some time and research to satisfy ourselves that it would make financial sense on the scale we had in mind. We liked the variety of work involved – vinegrowing, winemaking, business management and marketing. Before we finalised on wine, we toyed with ideas such as gîtes and various other agricultural possibilities, which we are now sure would not have been at all suitable for us.

We spent four years looking for a property, at first using holidays and then with one of us full-time in France. During this time we also prepared by doing short courses on viticulture and winemaking at Plumpton Agricultural college, reading up the subject, taking a tractor driving course, and having weekly private French lessons to improve our fairly moderate ability (expensive but well worth it). We looked initially at all wine growing regions and quickly established a short list by eliminating those where land is impossibly expensive or rarely on the market, and those in regions we just didn’t like very much. After that it was a case of spending time looking at properties until we found something suitable.

Under the old proprietor, our property produced rather ordinary red wine that was sold in bulk to the négociant (wholesaler). In the ten years since then, we’ve developed the business by investing in new equipment and buildings and planting more vines. Today all our wine is bottled by us and sold directly, mostly from the property, and we make a total of around 17,000 bottles each year of six different wines, covering red (Cahors), white and rosé. We also have a walnut orchard of some 200 trees and a very small plum orchard which provides prunes (pruneaux d’Agen). These provide a worthwhile sideline to our main business of wine – we sell the nuts and prunes as such, but also use them to make other products such as preserves and walnut bread and cakes that we can sell from the property and at our local market. 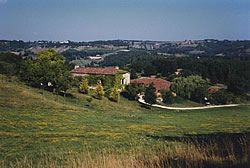 We found that setting up a business in France is pretty much like doing it anywhere else. It’s necessary to have or to acquire knowledge of the business, understand the financial requirements and have the means to meet them, to make sure that there is a market for the product, and to have ideas about how to sell to that market. Compared to these basics, the things that are a bit different about France are relatively minor. However, we think that learning to speak at least good basic French is probably a higher priority than anything else. Apart from the sheer effort of trying to understand and communicate, it’s very easy to find that misunderstandings start to breed suspicion and resentment, ending up with a belief that the French are bolshy and deliberately unhelpful to foreigners, which is usually far from the case.

Because we bought an existing farm, the formalities of setting up were very easy, involving little more than a simple formal demand to be registered as agriculteurs, plus registering for VAT and signing on to the social security organisation for farmers (MSA) who collect the equivalent of national insurance contributions and subsequently pay against social security claims, mainly medical expenses. In most areas the bureaucracy doesn’t seem much different from that in England – officials are mostly helpful and pleasant. One area where we gain is in making and selling alcohol, which is far easier and freer than in the UK – we have no need for formal licences to sell and offer tastings of our product either at our premises or at our market stall. On the other hand, vine growing and wine making in France is subject to a lot of controls that sometimes grate on the Anglo-Saxon mindset! We benefit from a very simple and advantageous income tax system, available to farm businesses with a turnover below a certain threshold. This is called forfait. It works by the tax authorities holding a register of what is grown, applying a standard income per hectare value to each crop and arriving at a notional income on which we pay tax. The advantages are that the standard incomes they use are quite low, and we have no need to keep and submit formal accounts. If turnover exceeds the threshold, formal accounts of real revenue have to kept and submitted for taxation in the normal way.

Because agriculture is still a big part of the French economy, there’s a great deal of help available; this can be invaluable, especially in the early days. In particular we took advantage of the free or very cheap training that’s available (if your French is up to it!), and we get technical advice from several organisations, some of it again free. For this reason, it’s perhaps easier to start up in farming in France than in other kinds of business. Many of our visitors imagine we are having a great time absorbing countless EU grants and subsidies. As far as we know, these are no different than they are in the UK, and in fact viticulture in general gets rather little subsidy compared with arable farming – we certainly don’t get any! 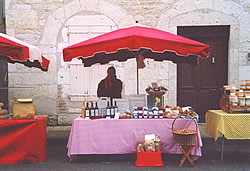 We run a market stall once a week to sell and to promote our products. This makes a bigger contribution to the business than we expected, but it is also a rewarding activity in itself – there is good camaraderie and support within the community of market traders, and the market is an important centre for people of the area to meet and to chat. Most of the traders are, like us, producers selling their own produce, and the cost and formality of acquiring a stall are minimal.

Increasingly we enjoy living in rural France, in particular the lack of pollution of all forms, the lack of crowds and traffic jams, and the human scale of society, and we have little desire to return to the UK. The Lot also offers us beautiful and varied countryside, and somewhat better weather than the UK. Of course we find some characteristics of French people and French society annoy us, but certainly no more than some of those of our compatriots! We think that the fact of living in a rural area rather than a town is probably a bigger contrast than that between living in France rather than the UK. 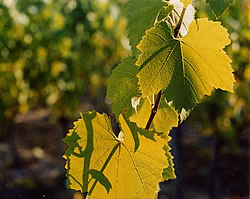 We feel that the very hardest part of what we’ve done was the choice and decision on a property, mainly because it has to be done at the start when knowledge and experience are at the minimum. We’re happy where we are, but there was much more improvement work to be done than met our relatively inexperienced eyes at the time. With hindsight, if we were starting again, we would try to get more active involvement in wine production beforehand, either by taking more extensive courses or, preferably, working with a wine producer for a period. That would have made the assessment and decision on a property a lot easier, less risky and less stressful. It might also have given us some friendly contacts who could have helped us assessing potential properties.

We’re content that we have achieved what we set out to do, and in some respects we’ve been more successful then we dared to hope at the outset. We expected it to be hard work running a vineyard, and it is, possibly a bit more so than we expected, although advancing years play a part in this! But we feel that you get out what you put in and we get great satisfaction in building our business and producing products that people appreciate.

For a deeper insight into wine making, see the winegrower’s year .

Mike and Sue Spring are the owners of Domaine du Garinet, near Montcuq in the Lot Valley. For more information, visit their website , send an email or telephone them on +33 (0)5 65 31 96 43