An error in the making

Pineau des Charentes was not made by trial and error, utilising various grape forms to produce a magnificent wine. No, legend has it, back in the 16th Century, a winegrower accidently poured grape must into a barrel already containing Cognac eau de vie. A few years later the barrel was needed and the owner was somewhat surprised by the marvellous brew. Pineau des Charente was born. Since then, for the last five centuries, the winegrowers have continued to follow the same tradition, passed down from generation to generation.

There are two types of Pineau des Charentes produced today, white and rosé. To be able to call the produce Pineau des Charentes, the cognac eau de vie and grape juice must come from the same property, and aged in oak casks for a minimum period of 18 months.

There are strict methods to producing Pineau des Charentes and its regulated by the National Pineau Des Charentes Committee (Comité National du Pineau des Charentes), which was created in 1949 to defend the common interests of producers and merchants in terms of production, promotion and sales. They have produced a fabulous Information Pack in English which is definitely worth a read if you want to know more about the production, nose, volume, etc. 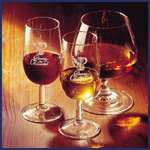 Pineau des Charentes is appreciated as an aperitif, cocktail (for example, pineau and schwepps (tonic water)) and is used in gastronomy throughout the meal with the finest foods. Some ideas from the National Pineau Des Charentes Committee are as follows:

White Pineau Des Charentes:
* As an aperitif or cocktail
* in gastronomy: in a sauce with poultry, with white meat or fish
* to accompany a dessert: ideal with a pineapple tars

Old Pineau Des Charentes rosé:
* As an aperitif or cocktail
* in gastronomy: Fruity cheeses
* as a dessert wine: with chocolate cake