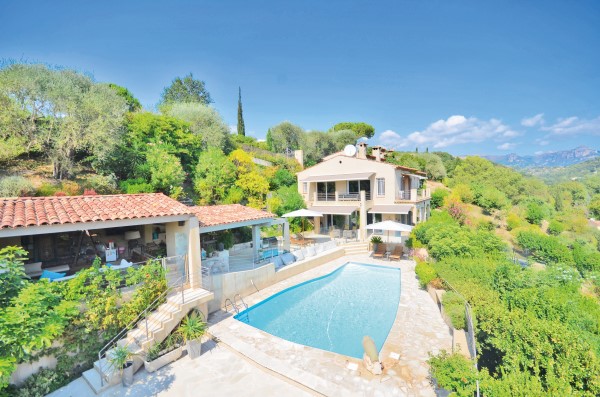 Six years ago, David Reid and Kate Wilde quit the UK for Provence. With a ﬂair for design, they set about creating a wonderfully quirky family home – fun being their top priority, says Nicola Venning

“I do love a bit of taxidermy,” says David Reid with a smile. The entrepreneur and former restaurateur is referring to a large stuffed moose head that graces a wall in the family’s elegant home in the south of France. Opposite, a stuffed dog has pride of place on a comfy chair. “Lots of people think it’s real,” he adds. “The cat lies by it and falls asleep.”

Stuffed animals are not the usual ‘adornments’ found in sunny Mediterranean villas only moments from Cannes and the Côte d’Azur; but then, this is no ordinary home. The Provence-style house, built in 1978, in the quaint village of Saint-Paul de Vence in Alpes-Maritimes, is light and airy with five bedrooms and a relaxing – and distinctive – décor. 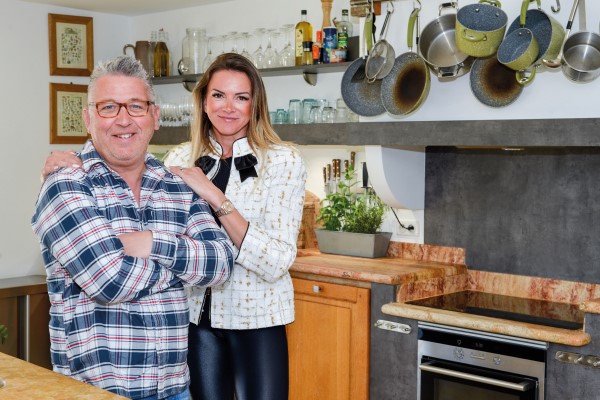 The most colourful room is the rather wonderful Red Salon on the second floor, home to the taxidermy. The “man room”, as David likes to call it, has been styled as a 1930s gentlemen’s club, he explains. David, who lives here with his wife Kate Wilde and their two children, Woody (nine) and Blue (seven), knows a thing or two about creating rooms with ambience.

The family are from Bristol, where Kate ran a beauty business and David was a partner in Loungers, a fun and funky restaurant chain with a colourful, eclectic interior design. When David sold his share in the business six years ago, the couple followed their hearts to France and started creating the home of their dreams. 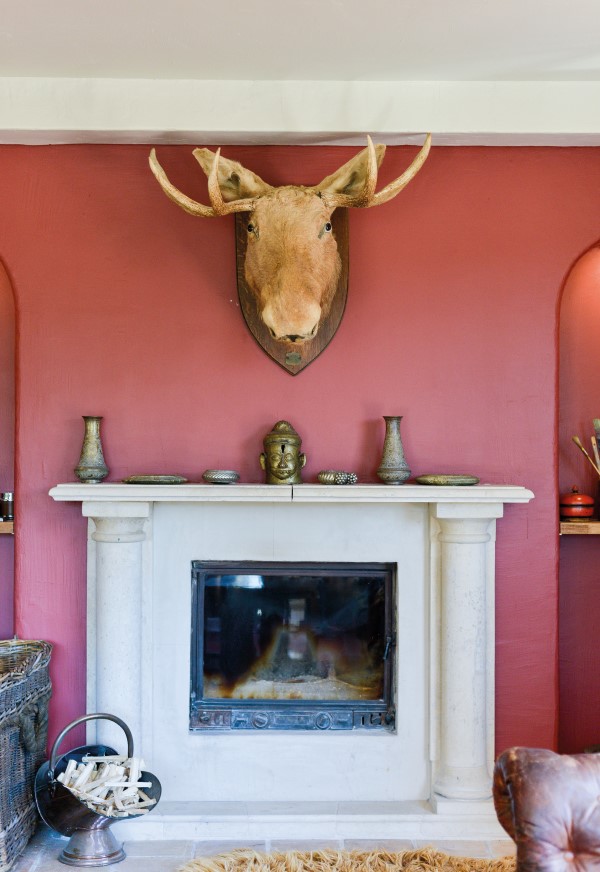 As well as the moose head (which David sourced via Pinterest), the lounge doubles as a games room and is dominated by a greatly cherished, full-sized snooker table. “It dates from about 1880 and is my favourite item,” gushes David who, after searching “all over the country” for a table, found it almost on his doorstep in Bath – though it originally came from the Lord Mayor’s Mansion House in Bristol. A Burroughes & Watts original, David paid £7,500 for it.

“I don’t let the kids near it, though adults are worse! No drinks are allowed near it.” Above the table hang six characterful, red snooker lights that were “handmade by one of the last people doing it, an old guy in England”, says David.  “They arrived in the back of a lorry, all bundled up, and the guy put on a pair of white gloves to unpack them. He was very precious about them.”

In homage to the 1930s, one wall is papered with brown and gold, Art Deco geometric wallpaper. It came from Bradbury & Bradbury, an American company that specialises in art wallpapers. “It’s hand printed and is an absolute bugger to put up, because the design is so intricate,” sighs David.

A lot of the prints and the ‘lived-in’ leather sofa and chairs in the room were found on eBay and Etsy, while the two 150-year-old Moroccan rugs were sourced from UK dealers that David used when he was furnishing the Loungers restaurants. “When we have friends to stay, it’s the go-to room for cocktails. We chill out up here and get the fire going.”

Also on the second floor is a guest bedroom, as well as an airy master suite with a mellow terracotta floor. The neutral décor and whites of the main bedroom are offset by an ornate, filigree, white, Indian-style mirror with matching intricate headboard. Kate sourced them from Maisons du Monde – a popular French interiors chain (which also has outlets in the UK). 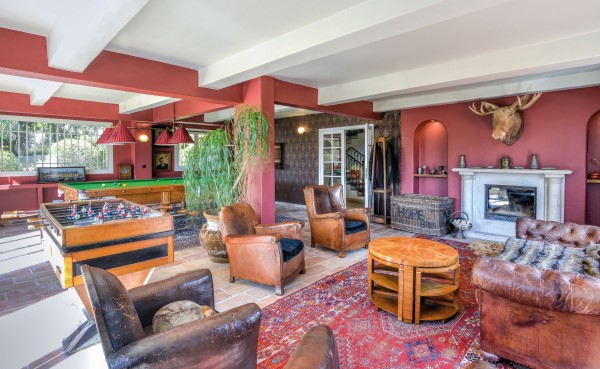 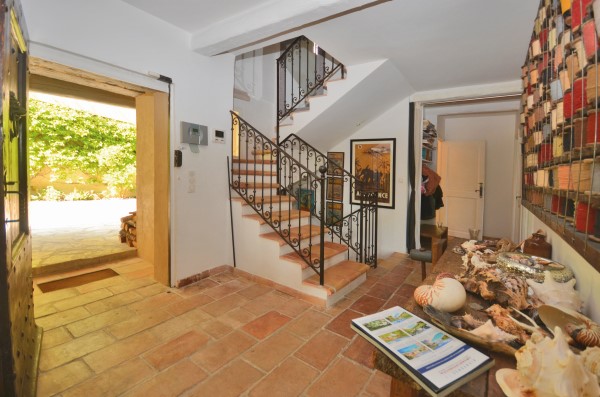 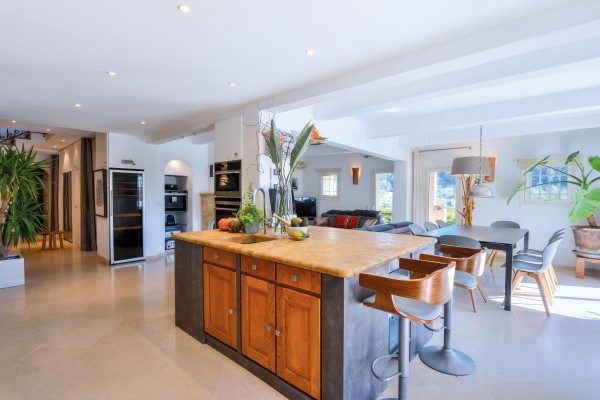 “It’s very nice to put something more ornate in there,” she says. The Eastern décor is complemented by a miniature wooden elephant and Buddha, and was inspired by their travels to Asia – and particularly Sri Lanka, where they also have a home. A warm family ambience is created by the other souvenirs dotted throughout the villa. At the top of the house, as well as another bedroom and bathroom, is the children’s playroom-cum-cinema (which can double as an additional bedroom). Hanging on one wall of this space is an impressive collection of masks picked up in the many countries (India, Nepal, Thailand, Sri Lanka) that the family have holidayed in. “Wherever we visit, we buy a mask and now we have them all along the wall. It’s quite nice,” says David of the 15 or so hanging there.

Other mementos are in the hallway, where an old industrial polished wooden workbench groans under a huge display of exotic shells. “The kids love bringing the shells back and putting them on there. The collection has just grown and grown and, in fact, we haven’t got any more room,” he adds. Above the bench is another curio, an original industrial bobbin rack with reels of cotton that creates a rainbow-like welcome in the entrance hall and reflects David and Kate’s love of design and eclectic tastes. “It’s really lovely with lots of colours,” says Kate.

The couple first saw a similar cabinet in a restaurant in Cannes and liked it so much, that “immediately we started looking for one too,” says Kate. In a real labour of love, after scouring websites and antiques portals, they eventually managed to track one down in an emporium in Lille, northern France, and drove up to collect it themselves.

The hallway, on the garden floor, leads into the large open-plan kitchen/dining/living room, which has a totally different feel to the lounge on the floor above and has been decorated in a more contemporary style. “We’re not obsessed with having ‘old’. We like modern too,” says David. “All our older items work well with modern,” agrees Kate. “That’s part of the beauty of this house; it blends the two, really well.”

The understated kitchen/living room is spacious, airy and decorated in neutral colours with polished stone floors, composite stone worktops and modern De Tonge units with lots of useful storage and counter space. “It’s the centre of the house. We spend most of our time down here,” says Kate. 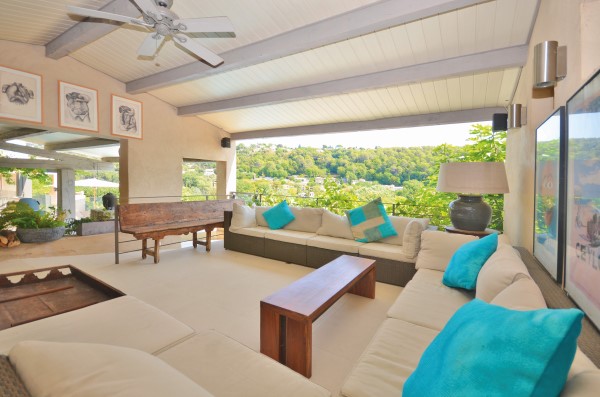 A large, chunky fireplace takes centre stage in the living area and is used to heat the whole house. “We rarely have the central heating on,” she adds. Sitting on the large mantelpiece above the fireplace, are three of Kate’s favourite items: a trio of elegant jugs that the pair bought from a shop in Frome, Somerset. “They are really in keeping with the house because it has a lot of neutral colours: greys and greens, and the jugs are grey and green.”

Several lush green plants dot the room, making it feel homely and lived in. Flooded with light, this vast space has several windows, as well as folding doors that open onto upper and lower terraces and create what Kate calls “outside inside living”.

On the upper terrace is a generous dining area with a large outdoor table and well-used pizza oven. Above it hangs a beaten-copper, dome-shaped metal lamp. They bought it from Mémoire de Famille, an interiors shop in nearby Valbonne, a little town inland that is also popular with the local expat community.

For those flop-in-the-shade days, there’s a double-sized pool house at the far end of the terrace. Used by the family in the summer months, it has a comfy sofa room with vibrant turquoise cushions, and is perfect for (shaded) outdoor living and entertaining and has its own summer kitchen and BBQ.

A short step down, past a simple glass balustrade, is the lower terrace and generous, family-sized pool complete with sunbathing area and sun loungers. The garden flows on from this and leads to a sand pit and pétanque court. 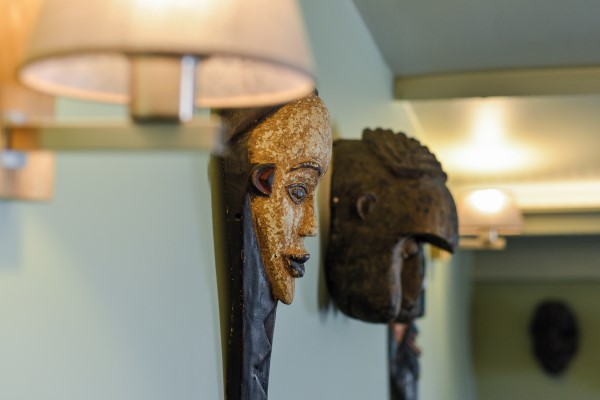 Once the stamping ground of bohemians and artists such as Picasso, Matisse and Chagall, Saint-Paul de Vence is a very chic place to live. With its high-end restaurants (including the world-famous La Colombe d’Or), art galleries and bustling historic centre, the village is a favourite with British and European homeowners.

“Saint-Paul de Vence is one of the most interesting and charming villages on the French Riviera,” says Tim Swannie, director of Home Hunts, a property search agency based in Cannes. “The centre of this medieval village gets very busy in the summer, but it is somewhere that is buzzing all year round.”  Saint-Paul de Vence is a 20-minute drive from Nice airport and a stone’s throw from the coast and the French Riviera. The villa is also just 45 minutes from the nearest ski slopes in Auron, Isola and Valberg.

“Properties in this area range from a large contemporary villa in the hills in need of total renovation (and priced at just under €2 million), to a stone farmhouse with beautiful gardens and a wonderful sea view, which comes in at around the €4 million mark,” adds Swannie.

Despite the fun times they have had here in the villa, David and Kate are ready to move on. Fond of the area, they are selling to find another project to do up nearby. Their villa is on the market for €1.8 million.